Manager of Normal Nutrition, manager of Gym of the Future (formerly)

Torturing and manipulating others into working out.

Manipulating others into working out.

To make sure Dan and the other members do not escape from Normal Nutrition (failed).

Chad Bot is an antagonist in the episode "Dan Vs. The Gym" of Dan Vs.. He was the former manager of Gym of the Future and the new manager of Normal Nutrition.

He was voiced by John DiMaggio.

Dan is knocked over by Chad, the manager of Gym of the Future. He makes Dan look at seductive women watching a muscular guy work out, then he pulls up Dan's shirt by comparing Dan's body build to the unnamed guy working out. Chad gives Dan a free trial membership, then he asks him if he's ready to get sweaty. He then manipulates Dan to exercise and Chad told him to "feel the burn". Elise then asks him how Dan's workout was, then Dan states he "had an organ failure". Chad then tells him that Dan is going wake up tomorrow feeling better than he has in his life. Unfortunately, Dan wakes up the next day feeling horrible. After two days, Dan reveals he is so hungry. He calls Chad by telling him that he needs to cancel his membership. Chad then tells him to cancel his membership within 38 hours.

Dan then goes to Gym of the Future encountering Chris exercising. Chris tells Chad he will return. Unlike Dan, he admires working out, telling him that he is getting more healthier, more athletic and "more attractive to his lady".

Dan reveals he hardly stays up too late. Dan, along with Mr. Mumbles, go to the gym at nighttime, trying to get people less addicted to the Gym. Chad then opens up the door to the Gym, with three individuals coming. Dan turns the radio more fast-paced. Before Chad and the people struggle, Dan tells them to "keep looking stupid". Dan fails to get people to dislike the Gym, then Chad walks right by to Dan greeting him, then he kicks Dan out of the gym with Mr. Mumbles coming to Dan (Note that Chad did not touch Mr. Mumbles). Chris then calls Dan to remind him that he is eating "food that food eats".

Dan and Chris find Chad and Elise in the gym. Elise tells Chad that Chris was supposed to arrive to the Gym, although Chris and Dan are behind her (Elise did not look behind finding Dan and Chris, if she did, she would probably yell at Chris for lying to her).

After when Elise was calling Chris, Dan, along with Chris pursued Chad driving to the Normal Nutrition gym. Dan puts socks on Chris' shirt, jacket and pants. Chris then walks in, then he gets cowardly telling Dan that he's in trouble. Chad grabs Chris inside the gym, Dan runs away from Chad, then Chad closes the window.

Chad then finds Elise, then he summons his "swimsuit models" to kidnap Elise. Dan is brought to Normal Nutrition by the bounty hunters, then he gets up and finds Chad in the lab. Dan then shocks Chad, then later takes him as a circle home.

Chad acts cool around his clients while at the gym, but his true nature is revealed to be a maniacal psychopath with no remorse. He is argumentative and cruel to everyone of those he has enslaved and thinks of anyone who is not an android as "gullible budgies". 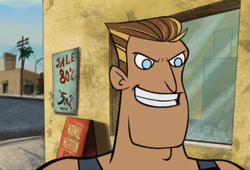 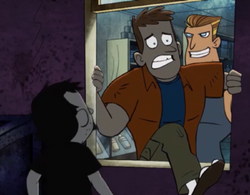 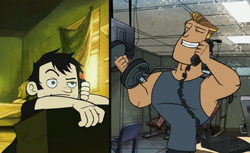 Chad on the phone with Dan. 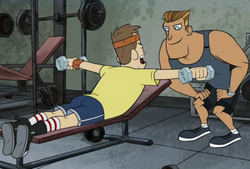 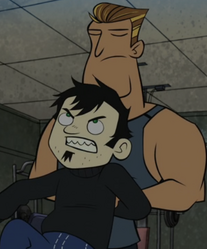 Chad kicking Dan out of Gym of the Future.
Add a photo to this gallery

Retrieved from "https://villains.fandom.com/wiki/Chad_(Dan_Vs.)?oldid=3879900"
Community content is available under CC-BY-SA unless otherwise noted.