Chad is a one-time villain from the FOX animated sitcom, The Cleveland Show, only appearing in the episode "Like a Boss". He was an employee at Waterman Cable, who was sick of the way his boss was treating him, which got him to shoot up the office. At the end of the episode, he shot and mortally wounded Tim and did not get arrested or suffer any consequences for what he did, since this was technically considered "bear hunting".

He is voiced by Nick Puga.

In "Like a Boss", after Tim became the new taskmaster of Waterman Cable, after Tom, the former supervisor dies. Chad became quickly infuriated and overworked by all the rules he was forced to go through, and openly said on the work site that it was enough to get him to want to go on a shooting rampage. He explained to Cleveland and Terry during break, that he'd be shooting up the office, and killing many employees, especially Tim. Cleveland, Terry, and Aaron were surprisingly okay with the idea of him doing this and had a casual conversation with him about it. Cleveland suggested that he move the shooting to Monday instead of Friday, saying that the survivors would probably be lucky enough to get the rest of the week off if he did. Chad agreed to this and said that because he was cool with them, he didn't want them to die and suggested they wear all red to work on Monday.

On the day Chad planned the shooting, he was fired for being "too creepy", hindering his plans. Chad made another death threat towards Tim, causing Tim to use that as an example as to why nobody wants him around there. Chad left the office in acceptance, Cleveland and Terry wore red that day.

Later on in the week, Tim took the office workers out into the middle of a forest for a scavenger hunt. There, he was shot by Chad. Cleveland yelled at him, having completely forgotten who he was and why he did it. Tim was merely wounded and was able to live a happy life, but he still had to step down from being the taskmaster, now seeing that nobody respected him for that job. Chad was not charged for his crime of attempted murder, because he had a hunting license and technically, Tim was a bear and they were in the forest. He had also not murdered any human co-workers, basically getting him off Scott free.

Chad is a Caucasian adult male with brown buzz-cut hair. He wears eyeglasses, with dark reddish brown rims that only cover the top. He wears a blue buttoned shirt with extremely thin, vertical, white stripes. His shirt has a pocket in the front. He wears white, pocketless denim jeans, held up by a brown belt, fed through loops. He also wears tan shoes with white laces and bottoms.

Chad is a mentally-ill, homicidal murderer, who's completely dominated by his anger, which causes him to kill over certain problems in his life. He is not subtle at all when it comes to threats, as he'll make outright statements of shooting places up and scary sounding threats to people. Despite his obvious way of talking, he is still very manipulative, as he knows his way around the legal system and moral scale, which gets him out of trouble, when he truly deserves proper punishment and severe mental help. 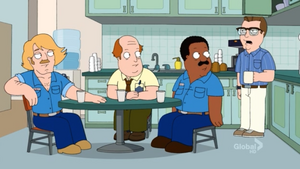 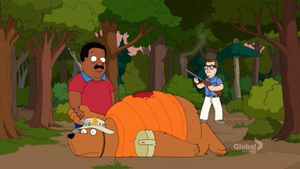 Chad shoots Tim in the back. 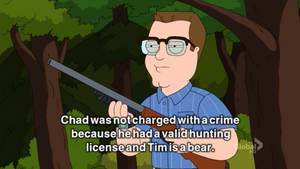