Fighting and beating up people.

Kissing and having sex with his own sister Jamie.
Beating up anybody who hurts his sister.

Carry on his affair with his sister (likely failed after being exposed).

Chad Martin is the brutish, handsome younger brother of Jamie and the secondary antagonist in the 2012 comedy film That's My Boy.

He was portrayed by Milo Ventimiglia, who also played Peter Petrelli in the TV series Heroes.

Chad arrived at the Cape Cod summer house of Tod Peterson's boss, Steve Spirou, who allowed it as the site of the wedding; while he doesn't get along well with Jamie's brother Chad, a Marine he has just met for the first time, he is well-liked by the other guests, but he shown a great deal of disdain towards Tod as he threatens to brutally hurt him if he ever hurts his sister.

Donny arrives at Cape Cod to try to convince Todd to participate. Though Chad himself was suspicious because he had previously told people that his parents had died, Todd introduces Donny as an old friend; Donny elaborates with a heroic backstory and, despite his extremely crude behavior, quickly becomes well-liked by the other guests, at the expense of Todd's popularity – to the point where Todd's best man, co-worker Phil, passes the role of best man on to Donny. Donny tries to convince Todd to come to the women's prison to see Ms. McGarricle (not revealing that it is for Morgan's television show), but Todd fights constantly with Donny about his father's immaturity, both now and during his childhood. When Donny later hears Jamie yelling at Todd, he tries to be fatherly by encouraging him to stand up for himself; he follows this advice the next day at the wedding rehearsal, getting into a fistfight with Father McNally.

Donny joins Todd and his other friends at the bachelor party, which is a relaxing, alcohol-free visit to a spa organized by Phil. Donny proceeds to offend everybody at the spa (although eventually has sex with the uptight proprietor Ms. Ravensdale), before convincing the others to go to the strip club with him, where Todd bonds with Brie, and everybody gets drunk and raucous. Donny sends the other guests home, but Phil stays and gets a blowjob from a stripper with a neck brace, then he and Todd meet up with Vanilla Ice, a former friend of Donny's from his B-grade celebrity days; once Donny apologizes to Ice for sleeping with his mother (the cause of a long-standing rift between the pair), the three wreak havoc through the night before returning to Steve's house, where both Donny and Ice have sex with Steve's mother and a drunk Todd has sex with, then vomits on, the mannequin wearing Jamie's wedding dress. Throughout the night, Donny and Todd bond. Todd tells Donny that he has given him a present for being best man and Todd agrees to visit Ms McGarricle in prison; Donny, knowing that the meeting is a television set-up, tells him not to go.

The following day, Jamie forces Todd to take the dress to the dry cleaner and Todd decides to visit his mother anyway. Donny rushes to prison to stop the meeting, but arrives too late; Randall ambushes Todd, Donny, and Ms. McGarricle with a film crew and an enraged Todd leaves. He refuses to sign a release form for the television appearance, leaving Donny with no money from the stunt.

Donny returns to Steve's home to retrieve his belongings and overhears Jamie on a phone call, indicating that she is cheating on Todd with Steve. He tries to tell Todd at the rehearsal dinner that night, but Jamie comes up with a story to cover her tracks. Defeated, Donny leaves and returns to the strip club, where his friend Kenny convinces him to return and earn Jamie's forgiveness. Donny heads to the hotel where Jamie is staying, only to find her having sex with Chad, her brother, whom Donny learns is actually a jazz dancer pretending to be a Marine. Jamie gives Donny the money he needs in exchange for his silence.

Donny opens Todd's present to find an oven mitt, which Donny had used as a sock puppet to comfort Todd during his childhood. Touched by Todd's acknowledgement of their father-son relationship, Donny realizes that he must stop the wedding, in spite of his need for Jamie's hush money. He and Vanilla Ice interrupt the wedding ceremony and Donny reveals that he is Todd's father. Donny tears up Jamie's check and urges her to whisper the truth to Todd – which an astonished Todd exposes to the entire crowd. In the ensuing fight, Jamie and Chad are both knocked unconscious. Todd accepts Donny as his father and proudly re-assumes the name Han Solo Berger.

It is unknown what happens to him but it is assumed he is arrested and sent to a federal prison after the FBI finds out he impersonated a U.S. Marine to hide the fact that he was a jazz dancer from his father. 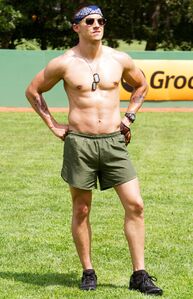 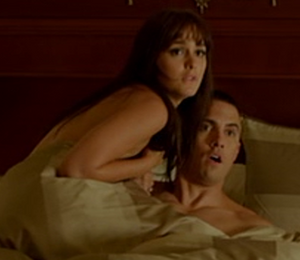 Retrieved from "https://villains.fandom.com/wiki/Chad_Martin?oldid=4326114"
Community content is available under CC-BY-SA unless otherwise noted.