Steve Gardener, better known by his stage name of Chad the Chipmunk, is the official mascot of Atlantic Island Park and a minor antagonist in the 2015 horror game The Park.

Originally infamous throughout Solomon Island as a dropout and a drunk, since donning the Chad the Chipmunk suit, he has since devoted himself to his new role - to the point that even Steve's closest friends become unnerved by the lengths he goes to in order to reinvent himself.

During the events of The Park, he can be seen stalking Lorraine on a near-constant basis, watching her from the shadows and occasionally appearing out of nowhere to startle her. However, though Chad at first appears to be the main antagonist of the game, he is ultimately little more than an extension of the real villain of the story - and the threat he poses to Lorraine is much more psychological than physical.

Though Steve's past is still largely unknown outside of anecdotal evidence, it can be assumed from his surname that he was related to Andy and Dave Gardner - both of whom are well-known for their own psychological issues in the present (the latter having become infamous for drowning the family kittens, the former having been permanently traumatized as a result). Numerous accounts from across Solomon Island suggest that Steve was a scholastic underachiever and frequently ended up at the bottom of the class - to the point that he may have never graduated from high school at all.

As an adult, Steve survived on petty dead-end jobs around Kingsmouth, but ended up blowing most of his money on booze: invariably, he drank to excess, to the point that the sight of him vomiting into the gutter outside the Sycoil Station on Solomon Road quickly became a regular occurrence. His temper caused frequent problems for him, especially while drunk, and he often took to starting fights - though popular graffiti claims that these brawls often ended in him being beaten to within an inch of his life. By the late 1970s, Steve's reputation as the town drunk was secured, and popular opinion held that he was headed for an early grave as a "useless slob."

However, everything changed in 1978 when Atlantic Island Park was officially opened on Solomon Island. The brainchild of millionaire industrialist Nathaniel Winter , it had been built supposedly in order to provide a much-needed boost to the island's economy and bring jobs to the area; as such, it wasn't long before Steve eventually sought out a permanent position at the park in the hope of earning a regular paycheck. To the surprise of everyone, he was ultimately hired as a performer, playing the part of park mascot Chad the Chipmunk.

Doubly surprising was Chad's sudden change in character upon starting work: far from carrying with his usual drunken antics, he adjusted to the role of park mascot with astonishing maturity, remaining a consummate professional throughout his early days as Chad. Indeed, his ice-carving show proved to be a major draw for crowds, with guests flocking to Steve's daily exhibitions of skill in sculpting blocks of ice into amazingly-detailed statues - though friends of Steve were at a loss to explain how he had acquired this new talent.

Unfortunately for all parties concerned, Steve grew more and more enamored with his role as Chad, to the point that he took to bringing his costume home with him and refusing to change out of it at all. Often, he could be seen wandering around town still fully-dressed in his costumed regalia, even on his days off. Many workers began to complain of a horrible smell of rotting meat around the mascot, one that only grew worse as the summer grew hotter. Perhaps most disturbingly of all, he took to stalking fellow employees at the park, often showing up at their workstations unannounced and staring at them for hours on end ("eye-fucking," as Laura Henman put it), refusing to respond to the simplest inquiries, and often leaving without a word of explanation. Eventually, Nathaniel Winter himself supposedly addressed these complaints by discussing the matter at length with Steve, but nothing changed. Indeed, he became so submerged in character and so adamant in his refusal to remove the costume that many people stopped referring to him as Steve - from then on addressing him only as Chad.

Throughout Atlantic Island Park's time in the spotlight, the amusement park was plagued by a series of catastrophic incidents: children inexplicably disappeared in the House of Horrors; the dismembered corpse of a child was discovered behind the cotton candy stand; the entire roller coaster derailed and killing a family of three. With a few well-placed bribes, Nathaniel Winter was able to keep safety inspectors and other officials from having the place shut down, but it was clear to most of Solomon Island's residents that Atlantic Island Park simply wasn't safe. Indeed, guests tended to experience unaccountable feelings of fear and disquiet after staying on the grounds for any length of time, the workers doubly so; Chad seemed the lone exception - and then only because he appeared to be going insane.

Unknown to all but Nathaniel Winter himself, both Chad's ongoing descent into madness and the numerous accidents were due entirely to Atlantic Island Park's true purpose: believing that the dark nexus of energies hidden under Solomon Island would be an ideal means of achieving immortality and ultimate magical power, Winter had built the park in order to tap into the nexus and infuse himself with it; however, in order to power the machines that would harvest this power, he needed the emotional energy of joy and happiness... which was the very reason why his project had been disguised as an amusement park in the first place. Visitors to the park were drained of the joy they'd normally experience on the rides and attractions, and most walked away feeling inexplicably frightened - a small sacrifice as far as Winter was concerned. What Winter hadn't considered was the effect that this siphoning effect might have on the minds of individuals who didn't have much joy to begin with: people who were suffering from depression and other emotional problems responded badly, often developing unhealthy obsessions, wild mood-swings, and outbursts of shockingly irrational behavior.

Chad, as it turned out, was no exception to the pattern: his frustrations over his lowly status in life had been transformed into an obsession with becoming someone else, and his violent alcoholism had degenerated into psychotic rage. Indeed, it's possible that the disappearances and deaths occurring around the park might be entirely due to Chad - assuming they weren't due to a parent or guardian being driven to madness by the park as well.

His descent into madness came to a head one day while ice-carving near the Octotron. By this time, the mascot's sculptures had become increasingly unnerving to onlookers, and audiences were careful to give the increasingly-disturbing employee a wide berth. However, a group of teenagers made the mistake of mocking him as they walked past; Chad responded by flying into a rage and attacking the teenagers in a frenzy, stabbing at least one of them to death with his ice-pick and leaving his victim's eyeball sitting on his half-finished ice sculpture.

Shortly afterwards, Chad was arrested. Declared insane - and likely incompetent to stand trial as well - the freshly-unmasked Steve was committed to a mental hospital.

Back on Solomon Island, Chad's rampage proved to be too much for local authorities to tolerate, and even Nathaniel Winter's fortune couldn't prevent him from being prosecuted: in 1980, Atlantic Island Park was officially shut down, and in the wake of its final closure, Winter mysteriously vanished into the depths of the park, never to be seen again.

Role in The Park

Given that he appears on most of the promotional material for The Park, it's initially believed that Chad the Chipmunk is the main antagonist of the game and the main opposition to Lorraine's attempts to find Callum. However, as the plot continues, it eventually becomes apparent that the story is actually set several years following the park's closure, and the Chad encountered over the course of the game can't actually be the genuine article: instead, this version is essentially an illusory replica of the infamous park mascot, a living hallucination conjured up by the Bogeyman in his attempts to mind-rape Lorraine.

As such, the threat he poses to Lorraine is not physical, but purely psychological: given that the Bogeyman feeds on human fear, Chad exists to help feed the monster's appetite - often startling Lorraine by appearing out of nowhere and vanishing just as quickly. Worse still, the emotion-siphoning machines are still active within the park, and as both Chad and the Bogeyman continue to spook Lorraine, what little happiness she still possesses begins to vanish, leaving the machines to slowly drive her towards insanity in much the same way that Chad himself was back when he was still known as Steve Gardener.

With this in mind, Chad also serves as a sneak-preview of what Lorraine could become if she is completely corrupted by the park: throughout the game, frequent references are made to "The Witch," a monster drawn straight from the tale of Hansel and Gretel supposedly haunting Atlantic Island Park alongside the Bogeyman and all his other minions; however, the climax of the story reveals that the Witch is the role that the park is slowly forcing Lorraine into, with all her deeply-buried frustrations and fixations being drawn to the forefront of her mind as unreasoning hatred and possessive rage - a pawn for the Bogeyman to use and discard just as Steve Gardener was. Just as Steve became Chad, Lorraine could become the Witch.

The game's finale appears to bear this out, for Chad is last seen in the basement of the House of Horrors as Lorraine races to save Callum; he does not interfere, but merely watches from the corner of the room. Fittingly enough, it is in this room that the Bogeyman puts the finishing touches on Lorraine's transformation into the Witch by pressing Chad's icepick into her hand and forcing her to stab Callum to death.

Chad makes one final appearance as part of the tie-in game The Secret World, specifically during the Samhain 2015 mission "The Seven Silences." Here, it's revealed that Lorraine was made effectively immortal by the Council of Venice following the events of The Park, and has spent the last thirty years committing suicide over what happened to Callum, but always coming back to life. As such, the action of the mission kicks off when it's discovered that Lorraine has somehow been able to kill herself - permanently this time.

Having found Lorraine's dream journal, charting attempts to find a means of ending her life for good, the players learn that she eventually discovered that seven powerful dreams were used to progressively disable the source of her immortality ; these dreams could only be accessed in very specific locations across the world, prompting the players to replicate her journey through her suicidal dreams. The journey leads them to Tabula Rasa hotel in London, the Kumiho Hotel in Seoul, the Dream Palace love hotel in Kaidan district Tokyo, and finally back to Solomon Island.

Here, in stage five of the mission, players must sleep in the hellish ruins of the Overlook Motel, whereupon they find themselves in a nightmare of Atlantic Island Park - specifically intended to bring out Coulrophobia in the dreamer. It is here that players must finally do battle with dream versions of the common park inhabitants - most notably, a dream-incarnation of Chad the Chipmunk, who must be defeated if the players hope to retrieve the severed piece of Lorraine's Bee. 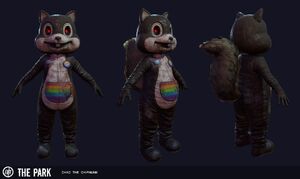 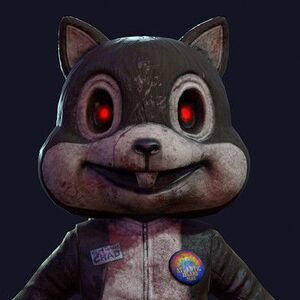 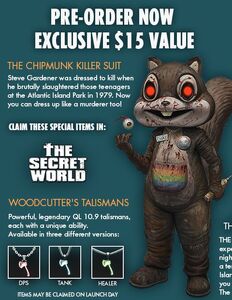 TSW advertisement for the Chad the Chipmunk costume.
Add a photo to this gallery

Retrieved from "https://villains.fandom.com/wiki/Chad_the_Chipmunk?oldid=3464606"
Community content is available under CC-BY-SA unless otherwise noted.