Businessman
Member of the Cult of Gozer

Giving charitable donations to the Cult of Gozer.

To serve the Cult of Gozer.

Ghostly Cultist
The Chairman (real name: Cornelius Wellesly) is a ghost from the Ghostbusters: The Video Game (Realistic Versions), and one of the many villains of the Ghostbusters series. In the Stylized Version, he is replaced by the Tyrannosaurus Rex Skeleton. He was a successful businessman in the 1900s who joined the Cult of Gozer, a secret society obsessed with bringing about the return of their god to the Earth.

Death has not been kind to Chairman Wellesly; he is resurrected as a corpulent shadow of his former self, dressed in tattered indigo-colored cultic, ceremonial robes, and bearing a tattoo of an occult diagram on his body. In the center of this diagram is a single, glowing yellow eye, which proves to the thinnest point in the Chairman's ectoplasmic construction.

The Chairman was formerly Cornelius Wellesly and was the Chairman of International Steel, a board of trustees who ran the Natural History Museum in New York. It is unknown how he died.

During the events of the game, Ivo Shandor and his cult used their power to make connections to most of the city's powerful businessmen, even when they died, Shandor would use his power to revive them as paranormal entities, even the Chairman was considered one of them as he held the most power of his time until his death.

Eventually, the Chairman was assigned to act as a guardian inside the museum when the Ghostbusters investigated of the Cult's intentions. To that end, he engaged into a fight against the Ghostbusters, who eventually managed to defeat him. 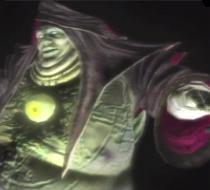 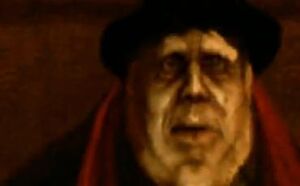 Chairman Wellesly (The Chairman) in life before his death. 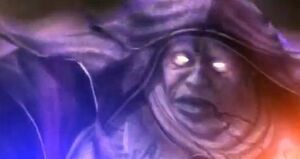 The ghost of Cornelius Wellesly (The Chairman).