Chairman and representative of the Blarg race

Chairman and inheritor of Drek Industries

Having planets harvested of their resources.

Create a perpetual cycle of planet polluting and restoration that will profit him. (both failed)

He is the oppressive CEO of Drek Industries and dictator of the Blarg species. He is also responsible for purposely polluting his home planet Orxon, so that he can profit from building a new planet.

He was voiced by Kevin Michael Richardson, who also played Gantu in Lilo & Stitch franchise, Prince John in House of Mouse, Shredder in TMNT 2012.

Chairman Drek was native to the planet Orxon and was the leader of the Blarg race. In the events of Ratchet & Clank, he and his army were attempting to create a new planet by taking chunks of different planets and adding them to their new world after Drek severely polluted Orxon and the planet's population grew at an unbalanced pace, killing anyone that got in his way of creating their new home. A diminutive robot named Clank was horrified at his intentions and fled the planet Quartu by stealing a Blarg ship, but was shot down by Drek's troops and crash-landed on planet Veldin, where he would meet a Lombax named Ratchet and would team up to find the galactic superhero Captain Qwark and stop Drek. When Drek noticed Ratchet's ship departing Veldin, he ordered a shaded figure (later revealed to be Captain Qwark himself, as Drek secretly hired him to be the spokesman of the new planet) to "take care of them."

Drek posted videos of his intentions of creating the new planet by extracting large chunks of them, thus causing the planets that were damaged to end up hurtling out of orbit and into the sun, killing the planet's populations and destroying the planet itself in the process. Meanwhile, Ratchet and Clank finally found Qwark in Blackwater City on planet Rilgar and he agreed to help them and told the duo to meet him at his HQ on planet Umbris. Qwark has the duo run a death course to "prove themselves to him", and the famous superhero betrayed them, leaving them to fight off the Blargian Snagglebeast, which failed to kill them. This frustrated Drek and he gave Qwark a second chance to kill the two heroes or he would be fired.

Eventually, he had Qwark use a Blarg ship to fight Ratchet and Clank at the Gemlik Moonbase. Ratchet confronted him again, but despite Qwark's efforts, he failed again and was shot down and Drek fired him.

Later, Drek planned to destroy Veldin to finish off his planet, but this was uncovered by Ratchet and Clank who immediately returned to Veldin to confront Drek. The duo eventually found Drek waiting for them in a giant mech and fought them. After confessing he was responsible for the pollution on Orxon, he activated a laser to destroy Veldin, but Ratchet and Clank deactivated it and sent his mech falling onto the surface on his new planet with him still inside it. Ratchet then pointed the laser at the new planet and destroyed it and killed Drek. It is unknown what became of the Blarg upon Drek's demise, but it is likely that they were either wiped out (the laser destroyed their new planet, and it seems likely that their entire population was already on their planet) or severely reduced in population. 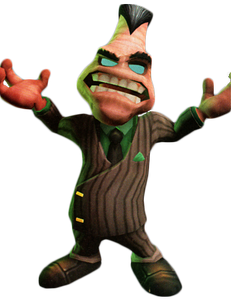 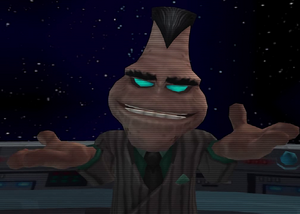 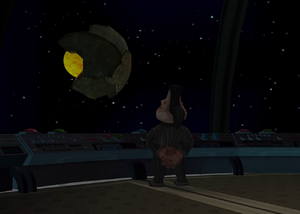 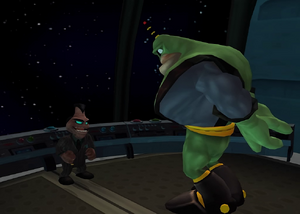 Drek scolding Qwark for failing to eliminate Ratchet and Clank. 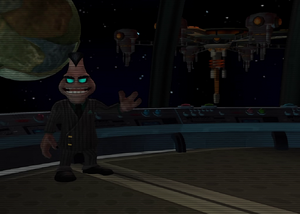 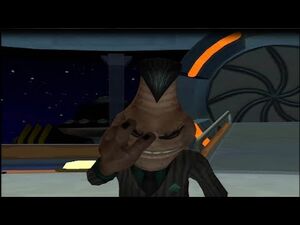