Representative of the Blarg race

Chairman and inheritor of Drek Industries

Having planets harvested of their resources.

Destroy the Galactic Rangers (all failed).
Create a new planet for the Blarg race (temporarily succeeded).

Ultimate Supreme Executive Chairman Drek, or simply known as Chairman Drek, is the central antagonist of PlayStation's second full-length animated feature film Ratchet & Clank and the 2016 PS4 reboot. Similarly to his original counterpart, he is the oppressive CEO of Drek Industries and leader of the Blarg species. However, he wasn't as evil as his original one.

He was voiced by Paul Giamatti​ in the Ratchet & Clank film, and Eric Bauza in the 2016 re-imagined video game.

Chairman Alonzo Drek has a similar story to his original counterpart. It is implied that his father was responsible for causing his home planet, Quartu, to become overpolluted to the point of becoming uninhabitable. As such, Drek sought to build a new home planet for his race, the blarg, to inhabit. He used his weapon, the Deplanetizer, built by Dr. Nefarious, a former Galactic Ranger hired by Drek to design much of Drek's weaponry to be used for his plans. In doing so, he planned to destroy uninhabited planets, and harvest their fragments in order to build his new one. Upon destroying his first target, Planet Tenemule, the Galactic Rangers are alarmed and aim to put a stop to Drek. As Drek moved towards his next target, his lieutenant Victor Von Ion warned him that the Galactic Rangers heavily patrolled a specific part of the Solana Galaxy. Drek was unmoved, insisting that he will destroy the Galactic Rangers to stop them from getting in his way. He ordered Dr. Nefarious to build an army of three hundred warbots, who would be used to destroy the Galactic Rangers. The factory used to build this army malfunctions, creating a defect who would later be known as Clank, and flees before crash landing on Planet Veldin.

When Drek's army invaded Planet Kerwan, the rangers are unsuccessful in fighting against the warbots, until Ratchet and Clank arrives, saving the city from the threat. Drek is furious over the failure, and Nefarious concludes that sheer firepower alone will not be sufficient to win. Instead, Nefarious suggests that they could turn the tide by convincing Qwark to turn against the Rangers due to his ego making him the most corruptible of the team.

Later on, Drek sent his forces to destroy the Starwatch Defense Cannon in order to stop it from disrupting the blarg's harvesters. It was also found that Drek had been using hydroharvesters on Pokitaru to steal their water supply; both plans were foiled by Ratchet. As Qwark led the Galactic Rangers to assault Drek Industries, he made it to Drek's office, where he was ambushed by Victor Von Ion. Drek proceeds to prey on Qwark's insecurity, blaming Ratchet for the loss of his reputation as the greatest superhero in the galaxy. They successfully convince him to betray Ratchet, and Drek promises that the inhabitants of his next target planet will be evacuated safely.

As Drek manages to slip from the grasp of Ratchet and the Galactic Rangers, he flees Quartu and leaves Zed behind to be captured. They learn from Zed that Drek plans to target Planet Novalis next, which would be his sixth planet as well as first populated planet to be destroyed. The Rangers proceeded to assault the Deplanetizer directly, Qwark told the heroes he would "try to reason" and shuts down the communications, leaving them to be attacked. When Qwark meets up with Drek again, he abandons his promise and orders his forces to destroy the Rangers. Ratchet is captured by Drek when found infiltrating the Deplanetizer, and has him witness the destruction of Novalis, although the inhabitants had been evacuated on time, and Victor Von Ion is destroyed during his pursuit of Clank.

Drek, as convinced by Dr. Nefarious, aims to target Planet Umbris next. Nefarious convinced him to target Umbris because the core of said planet is composed of tetragen, which would cause a destructive chain reaction due to an upcoming conjunction between the planets. Drek holds a memorial for Victor Von Ion, before celebrating the finished construction of his planet New Quartu. He is confronted by Qwark later on for turning against his promise to not harm the Rangers. He insists that it was necessary for the greater good, but Qwark warns him that Nefarious is capable of greater evil than he can comprehend, but Drek dismisses this before Nefarious arrives and sends Qwark out of the room. Nefarious betrays Drek and turns him into a sheep, sending him to his new planet. He was killed as the Rangers hijacked the Deplanetizer and targeted New Quartu to destroy it. 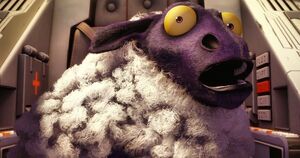 Sheep-Drek about to be shot off into space.

Drek mere seconds before being killed by the Deplanitizer's laser.