King of the Bandits

The Book of Life

Pillage all of Mexico (almost succeeded).

Gain the Medal of Everlasting Life in order to become invincible (succeeded temporarily).
Kill Manolo, Maria, Joaquín and anyone else who opposes him.
Kill anyone who stands in his way (both failed).

Chakal is the main antagonist of the 2014 computer-animated film The Book of Life. He is the wicked bandit king who commanded a fierce army of murderous banditos and plotted to steal a powerful medal known as the Medal of Everlasting Life in order to become invincible.

He was voiced by Dan Navarro, who is also a folk singer in the music duo Lowen and Navarro.

Chakal happens to be a cruel, violent and aggressive individual who enjoys terrorizing Mexico for his own pleasure. He has razor-sharp teeth or razor-sharp fangs, he carries two giant, monster shark-shaped swords, his name alone strikes fear and terror in the hearts and minds of all mortal beings and all mortal living things, an his mere presence and his army of banditos sends everyone and everything running for their very lives and for the hills. He is also shown to be extremely indomitable and fearless, as he refuses to stand down during a battle (even if the odds are against him and his army), even attempting to commit suicide in order to destroy an entire town in revenge for his defeat. In the past, he had a more benevolent side, as he saved a little girl, Chela, during an unknown battle and took care of her, like she was her daughter.

Little is specifically known about Chakal's past, except that Joaquin's father died from fighting him in battle. Chakal had risen to become the tyrannical king of a huge army of bandits after he stole a magic medal from the dark lord Xibalba, but ever since Xibalba stole it back and gave it to Joaquin, Chakal and his forces went on a rampage of getting it back, terrorizing many towns of Mexico, including San Angel.

Even though he lost his medal to Xibalba, he was still nearly impossible to injure. Despite this, he still desired to regain the medal in order to become completely invulnerable again. Therefore, he was ready for a full-scale invasion on the town San Angel, from which Joaquin and his best friend Manolo (the protagonist of the film) were from, when he discovered that Joaquin was the current owner of the medal. With that in mind, Chakal plans to pillage San Angel to get the Medal back.

He launched his bandits on to the town, where they ravage and pillage. Manolo's father Carlos tries to hold them off, only to be quickly killed by Chakal. He then continued his rampage towards San Angel. Joaquin then faced against Chakal to protect the town, but foolishly lost, and Chakal finally regained possession of the medal.

Despite having gotten the Medal back, this was short-lived when Manolo arrived to stop Chakal, making him lose hold of the Medal. It turns out that Manolo has gained the favor of the three gods; La Muerte, The Candle Maker, and even Xibalba. The hero returned to life with an army of his lost relatives, and quickly defeated the bandits. Now it was only Chakal, who faced off against Manolo and Joaquin.

After a long battle, Chakal grabbed both of their love interest, Maria, and climbed up a bell tower in a King Kong-esque final stand, threatening to kill Maria if he doesn't get the medal back. Manolo faces off with him for the last time, knocking him off the tower. He is then positioned under the bell, and is tied up by the heroes. However, in one last stand, Chakal lit a series of bombs all over his body, planning to blow himself up to destroy the entire town in revenge for his defeat, much to everyone's shock. Manolo knocked a column, prying the collapsed bell from its wreckage and trapping both himself and Chakal to shield the imminent explosion to save the town. Joaquin managed to stash the Mystic Medal into Manolo's suit, which enabled Manolo to survive the explosion unscathed while Chakal explodes, thus killing him in the process. The rest of Chakal's bandits flee away in defeat, ending Chakal's reign of terror once and for all. 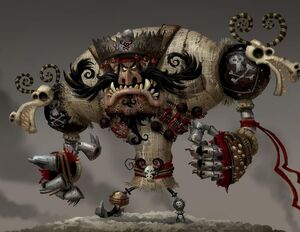 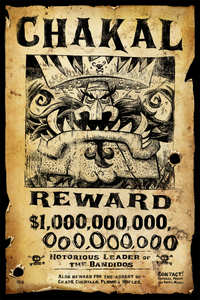 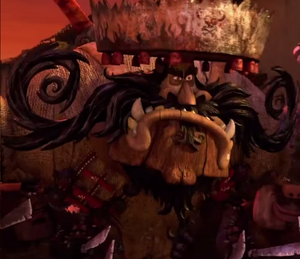 Chakal’s death.
Add a photo to this gallery

Retrieved from "https://villains.fandom.com/wiki/Chakal?oldid=4182304"
Community content is available under CC-BY-SA unless otherwise noted.