Omnipotent
The Creator
God of the Universe

Find an "heir" to watch over the world of Gaea.

Destroy the universe and recreate it.
Kill Asura (all failed).

Chakravartin is the god of the universe and the main antagonist of Asura's Wrath. He is the archenemy of Asura.

Chakravartin portrays himself as the Golden Spider in Asura's Wrath, guiding and helping Asura somewhat throughout the story until the defeat of Gohma Vlitra, preventing Mithra's death by killing Olga, then taking a more humanoid and majestic form with many arms. Revealing he was the one responsible for the events between the Gohma and the Demigods to find an heir to watch over Gaea, since he claimed he became bored of this world and sought to help other worlds in need of his guidance. Asura attacked him, since he was the one responsible for all the suffering the world has seen, Chakravartin easily defeats Asura and Yasha. He claims he will have to destroy the world to make it anew, since Asura was defeated by him, and he was his most likely heir.

He manifests himself in a form far greater in size than that of Gaea, preparing to destroy it. Yasha takes Asura to a safe spot and emplaces the Mantra reactor within Asura so his body could withstand as much anger and power he could produce. As Asura wakes, Yasha proposes a fight between the two to see who was stronger. Asura comes out as the victor, resulting in Yasha's death. Asura meditates under a waterfall to prepare for the battle to come and as Chakravartin launches his cataclysmic power towards Gaea, Asura jumps in the way, absorbing it. Asura gains great power and forms into a being as large as Gaea. Asura launches himself towards him, even though Asura was as big as the planet, he was dwarfed in size compared to Chakravartin. After a flurry of attacks, Asura damages him and they enter an alternate dimension.

Chakravartin returns to his previous form, offering his request once more and the return of Asura's daughter. Asura refuses, attacking him once more. It starts of in Chakravartin's favor, but slowly Asura gains the upper hand. After his defeat, he manifests into his true form, The Creator. His mere touch changed the atmosphere into an all-white plane. Asura, surprised and afraid somewhat, still attacked with all he had. With a mere finger, he blocked his punch and sent him flying back. Once again it is very one-sided but gradually it evens out. Finally, Asura lets out one huge burst of energy, weakening Chakravartin greatly. Chakravartin denies this is happening, and steps back in disbelief. So weak he could not hold Mithra inside him, she is let out from his body. Trying to convince her father not to kill him, as it would result in the end of any mantra-using beings including Asura. Asura replies only with "You will still live." and attacks Chakravartin for the last time, killing him. Asura, slowly fading away, shows his love for Mithra and dies peacefully without his wrath.

Chakravartin is a calm and wise individual, but he is also very cold, ruthless and Machiavellian, because he caused widespread misery for the people of Gaia simply to look for an "heir", with absolutely no care for the suffering of the inhabitants of the planet caused by the Gomora instead of properly taking care and guiding his creations. This is because he became tired of watching Gaia's people and wanted to "save others worlds in need of his guidance". Being the Supreme Being of all the Universe, he developed a God complex. He believed himself above any kind of morality. However, it is unlikely his guidance would be good, considering how deluded he is and what he had done to Gaia. As the Golden Spider, he was annoying at Asura, by playing and preying with his anger, seeing him as his potential successor. His calm and polite demeanor is gradually destroyed as he finds himself unable to either get Asura to become his heir or destroy the demigod, though to the end he sticks to the belief that he is the only god and that everything must bend to his will, which demonstrates a very strong arrogance. That arrogance was his downfall, leading him to severely underestimate Asura's power. Chakravartin is very determined in his goals and his beliefs, not giving up when he fought Asura, even when he was slowly overpowered and still claiming he has all the rights because he is the creator.

At the bottom, Chakravartin is a social darwinist, believing that only the might deserves the right. To that end, he likes to place his designs on "trials" to see if they are truly worthy of living under his reign, usually without paying attention to the collateral damage and suffering his trials involve, showing a great lack of empathy.

As the original source of or the, "Spinner of Mantra", Chakravartin is, in theory, the most powerful being in the Universe.  Through the manipulation of Mantra, Chakravartin is shown to be physically capable of accomplishing virtually any feat imaginable without any sort of effort required.

While Chakravartin is not completely indestructible (as proven during his final battle with Asura,) his resistance to damage alone has shown to be far greater than any other character present in the game, with only the strongest of beings capable of doing any sort of perceivable harm to him (with the only being who has shown this capability being Asura himself.)  Throughout the various forms he manifests in, Chakravartin is shown to boast exponential levels of strength, skill, durability, and endurance, able to easily hold his own against even Destroyer Asura as well as simultaneously dealing critical level damage to the demigod all at once.

In addition to his immense physical power as well as his ability to shapeshift into several powerful and even colossal forms, Chakravartin, as the origin of all Mantra in the universe, has displayed the unique ability to manifest his Mantra in different shapes and forms in sync with whatever form he was currently inhabiting.

In his primary form, Chakravartin's Mantra is golden in appearance and he can manifest it in the form of massive beams as well as multiple massive orbs of energy, and can produce extremely powerful barriers that were able to restrict Asura in his Wrath form from reaching Mithra among other feats. He also possesses extreme levels of durability in this form as he did not sustain any visible damage given by noteworthy injuries from Destructor Asura's punches and was able to overpower both him and Yasha during their fight with relative ease. This form also displays an extreme level of strength, as shown when Chakravartin was able to literally shatter four of Destructor Asura's arms when enraged, albeit with some effort and minor damage to his own limbs.

After sending the Brahmastra crashing down onto Gaea, Chakravartin creates a colossal golden statue version of himself in a lotus meditation position (Golden Chakravartin). Its function is near-identical to that of the Karma Fortress, but its size and the power of its blasts far outclasses that of the Brahmastra. Its blast was capable of destroying multiple planets along its path without losing momentum, and it was capable of using planets and stars as projectiles as a show in the fight against Asura. The inside of the statue is a pocket dimension, referred to as the Event Horizon. In this space, Chakravartin can freely manipulate the reality inside it to create powerful illusions to fool Asura. Even when Asura assumes the form of The Destructor, he still struggles against the Mantra God to maintain an advantage in their fight.

During his final battle with Asura, he assumes a new form. In this form, he is only slightly taller than Asura, his body is much thinner and much more sinister in appearance. This is Chakravartin's most powerful form in all aspects, as he was able to destroy Asura's remaining arms in his Destroyer form with a single finger, reducing the demigod to his most basic form. In this form, his combat style changes radically. Its mantra energy becomes dark grayish in color and he can manipulate the energy in the form of giant throwing knives, energy waves, and colossal energy balls among others. He can also stop time to better focus his attacks on Asura. In this form, Chakravartin's movements become akin to that of an ice skater, moving with grace through the battlefield. He also becomes a fierce hand-to-hand combatant, as he was able to go toe-to-toe with Asura in a brutal, prolonged display of martial arts, showing extreme strength, skill, durability, and endurance.

As the origin and tether of Mantra, Chakravartins' destruction would mean all Mantra and mantra-related creations (such as the demigod race) would inevitably disappear as seen with Asura's death in the end. 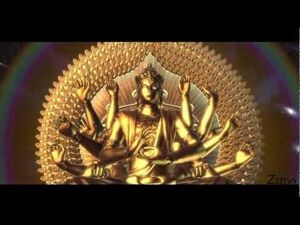 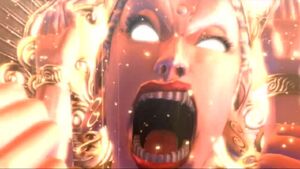 Chakravartin's demise.
Add a photo to this gallery 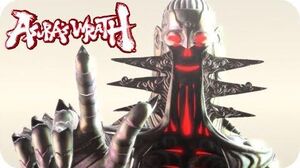 Retrieved from "https://villains.fandom.com/wiki/Chakravartin?oldid=4315793"
Community content is available under CC-BY-SA unless otherwise noted.