Harley Davidson and the Marlboro Man (1991)

President of the Great Trust Bank

Complete control over his men and the Great Trust Bank
Cunning

Sell large quantities of the new designer drug "Crystal Dream" while using his bank as a cover.

Take possession of the "Rock N' Roll Bar and Grill" in order to build a skyscraper in its place.
Kill Harley Davidson and the Marlboro Man after they steal his drugs.

Chance Wilder is the main antagonist in the 1991 cult classic action film Harley Davidson and the Marlboro Man.

Wilder is the president of a bank called the "Great Trust Bank" in Los Angeles in the year 1996. He is also a drug dealer who runs a new designer drug called "Crystal Dream", and he makes millions of dollars from this while using the bank as a cover. However, one of Wilder's drug shipments is stolen by a group of men, led by Harley Davidson and his friend, the "Marlboro Man", and their associates Jimmy Jiles, Jose Cuervo, and Jack Daniels. Harley's intention is to steal $2.5 million in order to save Jiles' father's "Rock N' Roll Bar and Grill" from being lost to The Great Trust, as the bank has plans to build a skyscraper on the site of the bar. Instead, Harley and his associates discover the drugs instead of the money they were originally searching for, and Wilder sends his men to hunt them down and recover the drugs by any means necessary.

Wilder's men continue to relentlessly hunt down the duo, but they eventually manage to kill them before returning to Los Angeles to confront Wilder himself. They arrive in a helicopter and pay the pilot with Wilder's own money to fire upon Wilder's office, and while he's distracted, the Marlboro Man lunges at Wilder and they fight. Wilder loses his balance and ends up teetering on the edge of his office at the top of the skyscraper, clinging onto the Marlboro Man's boot to save himself from falling. At that moment, Harley grabs the Marlboro Man just as his boot tears off in Wilder's hand, sending him plunging countless stories to his death. 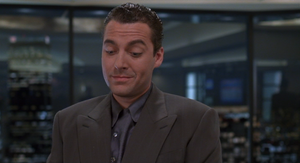 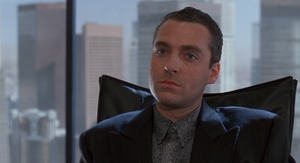 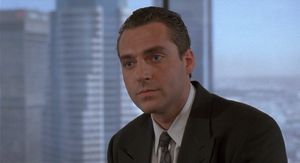 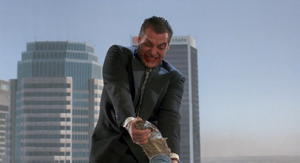 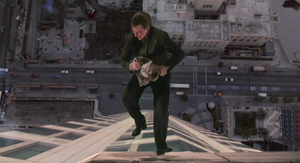 Wilder topples to his death when the Marlboro Man's boot comes off in his hand
Add a photo to this gallery
Retrieved from "https://villains.fandom.com/wiki/Chance_Wilder?oldid=4159898"
Community content is available under CC-BY-SA unless otherwise noted.