Scientist
Chancellor Kiima is a member of Foundation X who was the superior of Lem Kannagi and a minor antagonist in Kamen Rider x Kamen Rider Fourze & OOO: Movie War Mega Max.

When meteors containing SOLU landed on Earth, Chancellor Kiima dispatched Lem Kannagi, along with his two subordinates Katal and Solaris to retrieve the SOLU. After recovering it, Kannagi reported to Kiima about his success.

Kannagi later lost the SOLU in a struggle against the seven legendary Kamen Riders and Kamen Rider Joker, but managed to obtain some more after capturing Nadeshiko Misaki, a being of SOLU who had taken the form of a schoolgirl. However, after arriving at the Exodus, Kannagi revealed his plans to use the SOLU to become a god and ruler of the world before killing Kiima and taking off in the spacecraft. 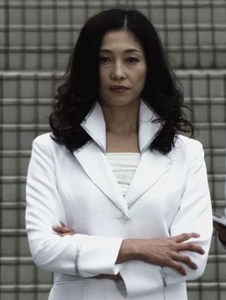 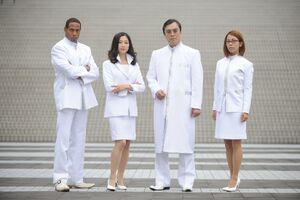 Kiima with Lem Kannagi and his subordinates. 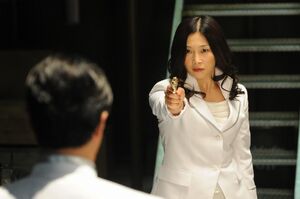 Kiima pulls a gun on Kannagi after he reveals his treachery.