Servant and henchman of Hugo Drax

Henchman
Chang is a major antagonist in the 1979 James Bond film Moonraker. He is an enforcer and henchman of Hugo Drax, the movie's main villain.

He was portrayed by the aikido instructor Toshiro Suga.

After the disappearance of a Moonraker space shuttle, James Bond is sent to California to investigate its owner Hugo Drax. While talking, they are then interrupted by Drax' henchman Chang, who delivers tea. While drinking, Bond asks Drax about the Moonraker. Dufour then returns and Drax tells Bond that she will bring him to Dr. Holly Goodhead, who will show her around. After Bond and Dufour are gone, Drax tells Chang to make sure that some harm comes to Bond.

While showing Bond around, Bond and Goodhead arrive at the centrifuge chamber, in which astronauts are trained to endure the gravity force felt when travelling to space. She invites Bond to have a go and Bond accepts. After being strapping Bond into the chamber, Goodhead is visited by Chang, who tells her that Drax wants to speak her. As Goodhead leaves to phone Drax, Chang enters the control room and activates the centrifuge., quickly accelerating it's G-Force to lethal level. When Bond presses the button signaling that he has enough, Chang ignores it. To save himself, Bond uses his wrist cannon to deactivate the control mechanism, causing the machine to stop. The return of Dr. Goodhead stops Chang from acting further and he leaves the control room, which Bond witnesses.

At night, Chang follows Bond and witnesses him and Corinne Dufour breaking into Drax' office. He tells Drax about this. The next day, Drax is hosting a hunt on the premises surrounding his estate. There, Drax confronts Corinne about the events the night before. Though Corinne denies having part in it, Drax orders Chang to release his hounds. Chang does so and the hounds pursue Corinne into the forest and kill her.

When Bond is in Venice investigating Drax's Museum Of Antique Glass in Venice, he finds out that Drax is manufacturing a highly lethal toxin. While leaving the facility, Bond is ambushed by Chang, who attacks him with a bambus sword. They continue their fight inside the museum, smashing many of the expensive vases and glasses. Eventually, Bond cuts Chang's sword to pieces with a glass sword he picked up. Realizing that Bond is stronger, Chang flees into the upper parts of the building, hiding there and attacking Bond from behind. He attempts to strangle Bond with a chain but Bond escapes, eventually reaching the highest part of the building, the clock tower. There, Bond grabs Chang and throws him through the ornate glass of the clock's dial, causing him to fall to his death into a piano on the plaza below. 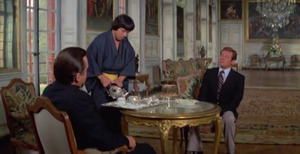 Chang in the centrifuge chamber. 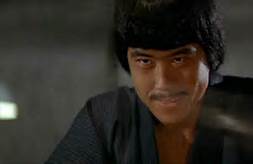