Channing Ngo was a college student and the girlfriend of Kevin Tran on Supernatural, appearing in Season Seven's "Reading is Fundamental." Channing was the villainess in the Season 8 opener, "We Need to Talk About Kevin."

She was played by Lissa Neptuno.

Channing briefly appeared in "Reading is Fundamental" talking to Kevin about the SATs. In her return appearance in "We Need to Talk About Kevin," Sam and Dean ask her about Kevin's whereabouts. Channing turned heel and coldly responded that she and Kevin broke up, claiming that she was only interested in him because he was headed to Princeton, or so she believed. Later in the episode, it is revealed that Channing is possessed by a demon, and she slices her roommate's throat and uses her blood to contact Crowley about Sam, Dean, and Kevin. The trio encounter Crowley and Demon Channing, with Kevin shocked to see her possessed. Crowley actually allows the real Channing to speak to Kevin briefly before putting her back in the demon's control. After the trio escape, the demon exits Channing's body under Crowley's orders, and Crowley later snaps Channing's neck, killing her—while Kevin watched in horror. 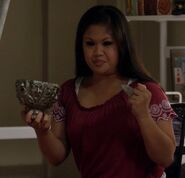 Channing revealed to be possessed by a demon 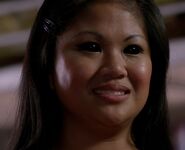 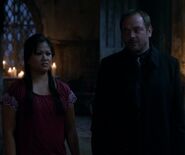