Fighting
Calling upon others' hatred.

Defeat Cosmos and to break free from the cycle of war (Dissidia).

Chaos (in Japanese: カオス, Kaosu) is the main antagonist and final boss of Final Fantasy I for the NES, the first in a series of RPG video games. But as revealed Dissidia: Final Fantasy and Dissidia Duodecim, the Chaos that Garland became is modeled after the original Chaos, the God of Discord who is speculated to lead the series' main antagonists since his re-appearance in Theatrhythm for the 3DS. Many similar beings share his name, like the main villain of Final Fantasy: The Four Heroes of Light, but are presumed to be different entities.

Much of Chaos's history is revealed extensively through Dissidia 012. Chaos was actually a Manikin, an artificial life form made of an organic crystal. He was the first Manikin to be given a sense of self by Cid of the Lufaine, creating a child-like monster imbued with the memories of multiple people. Due to his power, Chaos was taken from Cid to be used a weapon with Cid's wife, whom he saw as a mother, to make Chaos comply. When she escaped, the Lufenians military used Cid's research to turn a Manikin into her a clone of the woman: Cosmos.

By the time Cid and his wife rescued him, Chaos grew twisted and hateful from his time with the military. But when Cid's wife was shot during the escape, Chaos's rage caused him to open portal to the Rift that sent him, Cid, and Cosmos to World B. There, the three meet Garland and Shinryu, whom Cid forges a pact with to have Cosmos and Chaos fight each other in order to eventually open a door to the Rift again, allowing them to return home. But Chaos's memories faded overtime, losing all memory of Cid and his ties to Cosmos.

At the end of the game in the 5th basement of the past-time Chaos Shrine, Garland reveals his plot to the Warriors of Light: Creating a time loop by sending the Four Elemental Fiends two thousand years into the future, to the Warriors' time, for them to use the Four Great Forces to send him back into the past so that he may live eternally. He absorbs the power of the Fiends of Chaos and becomes Chaos, leading to the final battle of the game. Once he is defeated, the time loop is broken and part of time is erased, so that Chaos would never exist.

Like many (if not all) other Final Fantasy final bosses, Chaos masters Firaga, Blizzaga and Thundaga, the highest forms of the Fire, Ice and Lightning spells. Worse, he can cast the Fiends of Chaos' strongest attacks: Blaze, (Fire) Tsunami, (Water) Tornado (Wind) and the one-hit-kill Quake, (Earth) as well as Haste and Slowra to improve his hit rate and decrease the Warriors of Light's own. Even worse, he can cast Curaga to heal himself and use Flare, his most devastating attack.

It is highly advised to protect the party with Ribbons and Protect Rings,as well as favouring physical attacks, as spells do little damage. Do not forget to heal every turn and to cast Haste.

In the Dissidia game series, other than Garland, Chaos employed Emperor Mateus, Cloud of Darkness, Golbez, Exdeath, Kefka Palazzo, Terra Branford, Cloud Strife, Sephiroth, Ultimecia, Kuja, Tidus, and Gabranth. Despite losing Gabranth while Terra, Cloud, and Tidus became warriors of Cosmos, Chaos manages to corrupt Jecht at the suggestion of the Emperor (unaware that the Emperor intended to backstab Chaos with this attempt). During the conflict's final cycle, Chaos destroys Cosmos and begins to regain his memories as his minions are eventually defeated, deciding to destroy reality to cope with the loss of Cosmos. Fighting the warriors of Cosmos in a final battle, Chaos is consumed in the inferno upon his defeat.

Feral Chaos (Desperado Chaos in Japan) is a secret character and superboss featured in Dissidia 012 Final Fantasy. Unlike the more familiar known Chaos, Feral Chaos can be unlocked as a playable character and is among the strongest of characters to appear in the series. Feral Chaos is, as the name implies, a more bestial version of Chaos. He is far larger in comparison with some of his features exaggerated, included a more exaggerated face with distinct red teeth, yellow forearms and legs and a broken left horn. His wings are frayed and his tail features two rows of spikes running down.

At the end of the thirteenth cycle, the Warriors of Cosmos defeat Chaos and end the cycle of war. Shinryu, displeased at Cid of the Lufaine for breaking their pact and siding with Cosmos, silently offers Chaos the chance to get back at Cid, and Chaos agrees. In reality, Chaos dies and the wars end, but Shinryu traps Cid in a nightmarish alternate world where the cycles continue.

In this world, Chaos wins every cycle up until the 18th one; at this point, the power he has gained from the discord and destruction that takes place in each successive cycle overwhelms him, weakening his grip on sanity. He transforms into Feral Chaos, losing any shred of his former self, and goes berserk.

Feral Chaos destroys all the summoned warriors, regardless of alignment, and during the twentieth cycle, he fells the Warrior of Light, the last remaining warrior. Cosmos's power to summon warriors is exhausted, and to protect her Cid seals her and himself in the Chasm in the Rotting Land.

With his nemesis out of his reach, Feral Chaos turns his attention to Shinryu, and Cid cleaves the southern and northern continents in two, restricting them to the north for protection and sealing a gateway on the path connecting the two. The outcome of Feral Chaos's battle with Shinryu, who had also become stronger to transform into Shinryu Verus (True Shinryu), is unknown, but as Feral Chaos has him as a summon, it would seem that either the two came to a truce and joined forces, or Feral Chaos won and absorbed Shinryu's power.

Five warriors appear in the nightmare world, their method of entering unknown to even Cid, though he speculates he may have done so himself subconsciously. In the form of a moogle and having lost his memories after his sealing, Cid is rescued by the party and directs them to the north and to the Land of Discord where Feral Chaos rests at the Edge of Madness, along the way recovering his memories and telling them the story of how Feral Chaos came to be. At the final gateway the party destroys Feral Chaos, shattering the nightmare world and releasing Cid from his torment. As he fades, Feral Chaos comes to his senses, and thanks the warriors for freeing his father. 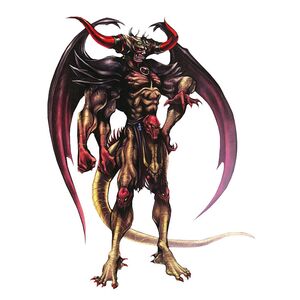 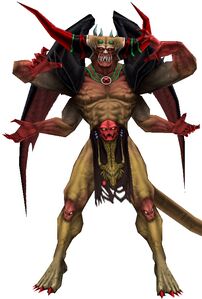 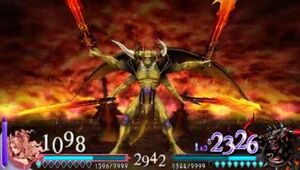 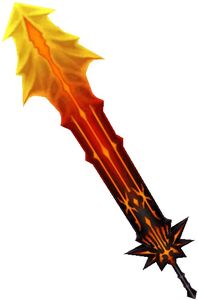 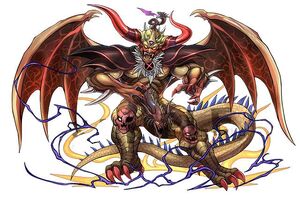 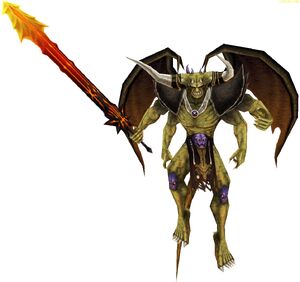 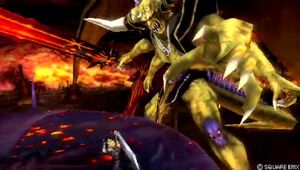 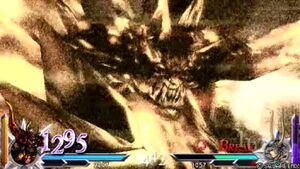 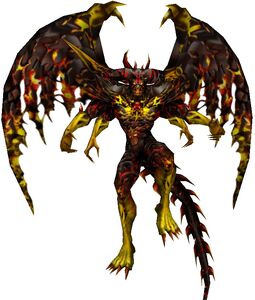 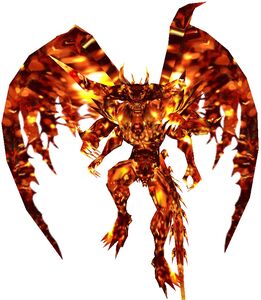 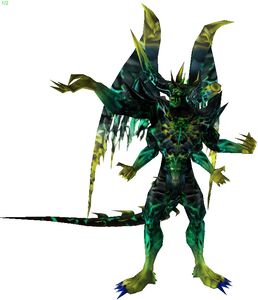 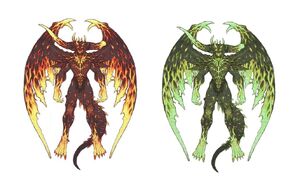 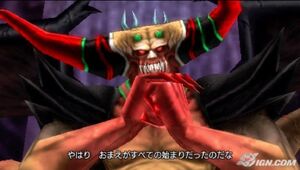 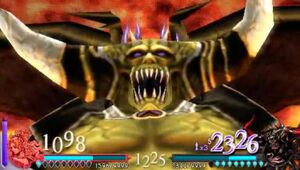 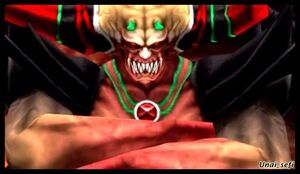 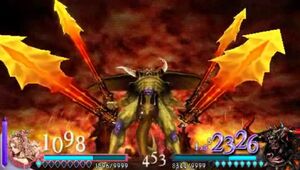 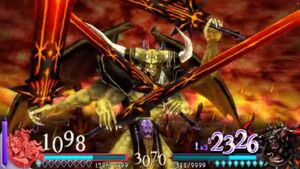 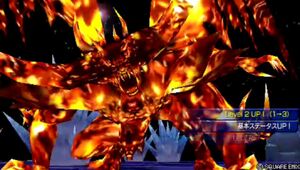 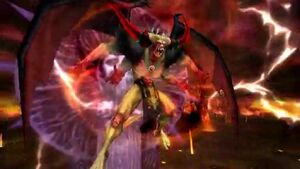 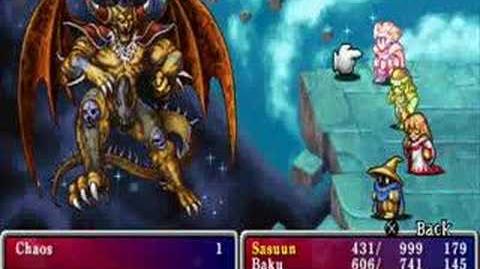 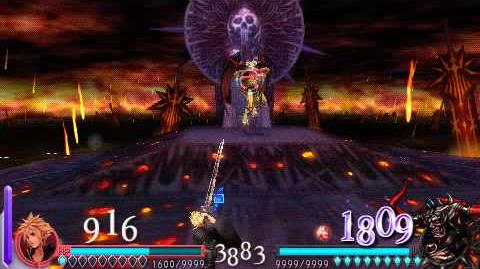