Buddy (by Big the Cat)

Causing others to panic.

Consume all the Chaos Emeralds and destroy Mobius.

Chaos is the main antagonist of the Sonic Adventure arc of Sonic the Comic. He is a Drakon Prosecutor who was mutated by the energy of the Chaos Emeralds into a beast made of water. Unlike in his depiction in the games, he can talk and is far more malicious and evil.

The entity known as Chaos was once a Drakon Prosecutor from ancient times, during the war between the echidnas and the Drakon Empire.

During the events of Sonic the Comic's Chaos Arc, Sonic the Hedgehog was brought back through time by Tikal's magic. At this time, the echidnas were under siege by Drakon forces and a group of echidnas led by a past incarnation of Knuckles the Echidna were attacked by a lone Prosecutor. Sonic intervened and attacked the Prosecutor, seemingly snapping its neck. However, the echidnas did not know until that moment that the Drakons were actually fish piloting robotic bodies.

The Prosecutor was taken to Pochacamac's camp and imprisoned within a water-filled tank. Not long after its imprisonment, a squad of Drakons attacked the camp in order to take back the Chaos Emeralds that the echidnas had stolen from them. During the fight, a discharge from a Prosecutor's battle-staff struck the Chaos Emeralds, causing the Emeralds to 'leak' pure Chaos radiation. The energy mingled with the water in the tank containing the captive Prosecutor, which absorbed the energy and was mutated in a terrifying monstrosity, the creature Sonic would come to know in the future as Chaos. Sonic attempted to stop Chaos then and there, hoping to cancel out the event of Johnny Lightfoot's death at Chaos's hands in the future. However Sonic was unable to defeat Chaos and was almost killed, but Pochacamac used his magic to send him back to his own time. How the echidnas' battle against Chaos played out is unknown, but Chaos was weakened after Sonic was sent back to the future.

At some unknown point in the future - perhaps before or after his rise to power on Mobius - Doctor Robotnik discovered the Chaos creature, which at that point had become mindless and feral since it had not been in contact with the Chaos Emeralds for such a long time. The doctor had attempted to take control of Chaos and failed, and so imprisoned the creature. Exactly how Robotnik was able to keep Chaos contained is not explained, nor is it explained whether or not Robotnik was ever affected by Chaos's fear aura.

Not long after Robotnik's failed attempt to destroy Mobius, Grimer freed Chaos from his confinement in hopes of cheering up Robotnik and motivating him to continue conquering Mobius. Once released, Chaos went on a rampage in the Metropolis Zone, the zone's police force unable to stop him even with advanced energy weapons. Sonic and the Freedom Fighters arrived on the scene and even they found combatting the monster difficult due to the creature's aura of fear. Porker Lewis deduced that the monster was composed of Chaos energy and had brought along a device that could hopefully destroy the beast. The Freedom Fighters attempted to keep Chaos at bay whilst Johnny Lightfoot connected a loose cable. Johnny succeeded, but Chaos killed him with a swift punch.

Although Chaos had been dissipated by Porker's device, it recomposed itself and went in search of Chaos energy to feed on. It transformed into a cloud-like form and took flight toward the Floating Island. After coming into contact with the Chaos Emeralds, Chaos began to regain his mental composure and could think clearly and speak. Driven by violence and destruction, he attempted to absorb the Chaos Emeralds into his body to become stronger and destroy the entire planet. Before he could do that, Knuckles activated a system inside the Emerald Chamber that ejected the Chaos Emeralds from the Floating Island, scattering them across the world. This resulted in the Floating Island losing power and falling out of the sky, crashing into the sea.

With the Chaos Emeralds scattered across Mobius, Chaos began hunting them down one by one. Most of the Emeralds had been attracted by Doctor Robotnik's Chaos Resonator device, which would bring the gems to him and Chaos would surely follow. However, that was the extent of Robotnik's scheme; to bring Chaos, the Emeralds and Sonic and friends together to witness Chaos's ravaging of the planet. Sure enough, Chaos consumed the Chaos Emeralds and transformed into his ultimate form: Perfect Chaos. The spread of his destructive influence was halted by the timely arrival of Super Sonic and Ebony, who had been seeking out a source of Chaos energy so that Super could recharge himself and continue to live. In order to stop Chaos and save his own life, Super Sonic threw himself into Chaos's liquid body and completely drained him of Chaos energy. Without any energy left, the creature turned back into a Drakon fish and was thrown into a lake by Super Sonic.

With Chaos' liquid body absorbed by Super Sonic, Chaos now only existed as a fish. Helpless, he was rescued from crocodile-infested waters by Big the Cat and named "Buddy". Buddy's main goal was to retrieve the power of the Chaos Emeralds to once again become Chaos, but was foiled.

It was revealed that, an unknown point during the Great War, Chaos came into contact with a mysterious robot called a "Gizoid" that had the ability to mimic its opponents perfectly. After meeting Chaos, the Gizoid had the means to transform into a semi-liquid state and, possibly, exhibit the same fear-creating abilities as the original Chaos. Porker discovered this trait by examining paintings inside the Gizoid's temple but was too slow to warn Knuckles.

Chaos here is far more twisted, ruthless, and sadistic than his game counterpart, with no sympathetic backstory. He enjoys killing and ripping people to shreds. He is also narcissistic and egotistical, as he takes great joy in causing fear in the hearts of others.

Being made of energy, Chaos is pretty much indestructible. If dissipated, he can reconstitute himself again. He can change his form from solid to liquid to gas at will, can sense the presence of Chaos energy and can withstand any attack. One of his most impressive abilities is his fear aura. Proximity to Chaos will cause feelings of extreme fear and panic in others, rendering them unable to fight back. 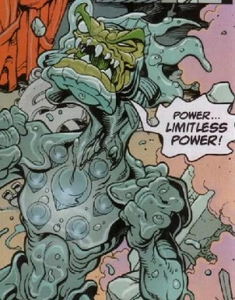 Chaos being formed from the Chaos Emeralds' energy. 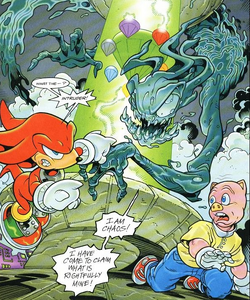 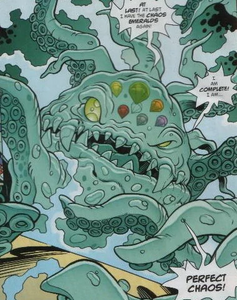 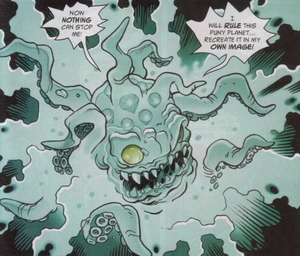 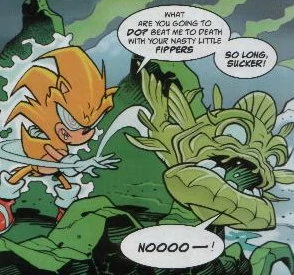 Super Sonic defeating Chaos.
Add a photo to this gallery
Retrieved from "https://villains.fandom.com/wiki/Chaos_(Sonic_the_Comic)?oldid=3796795"
Community content is available under CC-BY-SA unless otherwise noted.