The Chaos Dwarf, also known as the Uzkul-Dhrazh-Zharr, or the Dawi-Zharr, which means Fire Dwarfs, are a villainous faction in the tabletop wargame Warhammer Fantasy Battles. They are a group of evil dwarfs that engage in dark sorcery, slavery and the construction of war machines.

At the height of their empire, before the coming of Chaos, the Dwarfs spread far and wide across the Old World. Ever the diligent workers and miners, they followed the mountains to the north and dug their holds deep into the rock of the earth. Along the way, they reached a place they called Zorn-Uzkul, the Great Skull Land, after all the ancient bones (and especially skulls) scattered there. Though it was rich in minerals, most of them decided that this place was best left alone, but some groups were so stubborn, even compared to their fellow Dwarfs, who are always obsessed with revenge against their enemies, that they decided to live there, to prove that they could.

These most northern dwarven strongholds kept close contact with their kin in the mountains as the Dwarf Empire grew, and the Dwarfs enjoyed an age of prosperity not seen before or since. With the coming of the forces of Chaos, the dominion of the Dwarfs over the Old World started to dwindle. As devastating earthquakes, brought about by the ruthless machinations of the Lizardmen magepriests, shattered the world, the Dwarfs closed themselves up in their mountain holds to weather out the storm, as it has always been their way. There were those amongst the Dwarfs, lead by their fiercest warrior god Grimnir, who argued that Chaos needed to be fought, not endured. And when Chaos was eventually driven back by the actions of the Dwarfs and their High Elf allies, the Dwarfs looked at their wounded domain and thought their northern cousins lost. Surely nothing could have survived the raw Chaos energies unleashed upon the northern wastes. Tragically, they were wrong. The Dwarfs of the Zorn-Uzkul stronghold suffered greatly, and in their anguish they cried out to their western kin for help and their ancestor gods for salvation, but they received no answer.

Though the Dwarfs that chose to live in the cursed wastes were hardy and strong willed, even they were not immune to the corrupting influence of Chaos, and they slowly changed over time. For many long years, they only barely survived, as they abandoned or were abandoned by their own ancestor gods, but eventually they found favor with Hashut, the bull-like Father of Darkness and lesser Chaos God, learning the secrets of daemon-smithing in exchange for blood sacrifices. Soon their bodies showed signs of the growing corruption within their souls: their flesh turned pale, their eyes red and many of the Dawi-Zharr sported horns from their temples while their teeth turned into vicious tusks. Dwarfs have a natural contempt for unchecked magic and tame the raw energy by binding it to their mighty runes. The Dawi-Zharr were relased from these traditionalist shackles and embraced the secrets about working terrible chaotic magic taught to them by their new patron god. Their Daemonsmiths soon learned to combine this arcane knowledge with their own mastery of binding magic and working marvels of engineering into blasphemous amalgams of machine and chaos magic.

The Chaos Dwarfs may have survived the coming of Chaos, but their numbers were greatly diminished. From the Zorn-Uzkul fortress they marched eastwards across the Plain of Zharr, to the Mountains of Mourn and the Sea of Dread in the south. These are the Dark Lands, the lands of fire, smoke and ash, and the Chaos Dwarfs claim them as their nation. They were never a numerous rac though, and the cursed wastes are home to many Orcish, Goblin and and Ogre tribes that they can use as battle slaves. At the heart of the Chaos Dwarven empire they built their great city, Mingol-Zharr-Naggrund, the obsidian City of Fire and Desolation, in the Plain of Zharr. The cursed wastes are dotted with fortress-citadels, garrisons and watchtowers, from where the Chaos Dwarfs venture forth to subjugate all living beings to work for them as an endless stream of slaves. They developed a bitter rivalry with the original Dwarfs for abandoning them.

Chaos Dwarf Sorcerers are afflicted by a curse caused by their use of chaos magic which turns their bodies slowly into stone, starting from their feet. Each Chaos Dwarf Sorcerer will, inevitably, one day slowly transform into an immobile stone statue. Before progressing throughout the rest of their body. Many of them use their sorcerous engineering to construct new mechanical steam driven bodies for a time, but they too eventually succumb to the curse. Their immobile forms now line the road leading to the centre of their mighty empire, the Tower of Zharr-Naggrund, City of Fire and Desolation.

Since Chaos Dwarves aren't that many in number they often use slaves of various races and their Hobgoblin allies in battle. 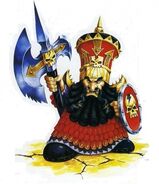 A cabal of Dwarf sorcerers. 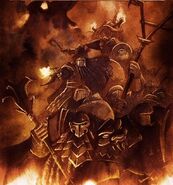 The Modern Chaos Dwarves by Forgeworld. 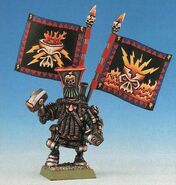 Astragoth Ironhand, ruler of the Chaos Dwarves.
Add a photo to this gallery

Retrieved from "https://villains.fandom.com/wiki/Chaos_Dwarfs?oldid=4095427"
Community content is available under CC-BY-SA unless otherwise noted.