Head of the Chaos Organism

Chaos Header (カオスヘッダー Kaosu Heddā) is the head of the Chaos Organism and the main antagonist of Ultraman Cosmos.

Chaos Header is an artificial being created to bring peace to the galaxy. However, he believes that violence is only the right choice to gain peace and in the end he intends to corrupt all life in the universe to create a new order under him. Before Cosmos came to earth, Chaos Header went on a rampage on an unknown planet that Cosmos was protecting. He changed the planet's ecosystem and made it arid.

The next planet Chaos Header will dominate eventually became Juran. When Chaos Header is on a rampage, Parastan, the unknown protector defeats Chaos Header and forces him to retreat.

Chaos Header first appears as Chaos Organism over city. He is seen by the public. Suddenly, the light shot at the people and destroyed the city. He appeared again and came to Kapuya Island to infected Lidorias. While infecting Lidorias, she went on a rampage and destroyed the city, although Musashi's attempts to calm her down were initially successful, Lidorias' consciousness was taken over by Chaos Header and went on a rampage again when SHARK attempted to kill her. Lidorias destroyed Musashi's plane but Cosmos saved him and finally Musashi merged with Cosmos for the first time and stopped Lidorias by puriffied her, removing the Chaos Organism from Lidorias' body and freeing her.

However, the most terrifying thing was that Chaos Header knew that Cosmos was bonded with Musashi and still intended to infect monsters again.

Chaos Header later became interested in human emotions since the tragedy of Akane and looked for many test subjects, returning them when finished. the last victim was a father, with child and wife at home, heartbroken by disappearing. In his lab where the man communicates via computer and his son's long journey to find his father, there Musashi finds a father being possessed and unable to control his body. However, when his son communicates with him, Chaos Header evacuates his body but in light of his hatred, he turns into a Chaos Header Iblis. When the monster went berserk and destroyed the city, Musashi transformed into Cosmos, but the monster managed to paralyze Cosmos until he finally turned into Corona mode and managed to keep up. On the ground, the father begins to remember his good days with his son and it makes the Chaos Header Iblis weaken and is finally destroyed by Naybuster Ray.

When Chaos Eligal appeared again, Musashi turned into Cosmos and tried to purify the monster with Luna Extract. However, Luna Exctract was absorbed by Chaos Eligal and Eligal turned into Chaos Header Mebut and with a new form, Chaos Header Mebut succeeded in injuring Cosmos so that Cosmos eventually separated from Musashi and weakened drastically. Cosmos parted with Musashi and became transparent like he was the first time he met Musashi.

Chaos Header reappears at the K3 point and goes berserk, the tyrant tries to eliminate the dying Cosmos. Luckily, Lidorias came to save Cosmos but was infected, EYES also came to defeat the tyrant but the tyrant was too strong. At the time of the eclipse, Cosmos rises again and prepares to defeat Chaos Header and Cosmos turns into Eclipse Mode, the tyrant is finally defeated by Cosmium Ray when Lidorias is taken hostage. The beam destroys Chaos Header but purifies Lidorias. Ended the existance of the tyrant for all.

EYES detects Chaos Organisms in the Treasure Base. The ball moved over him and finally caught up with Musashi. When Musashi was forced out, the virus tried to assimilate with Musashi by forcing him to transform into Cosmos. Instead of destroying Cosmos, The virus transformed into the Chaos Ultraman and ovmanage to weakened Ultraman Cosmos, forcing him to return to Musashi and capture him.

When Musashi captured, Chaos Header is able to Strike again when Neldor appeared. Reappearing, Chaos Ultraman turns Neldoran into Chaos Neldorand. And then, Chaos Ultraman flies to Kapuya Island, and tries to infect the inhabitants but fails due to the island strong power field. Chaos Ultraman prepares for an even bigger attack, but the color timer starts to flash. Chaos Ultraman is forced to retreat. After Chaos Header is disappeared and Musashi is freed from the corruption, Musashi transformed into Cosmos to face Chaos Neldorand. Doing so also begs for Chaos Ultraman who attacks again.. Seeing this, Cosmos takes the opportunity to run away as EYES fires their Anti-Chaos Header missile at Neldor and returns it to normal.Turning into Eclipse Mode, Cosmos is able to keep up with his twin. Cosmos manages to kill his dopplenganger using Cosmium Beam, destroying the chaos. However, this is not the end of evil Ultramen.

Sometime after that, Chaos Ultraman will be summoned by Chaos Header again to destroy the SRC lab that studied certain minerals to make the Anti-Chaos Header formula. When Team EYES protecting the lab, Musashi turned into Cosmos and changed to Eclipse mode. He had overpowered his clone until another Chaos Header explosion merged with the Ultra, raising him to become an even gruesome threat and upgrading the clone into Chaos Ultraman Calamity

The clone managed to knock out Ultraman Cosmos' Eclipse Mode. Ultraman Cosmos is helpless and fainted. Chaos Ultraman Calamity attacks him with a powerful attack. After Cosmos is defeated, the darkness clone moved closer to the base of the SRC.

Chaos Ultraman Calamity retreated but attacked another lab where it was researched. Musashi, then, recovered and transformed into Ultraman Cosmos to come. Cosmos turned into Eclipse Mode again. The two of them fight again. When both of the giants fight, EYES have a plan of their own and fires an anti-Chaos weapon at The dark giant's chest, weakening it and giving Cosmos enough time to charge and fire a Cosmium Beam, destroying the clone.

When Chaos Chimera missile was completed, Team EYES and JADF fed Chaos Ultraman Calamity with a wave of Cosmos. But in a turn, Chaos Dolba appears and begins to went berserk, Chaos Ultraman Calamity appears again, summoned by Chaos Header while revealing that the trap EYES has set was predicted. It was attacked by EYES but still waded through all their weapons. Ultraman Cosmos comes to battle once more against his clone, but the monster is ready to break. After Cosmos releases his Golden Light Barrier and his love for the dark, that's a fact, the guard returns. Dolba, after recovering tried his best to hold back the Chaos Ultraman Calamity. Cosmos come in the form of the JADF Soldiers who start aiming their weapons at the existing villains. As Cosmos watched, the famous Monster Hunter fired a Chimera Missile at Chaos Ultraman Calamity color timer. Cosmos rose up and fired a Cosmium Beam.

Another Eligal was turned into a slave of Chaos Header and used to pull Ultraman Cosmos away from EYES. Ultraman Cosmos later fought Eligal, in which Chaos Eligal unleashed all his strength, Cosmos managed to hit the monster with Cosmium Beam, forcing the evil out of its body where the Chaos Header is releashed from the monster body and reveals his motivation.

While on the moon, they fought and in the end Cosmos managed to paralyze the Chaos Ultraman Calamity thanks to the mineral stones on the moon. However, another Chaos Organism appeared and turned Chaos Ultraman into Chaos Darkness. Even with the help of EYES, Cosmos was successfully wounded and separated from Musashi.

In Ultraman Saga, Chaos Header is the guardian of Juran and he is talking to Mienin, who is stand in his arm.

In episode thirty-seven, Chaos Header appears as Chaos Ultraman and divides himself into Chaosroid U, S, and T. After that, Kemur, Black King, and Ragon appear to challenge them. They lost and exploded.

Chaosroid U, T, and S as well as Chaos Ultraman appears in Ultraman Ginga Theater Special: Ultra Monster ☆ Hero Battle Royale! to patronize their good counterparts. Before fighting, Ginga told Ultraman, Ultraseven, and Taro not to give up. They fought and finally collided their beam strength and in the end all Chaosroid and Chaos Ultraman vanished. 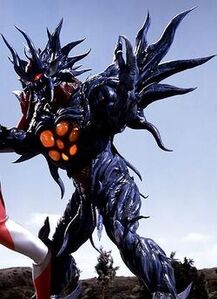 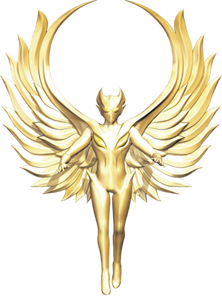