During the events of the Horus Heresy

To bring about the downfall of the Imperium of Man.

See everything in creation enveloped by Chaos.
Various other goals.

Chaos Space Marines (also called Traitor Marines, Chaos Marines, Traitor Legionnaires and Heretic Astartes) is the term used to describe the many heretical Space Marines that betrayed the Emperor of Mankind and became servants of the Chaos Gods. They are part of what might be considered the more villainous race in the Warhammer 40k universe, alongside the Dark Eldar, Orks, Necrons and Tyranids, and part of the Forces of Chaos, which also include demons and lesser humans. Chaos Space Marines come in many forms and tend to have cults of both human and xenos followers. Depending on the philosophy of the legion, they are deeply devoted to certain chaos deities, either one or all of them, but on rare occasions none of them.

Unlike many other factions within Warhammer 40,000, rather than being united under the umbrella of a higher figure or as loosely affiliated groups, they are fractious, fickle, refractory and prone to infighting amongst themselves. They are only truly unified in their will to survive, hatred of the Emperor Of Man and their desire to help Chaos become the ruling power of creation via acts of unspeakable evil. Only when the Warmaster of Chaos (The current being Abaddon) launches a new temporary Black Crusade will the vast majority of chaos warbands unify, for the sole purpose of wreaking as much havoc and destruction upon the galaxy as possible, the Imperium in particular.

They are a playable army choice in Warhammer 40,000 and also serve in a highly antagonistic role in the related media. Chaos Space Marines are the rough equivalent of Warhammer Fantasy's Hordes of Chaos.

Chaos Space Marines draw their origins back to the 31st millennium. Back then, eighteen legions of genetically modified super-soldiers, the Space Marines, fought to unite the galaxy under the banner of the Imperium of Man, in a campaign that history later called the Great Crusade. The Emperor of Man Kind claimed that the intention of this campaign was to unite humanity under one banner, wipe out any xenos that threatened their dominion or survival and establish humanity as the ruling force in the galaxy. In truth, however, the Emperor knew about the existence of the Chaos Gods and the dangers they posed. His secret agenda was to their install the principal of the Imperial Truth - an atheistic doctrine, which would turn humanity away from the elements that served as the Chaos Gods power source thus eradicating them once and for all.

Perhaps fearing the eventual result, Khorne, Nurgle, Slaneesh and Tzeentch, as well as the lesser gods of chaos stopped their own conflicts to interfere with the works of the Emperor of Man. The first step was to scatter his genetically modified children, the Primarchs across the galaxy thus ensuring that the Emperor could not raise or teach them under his own philosophy from an early age. As such each of the Primarchs would face his own trial and tribulations before the Emperor rediscovered them, which in some cases sowed the first seeds of resentment against their father.

Only once the Great Crusade was already underway, would the Chaos Gods seize their chance. Starting with the Emperor's disenfranchised son, the pious Lorgar Aurellian, who became disillusioned with his father following an incident in which the Emperor publicly humiliated both him and his legion, the Chaos Gods seduced Lorgar into Chaos-worship. When the Primarch undertook a pilgrimage, they showed him horrifying visions of the future under the Emperor and convinced him that without the aid of Chaos humanity would share the fate of the Eldar. Having won over a powerful leader and orator into their cause, the Chaos Gods' campaign to subvert the Emperor's faithful soldiers had begun.

After purging his Legion of all elements with any loyalties left to the Emperor, Lorgar sent his First Captain Erebus as an ambassador. Erebus, keeping his Legion's new faith a close secret, began organizing the Warrior Lodges, secretive fraternal orders within the Space Marine Legions that existed outside of the Legion's regimented and ordered structures. Though these were under the guise of providing brotherhood without rank, they were instrumental in fomenting sympathies and paving the way for the coming betrayal.

Erebus proved instrumental for setting the stage to the Horus Heresy after seeding the Warrior Lodges into a full half of the Legions and successfully engineering the fall of Horus into Chaos by stealing a powerful weapon known as the Anathame and giving it to a rebellious planetary governor who injured Horus with it. Desperate to save their leader Horus' troops were tricked into bringing him to the serpent's lodge, a group of supposed mystical healers who unknown to them were secretly chaos worshippers. Using this opportunity the Chaos Gods managed to convince the injured Horus to turn against the Imperium in exchange for healing him and he quickly rose to power as the leader of the Chaos forces.

The resulting conflict stretched across the known galaxy all the way to the throne world of Holy Terra consuming billions upon billions of lives, devastating countless worlds and ultimately leading to the Emperor's permanent interment upon the life support system known as the Golden Throne. In the end though Horus' rebellion cost him his life and his fellow traitor troops were forced to retreat into the realm of the Warp through the dimensional rift known as the Eye of Terror in order to avoid the wrath of the vengeful Imperial forces. Never the less a new deadly enemy had been created, from amongst humanities own ranks.

After the Horus Heresy

For the next 10,000 years, the fractured chaos legions would periodically emerge from the warp to wage war against the Imperium. Their lives unnaturally prolonged and their bodies and minds twisted thanks to otherworldly energies of the Warp and the daemons that live there. In their most recent endeavor, the 13th black Crusade, the new Warmaster of Chaos Abbadon the Despoiler managed to destroy the Imperial Fortress world of Cadia, an event which allowed the energies of the warp to spill into the material world and quite literally split the Imperium and the galaxy at large in half. Imperial forces have since retaliated by launching a counter-crusade to push back the onrushing forces and seize the two remaining space paths to the other side of the galaxy, all while the chaos forces use the opportunity to harass and harry them as well as devastate any worlds in their path.

During the Horus Hersey, nine of the Primarchs and their First-Founding Legions turned against humanity, siding with Horus and the Chaos Gods. In the aftermath of the heresy, most of these legions divided into roaming warbands, with some of them adopting new names and philosophies. In subsequent years, a number of Space Marine chapters followed their former-brethren down the dark path, in exchange for the power and glory promised by the Dark Gods. 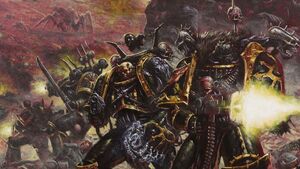 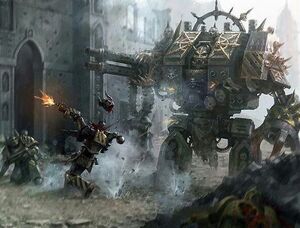 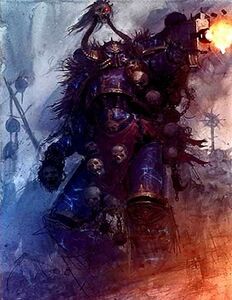 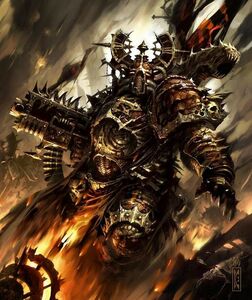 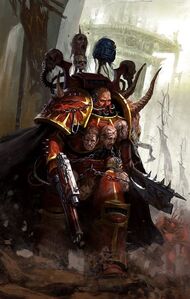 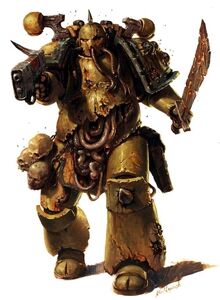 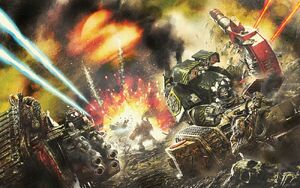 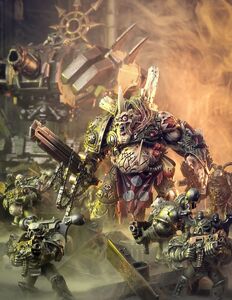 Add a photo to this gallery
Retrieved from "https://villains.fandom.com/wiki/Chaos_Space_Marines?oldid=3450736"
Community content is available under CC-BY-SA unless otherwise noted.