Guarding the Bell of Awakening.

Prevent the Chosen Undead from ringing the Bell of Awakening.

Cure her sister from her pain (both failed).

Chaos Witch Quelaag, simply known as Quelaag, is a supporting antagonist in Dark Souls. She is one of the Daughters of Chaos and the guardian to one of the two Bells of Awakening.

Quelaag was one of the daughters of the Witch of Izalith, one of the lords of Lordran with the power over the Life Soul, one of the Lord Souls that came from the First Flame. As the First Flame started to fade, the witch and her daughters attempted to experiment on the flame to create a duplicate. The ritual backfired and created the Flame of Chaos, causing the witch and two of her daughters to become the Bed of Chaos, spreading a curse across Izalith that turned the residents into demons. Quelaag and one of her sisters escaped their mother's wrath and took refuge in Blighttown, at the cause of their lower bodies being transformed into giant demonic spiders.

Believing that collecting enough humanity would free them from their curse, Quelaag's sister sucked out the blighting pus from the residents of Blighttown to obtain followers to offer their humanity to her but became deathly ill in the process. Quelaag took control of the residents by implanting them with the eggs that her sister laid, infecting others with parasites to serve her and her sister. She then created a large cocoon at the end of Blighttown in front of the belltower with the Bell of Awakening to defeat any undead who tried to ring it; not only to protect her sister, but to gather the humanity from the fallen undead to ease her sister's infections.

When the Chosen Undead is set out into Lordran to ring the Bells of Awakening to open Sen's Fortress, they reach Blighttown and come across Quelaag's domain. Upon entering a large room, Quelaag appears descending down the stairs of the belltower to dispose of the player. For an early game boss, Quelaag is a powerful opponent to take down given her large amount of health and immunity to fire-based attacks. Wearing flame-resistant armor is the best strategy as most of her attacks involve fire, both through her furysword and the spider half's ability to spit out pools of lava. Another strategy is to summon Maneater Mildred, whose summon sign can be found outside Quelaag's chamber after defeating her invading phantom in Blighttown. Let Mildred distract Quelaag and take her out from the side, although she can still attack the player by stomping her legs or by creating a fiery explosion, the latter of which deals massive damage should the player not escape its radius or guard themselves with a shield.

Once Quelaag is defeated, the way to the Bell of Awakening is opened and a passageway to the Demon Ruins. Also, behind an illusionary wall near the entrance to the Demon Ruins is Quelaag's sister, who mistakes the player as Quelaag and offers them to join the w:c:darksouls:Chaos Servant covenant. Reaching the second rank by offering 30 humanity opens a door further up the Demon Ruins, serving as a shortcut to Lost Izalith and skipping the Demon Firesage and Centipede Demon bosses to quickly reach the Bed of Chaos. 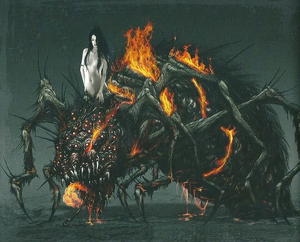 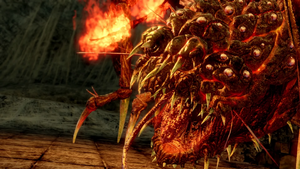 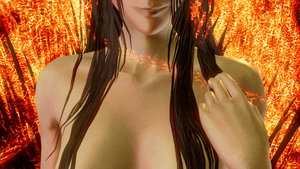 Quelaag grinning when the player enters her domain. 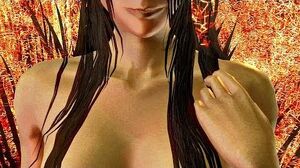 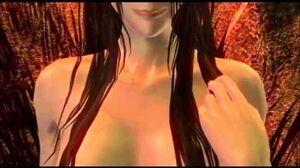