Char is one of the two secondary antagonists (alongside the Ice Emperor) of Season 11: Secrets of the Forbidden Spinjitzu (serving as the secondary antagonist of the Fire Chapter) of LEGO Ninjago: Masters of Spinjitzu. He is Aspheera's loyal servant and a member of the Pyro Vipers.

When Aspheera and Char were young, he became Aspheera's temporarily new servant when Aspheera overthrew Mambo V. And when Aspheera planned to rename Ninjago after her rule, he mistook her name and was angrily corrected by her. Later, the young boys, Wu and Garmadon, came to stop Aspheera's rule. Char watches Wu and Garmadon defeat Aspheera with the Scrolls of Forbidden Spinjitzu. And when Aspheera was defeated, he and the other Pyro Vipers eventually died and their bodies were placed in a sarcophagus. Years later, when the Ninja freed Aspheera from the pyramid in which she had been imprisoned, she freed him and the other Pyro Vipers from the sarcophagus, and with their help began to avenge Wu for his imprisonment inside the pyramid of Aspheera. When Aspheera got her hands on the Scroll of Forbidden Spinjitzu, she used it to find Wu. When he and Aspheera found the monastery of Spinjitzu, they launched an attack there. During the attack, some of the Ninjas went in search of another Scroll of Forbidden Spinjitzu that they intended to use against Aspheera. After finding the scroll, they returned to face Aspheera with her armies, in the battle Zane managed to freeze him, Aspheera and the other Pyro Vipers with the power of the scroll. 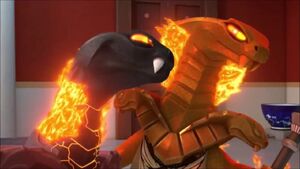 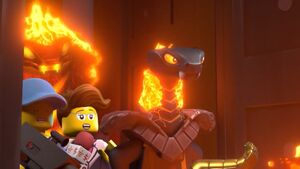 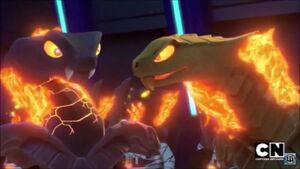 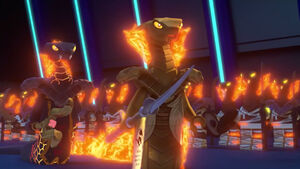 Aspheera and Char attacking the Monastery of Spinjitzu.
Add a photo to this gallery

Retrieved from "https://villains.fandom.com/wiki/Char?oldid=4177687"
Community content is available under CC-BY-SA unless otherwise noted.