Serial killer of the underground

Gather seven human SOULs and break the barrier to free all the monsters (failed).
Get revenge on the human race (failed)
Pacifist/neutral route goals:
Guide Frisk to escape the underground.
Bring about their own salvation.
No Mercy route goals:Gain power.
Destroy humanity and all worlds within the entire universe, including the Surface and Underground.

Chara (last name Dreemurr upon being adopted by Asgore and Toriel) also known as the Fallen Human or First Human, is a posthumous character and the bigger bad/secondary antagonist of the 2015 videogame, Undertale, enabling the protagonist, Frisk, to save the game's main antagonist, and guiding them throughout the Underground. As Frisk is carrying Chara's spirit along, Frisk barely recalls memories of the monsters and the underground through Chara's soul; thus, Chara effectively serves as the narrator throughout every route of the game, helping Frisk and the player whether they choose to show mercy to the enemies encountered throughout it or to slaughter them all and erase the world. Although this is a popular theory among the fandom, this has not fully been proven to be canon.

According to several characters, Chara's personality mirrors the protagonist's, with both being described as a beacon of hope for the monsters trapped underground. Differences between the two include Chara's hatred for humanity and you obviously doing a Pacifist route. Asriel Dreemurr, Chara's best friend, describes Chara as "not really the greatest person". A human soul with the power of either determination or LOVE (Level of Violence) can, in Chara's own words, awaken them from death. Frisk or the player's behavior also influences Chara's, with good deeds bringing about their salvation, while evil deeds magnify Chara's hatred.

Chara, at full LOVE, is one of the few beings in Undertale capable of directly challenging the player's influence over the world.

While the game is unclear about Chara aside from they wanting to kill six humans to break the barrier, them being a former friend of Asriel, they having a similar personality to Frisk, them having an olden hatred of the human race, and they being resurrected by Frisk’s LOVE and destroying the world at the end of the Genocide route, fan theories have been made about them.

For reasons they never disclosed even to their closest friend Asriel, Chara despised humanity, despite being human themself. They climbed a mountain for an "unhappy reason". Coming across the cave that led to the Underground, they tripped on a root and tumbled into the hole where the monsters lived their lives after the war against humans.

A young Boss Monster by the name of Asriel Dreemurr befriended Chara, and his mother and father Toriel and Asgore took Chara in and raised them as a second child and beloved sibling to Asriel. They grow fond of each other, becoming the only ones who can understand each other's dreams and flaws.

A notable event during Chara’s stay with the Dreemurrs was when they attempted to bake a pie with Asriel for their adoptive father, King Asgore. As children are wont to do, they mixed up "buttercups" and "cups of butter" and accidentally poisoned Asgore. Chara laughs the event off, and later Asriel agrees that he should not have worried too much and that he should have laughed the event off just like Chara did.

For a certain plan, Chara later decided to take their own life by poisoning themself with a similar pie. Their plan was to give Asriel their soul, thereby allowing him to pass through the Barrier that trapped monsters underground and take six human souls from the surface. These could then be used to destroy the Barrier and free his people.

Upon reaching the village where Chara had grown up, the humans attacked Asriel on the assumption that he killed Chara. Chara urges Asriel to kill the humans, but Asriel's pacifist philosophy made him decide to SPARE them all. He returned to the Underground to die before his parents, in the Royal Garden. Greatly angered, Asgore decides to carry out Chara's plan, and should he complete it, wage war against the humans.

Asriel’s remains and memories were placed into one of the golden flowers that grew around his dead body by Alphys’ experiments. The flower was imbued with determination, and Asriel to be reborn as Flowey. Chara's SOUL and consciousness seemed to have been resurrected as a spirit that gives Frisk and the player the powers of both Determination and LOVE when they fell on to their grave.

In the No Mercy Route, the player corrupts Frisk (and in turn denies Chara's salvation) and causes them to become violent, similar to Flowey. Chara's morality, which was already wroth and furious, becomes even more vengeful and psychopathic. As they kill more and more monsters, Chara begins to assume control wherever possible to speed the game up, much like a typical RPG player grinding. Under the player's guidance, they watch Frisk kill every monster in the game, including Toriel, Papyrus, and Undyne, all of whom try to convince the player to stop. Chara's speech also becomes increasingly first person, referring to their drawing of a flower as "My drawing", unlike in the True Pacifist route, where they refer to it as "A drawing of a flower".

Upon arrival at Asgore's palace, Sans confronts Frisk, surprisingly and efficiently proving to be possibly the most battle-ground character in the game. Despite having the weakest of powers - his HP, ATK and DEF stats being a mere one - he dodges the player's hits, which makes the entire battle a struggle to land a single, fatal blow. Furthermore, Sans’ attacks are continuous and are enhanced by some sort of venom. The last hit is delivered by the player after Sans falls asleep, which misses, before Frisk takes control and manages to strike Sans by surprise. He then reminds the player that he warned them of the consequences before “heading off to Grillby's” and seemingly dying and dissolving off-screen. The player then proceeds to attack Asgore even when he kindly spoke to them. Asgore is then killed by a desperate Flowey, who was enthusiastic about the player's choice to destroy the Underground's entire population, but also knows he is going to be killed as well. Flowey claims that he had never betrayed Chara, that his betrayals at the start of the game and when he warned Asgore of Chara's arrival were mere pranks, and begs them to not kill him as he modifies his face to mimic Asriel.

Frisk completely slashes Flowey out of existence and Chara reveals themself to Frisk claiming that all the power stats represent themself. They ask the player to join them in destroying the world. At this point, the player can back out only by closing the game, but choosing either option results in Chara destroying the world and closing the game itself in the process.

If the player reopens the game, they will only encounter a void in the remnants of the Underground. After ten minutes, Chara offers them to return the world in exchange for their soul. To fully restore the world, the player has to accept; otherwise, Chara will leave until the player restarts the game and waits ten more minutes.

If the world is restored and the player completes a True Pacifist Route, its ending is modified to that of a horror game. If Frisk chooses to stay with Toriel, Frisk wakes up with Chara's features and emits a slower version of Flowey's signature laugh. If Frisk claims to have places to go, Chara replaces Frisk in the picture in the end and crosses everyone else's faces out.

If the player completes the No Mercy Route a second time, Chara will speak to the player again. Chara describes them as "wracked with a perverted sentimentality", stating that they could not understand doing a second No Mercy Route. They will then make the same offer to destroy the world as they did before, with the same results of the player's choice in both routes.

At any time, should the player fail to meet an area's requirements to continue the No Mercy Route (save Sans, who kills Frisk if they accept his offer when he pretends to spare them), Chara and Frisk have the option to continue without grinding for more EXP and attain one of the neutral endings.

Throughout these routes, just as in No Mercy, Chara provides flavor text for Frisk and the player. However, these routes show a very different side to their personality. Gone are the blunt and harsh fragmented sentences of the No Mercy route. Chara shows themself to be very sarcastic and contimelious, make puns and jokes, and become so overcome with emotion during the fights against their parents that they fall completely silent. They clearly have a large vocabulary for someone so young and enjoy describing the world around them. While somewhat abrasive and suspicious of Frisk at first, they slowly grow more fond of them.

During the True Pacifist final boss fight against Asriel, it is implied that Frisk SAVEs Chara and redeems them of their past wrongdoings and misanthropy against humans. Through Chara’s memories of Asriel his rampage is finally stopped, and he uses the power of all of the souls he has absorbed to break the Barrier and free monsterkind.

Of note is the fact that Flowey, later transformed into Asriel when he regains his original body at the end of the True Pacifist Route, mistakes Frisk for Chara even when they are on the True Pacifist route. When he realizes his mistake, the player learns that the name Chara - or any name they chose at the creation of their save file - isn't the protagonist's, but the first human's. This realization doesn't occur in the Neutral or No Mercy Routes, as Asriel isn’t properly SAVED and still holds on to the memory of his sibling. 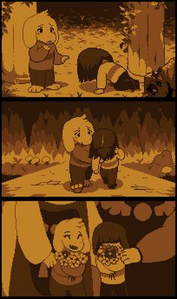 Chara shows off their more ghastly and demonic appearance. 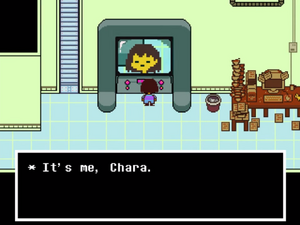 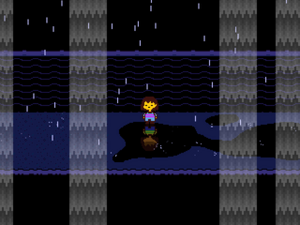 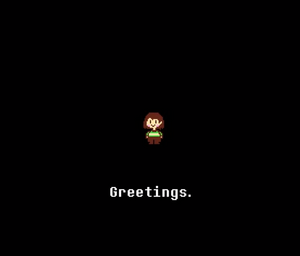 Chara greets the player after returning from death. 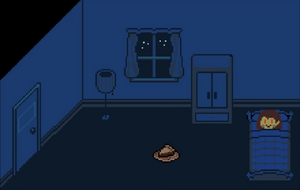 Chara possessing Frisk and seemingly killing everyone else.

Retrieved from "https://villains.fandom.com/wiki/Chara?oldid=2464103"
Community content is available under CC-BY-SA unless otherwise noted.