Turning animal agents into cyborgs.
Hanging out with her husband.

To free her husband from prison (succeeded).

Just like her original counterpart, she was voiced by Allison Janney, who previously voiced Ms. Grunion in Peabody and Sherman and Gladys Sharp in Over the Hedge.

As opposed to her original counterpart (who is civil and unaware that Doof is an evil scientist), 2nd Charlene is proven to be extremely devious, conniving and intelligent as her husband, as she was able to concoct a brilliant plan to free him from prison with the help from her army of Animal-Borgs. She is also very manipulative, as she was able to trick the Resistance into bringing her husband to her penthouse as part of her plan. She is also willing to eliminate anything that serves as an obstacle to herself or her plans, as she almost tried to kill the Resistance members with a bazooka, though they evaded the shot.

Despite her sinister personality, 2nd Charlene has some positive traits as she genuinely loves and cares for 2nd Doof and their daughter 2nd Vanessa, even helping out with 2nd Doof in forming a fake divorce to secure their family's safety and finances in case their reign was overthrown.

In the TV film, 2nd Charlene is presumed to be divorced with 2nd Doofenshmirtz (who is ruling the Tri-State Area with an iron fist and his army of Norm Bots). She doesn't appear in the film, but is mentioned twice in the scene "Vanessa Meets Doof", when 2nd Vanessa confronts her father for banishing another boy named Tony Marzulo for showing an interest in her. As 2nd Vanessa leaves for 2nd Charlene's penthouse by taking 2nd Doofenshmirtz's blimp to get there, 2nd Doofenshmirtz tells 2nd Vanessa to tell 2nd Charlene that she had fun though. This scene was cut from the film, though it was later shown in the movie's DVD through the bonus features.

Back to the 2nd DimensionEdit

2nd Charlene makes her sole appearance in the episode sequel, where she narrates the events of the film. 2 months following 2nd Doofenshmirtz's arrest and the Norm Bots' destruction, it has been reported that 25 of O.W.C.A.'s agents have gone missing during the early days of the Doofenshmirtz family's reign, and that they have now captured the reformed Platyborg following an attack on Danville Park by two giant robot ants. Several of the agents include 2nd Isabella's pet chihuahua 2nd Dimension Pinky (known as Chihuahuaborg) and 2nd Dimension Peter the Panda (known as Pandaborg). 2nd Dimension Candace Flynn (the leader of the Resistance) has been informed about the missing O.W.C.A. agents, so she paid a visit to 2nd Doofenshmirtz in jail, where he confessed that 2nd Charlene was the one responsible for kidnapping them and turning into cyborgs, similar to how he turned 2nd Perry into Platyborg. 2nd Candace then decides to track 2nd Charlene down and bring her to justice for her crimes, even forcing 2nd Doofenshmirtz to help her by threatening to take his toy train away while he can still remain in prison.

Upon arriving at 2nd Charlene's penthouse with 2nd Phineas, Platyborg, and a restrained 2nd Doofenshmirtz, 2nd Candace soon learns that 2nd Charlene is still married to 2nd Doofenshmirtz and that they filed a fake divorce to secure finances (such as tax records, coupon mail, junk yard sales, and separate vacation trips) and safety for their family in case their reign was overthrown. It is also revealed that the divorce ruse, along with the park attack and Platyborg's kidnapping, were nothing but diversions to trick Candace into freeing 2nd Doofenshmirtz by getting him back to her penthouse in case he would be overthrown, since only Doofenshmirtz relatives were allowed to enter by passing through the sensor system of the penthouse.

Also, in a more darker tone, 2nd Charlene had managed to capture 2nd Ferb and turned him into a cyborg, allowing her to capture 2nd Candace, 2nd Phineas, and Platyborg in her lair and freeing 2nd Doofenshmirtz. 2nd Charlene is annoyed of having her husband of setting his attention on his silly childhood toy train so she throws it away, resulting 2nd Doofenshmirtz to go back to his evil ways. She also intends to turn both 2nd Candace and 2nd Phineas into cyborgs just like she did with 2nd Ferb. However, it later turns out that 2nd Ferb had pretended to be a cyborg so that he can help the Resistance infiltrate into 2nd Charlene's penthouse with a frontal attack, allowing himself to free his siblings and Platyborg from their cell.

At the moment, the Resistance arrive to free all of the animal agents with specialized fedora hats (equipped with magnetic deprogramming chips) while 2nd Candace engages into a bo staff fight with 2nd Charlene. After all of the agents are freed from their evil programming (except for Pandaborg), 2nd Candace manages to defeat 2nd Charlene by having one of the freed agents to cut her manicure to distract her. 2nd Candace is about to take both 2nd Doofenshmirtz and 2nd Charlene into custody by having the animal agents to hold them at gunpoint. However, the arriving 2nd Vanessa tricks 2nd Candace into having a moment with her evil parents, which allowed the Doofenshmirtz family and Pandaborg to escape in a hover car driven by Tony, much to 2nd Candace's anger. As the notorious Doofenshmirtz family escape, 2nd Doofenshmirtz recognizes Tony as the boy he banished earlier because of his interest towards 2nd Vanessa, to which 2nd Charlene confirmed, stating that nobody saw it. It's completely unknown if 2nd Charlene and her family were ever taken into custody or lived the rest of their days as fugitives.

Though 2nd Charlene isn't technically a super-villain like her husband, she turns out to be an impressive shooter and a bo fighter, as she was able to hold up against 2nd Candace (who is also a bo fighter herself) in combat, proving to be a super-villain in her own right.

It also seems that 2nd Charlene is able to understand and inherit some of 2nd Doof's skills in robotics, as she was the one who created the giant mechanical ants and turned several of O.W.C.A.'s animal agents into Animal-Borgs with the same technology 2nd Doof used to create his Norm Bots and turn his nemesis 2nd Perry into Platyborg. 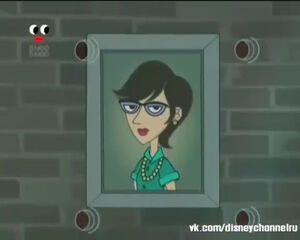 A picture of 2nd Charlene in 2nd Doof's cell. 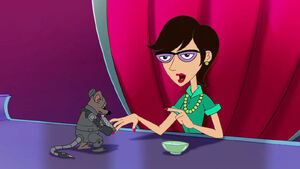 2nd Charlene doing her manicure while talking to 2nd Vanessa. 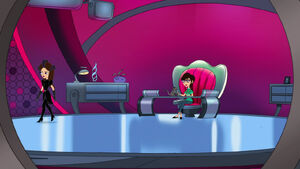 2nd Charlene continuing her manicure as she awaits for the Resistance's arrival. 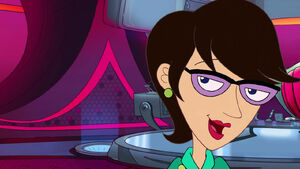 2nd Charlene about to explain the real reasons why she and 2nd Doof pretended to be divorced. 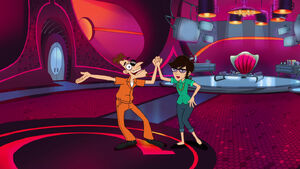 2nd Doofenshmirtz and 2nd Charlene singing "All the Convoluted Reasons We Pretend to be Divorced". 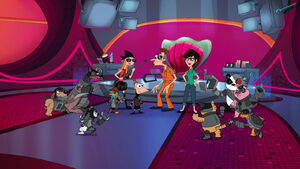 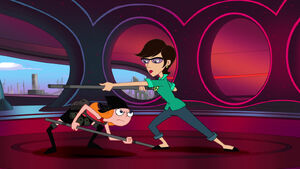 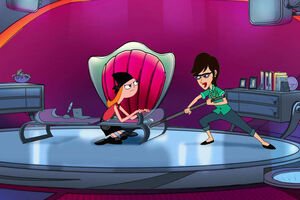 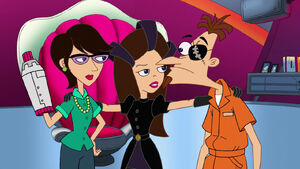 2nd Charlene and her family. 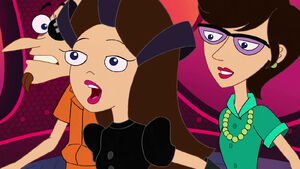 2nd Doof and 2nd Charlene being surprised as 2nd Vanessa tells them to run. 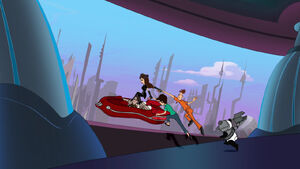 2nd Charlene and her family (along with Pandaborg) escaping on a hover car. 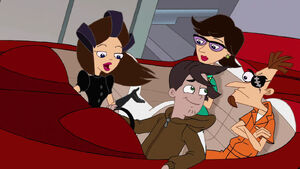 2nd Doof and 2nd Charlene meeting 2nd Vanessa's boyfriend Tony Marzulo as they escape.
Add a photo to this gallery

Retrieved from "https://villains.fandom.com/wiki/Charlene_Doofenshmirtz_(2nd_Dimension)?oldid=3757137"
Community content is available under CC-BY-SA unless otherwise noted.