Owner of Green Lake (after his father's death)

Charles "Trout" Walker is the posthumous overarching antagonist of the 1998 novel Holes and its 2003 film adaptation. He was the owner of Camp Green Lake and obsessed with finding the treasure of Kissin' Kate Barlow, and the grandfather of Louise Walker.

In the film adaptation, he was portrayed by the late Scott Plank, whose memory the film was dedicated to.

Trout Walker, whose father owned the town's lake, tried to win the love of Katherine Barlow, the beautiful school matron, but she fell in love with Sam, a black townsman with Charles discovering the relationship. Infuriated at being rejected by Katherine, and jealous over how Katherine had accepted Sam instead of him, Charles immediately used the prejudice of the townsfolk and laws forbidding the relationship between Sam and Katherine to have Sam killed, while burning down Kate's school. Trout led the charge behind an angry town mob and personally killed both Sam and his beloved donkey, Mary Lou. The unjust murder of her lover turned Katherine into Kissin' Kate Barlow, a notorious outlaw. After he murdered Sam and Mary Lou, the town's lake dried up and the Walker family lost all their money.

Years later, Trout and his wife Linda tracked down Kissin' Kate Barlow and demanded to know where she buried her treasure at gunpoint. Rather than tell Trout, Kate instead commits suicide by letting a yellow-spotted lizard bite her so that Trout and his family could waste their years searching.

Angered by this, Trout and his family (even his grandchildren) have spent their lives digging for the treasure, and he passed on his obsession with his granddaughter Warden Walker. After his death, she built Camp Green Lake for delinquent boys, to speed up the process. However, Stanley Yelnats IV found the treasure, causing Trout to die in vain. Kate Barlow got the last laugh, and the Walkers were finally brought to justice (as if by divine providence, it began to rain at Camp Green Lake almost immediately after the warden was arrested). 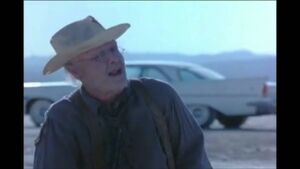