Manipulation
Ability to store vast amounts of information in his head

Get leverage on Mycroft and control him.

Charles Augustus Magnussen (or CAM) is the main antagonist of series 3 of the BBC crime-thriller series Sherlock.

He is a media mogul who owns the majority of Western civilization through very careful application of blackmail. He is shown to be even more intelligent than Sherlock, and frequently puts people in mortal danger for his own amusement.

He was portrayed by Lars Mikkelsen, who also voiced Admiral Thrawn in Star Wars Rebels.

Charles Augustus Magnussen is the owner of a newspaper company and a known blackmailer, who has the most powerful people in Western Europe under his control. His dodgy ways found himself being investigated and being called up for a parliamentary meeting.

After Sherlock Holmes returned after being presumed dead for two years, Magnussen found himself drawn to the detective and wanted to test his "pressure points". He had Sherlock's friend Dr. John Watson kidnapped and placed in a bonfire, in order to see how willing Holmes was to save him. Sherlock 'rescued' John Watson (who actually wasn't in any danger as Magnussen had men standing by), thus proving to Magnussen how important John was to him. Magnussen watched a video of the rescue. A few months after the incident, Magnussen sent a telegram to the wedding of Mary and John, wishing them the 'best' of luck and wishing her that her family could have been there. He signed it with his initials "CAM". The telegram caused great discomfort to Mary.

A few months passed, and Magnussen found himself being questioned during the parliamentary meeting and about his relationship with the Prime Minister of Great Britain. He began taking interest in the MPs and seems to have the ability to "read" their "pressure points", later meeting one of them and blackmailing her with information about her husband's past relationship with an underage girl. This caused her to turn to Sherlock Holmes for help. Magnussen later turns up to Sherlock's home at Baker Street and begins "reading" him and John Watson. After rudely interrupting Sherlock through the encounter and urinating in the fireplace, Magnussen left with his men.

Later on, Magnussen was cornered in his penthouse by Mary, who was previously a CIA agent before becoming a murderous assassin. Sherlock interfered (he arrived at the penthouse to steal back information Magnussen had on the MP) but was shot in the process. Magnussen was spared and arrived at his record room, looking up information on Mary Watson and her murky past. Sherlock decides to make a deal on getting information from Magnussen, a place he calls Appledore, vaults under his home. Sherlock decided to get information from his brother Mycroft to give to Magnussen. Sherlock and John meet Magnussen at his home with a laptop that has private information on Mycroft and other things to do with the government, as well as a GPS locator to guide the secret services to Magnussen's blackmail archives. Aware prior of the trap, Magnussen revealed it couldn't work as there were no vaults; he kept the information he gathered in his 'mind palace' and was able to remember everything, storing away his hard copies elsewhere to be sent for if needed.

Whilst waiting for Mycroft and SWAT teams to arrive, Magnussen, feeling victorious, begins flicking John's face, threatening to tear him and Mary's world apart with the information he has on her if he doesn't let him. When MI6 arrive, Sherlock shot Magnussen in the head, when coming to the conclusion that it was the only way to free everyone he had under his power.

Although Sherlock was initially going to be sent on a dangerous mission abroad as punishment for his murder of Magnussen, Sherlock was later pardoned when he was brought back to the United Kingdom when Jim Moriarty had apparently returned after being dead. The government covered up Magnussen's death by editing footage to make it look like he was taken out by a sniper working for the SWAT team, rather than being executed by Sherlock. 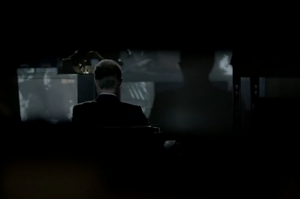 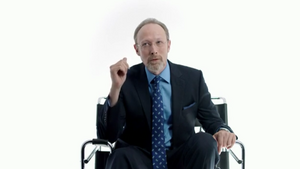 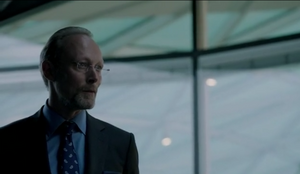 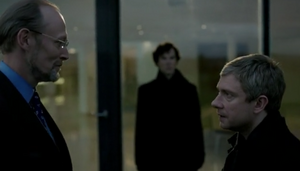 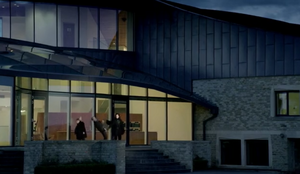