Milverton is first noticed by Sherlock Holmes when he is hired by a client to find blackmail letters from Milverton. Sherlock offers 2,000 pounds but Milverton insists on 6,000 pounds. Sherlock eventually finds where Milverton hides his letters and later breaks into his study. While Sherlock and Watson are in his study Milverton walks in to confront a client. Milverton's client is actually a former victim of Milverton who blames him for her husband's death. In a fit of rage the victim shoots Milverton, killing him. Sherlock and Watson the burn all his papers and leave. When Lestrade asks Sherlock for help he refuses as he sympathizes with Milverton's victims.

Milverton known as Charles Augustuss Magnussen instead is the main antagonist of season 3 of Sherlock.  He is portrayed by Lars Mikkelson.

Milverton is the Granada series 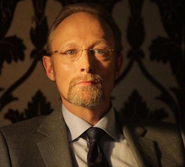 Milverton (known as Magnussen) in Sherlock
Add a photo to this gallery
Retrieved from "https://villains.fandom.com/wiki/Charles_Augustus_Milverton?oldid=3617180"
Community content is available under CC-BY-SA unless otherwise noted.