He was voiced by Alain Goulem, who also played Willis Huntley in the Far Cry series, and one of the Twins in Outlast.

In his early years Sivert was a military soldier operating in the West Indies and the French Colonies. At some point of his life he joined the Templar Order and started an artifact-smuggling operation in the colonies. Through this he funded the colonial Grand-Master Haytham Kenway's operations. He later returned to Paris and served as an councilor of François De La Serre, the Grand-Master of the Parisian Templars along with his fellow Templars Chrétien Lafrenière, Marie Levesque and Louis-Michel Le Peletier.

Feeling unappreciated by De La Serre, he joined the exiled Templar Francois-Thomas Germain and his extremist faction of Templars alongside Le Peletier and Levesque. Sivert was also responsible for recruiting Le Roi des Thunes and Aloys La Touche, the two leading figures of the Cour des Miracles, or the "Kingdom of Beggars". Roi des Thunes and La Touche were both rejected by De La Serre when they attempted to join the order, and Sivert took the opportunity to recruit them to Germain's templars.

Sivert attended the initiation of De La Serre's daughter, Élise in the Palace of Versailles. Sivert called De La Serre to the gardens to talk to him about an urgent matter. When De La Serre arrived, Sivert attacked him but was wounded in the head by De La Serre. However, Le Roi des Thunes arrived and stabbed De La Serre's neck with a poisoned pin. Sivert and le Roi then escaped, with Sivert framing De La Serre's adoptive son Arno Dorian.

After his underling Arpinon was killed, Sivert was stalked by Arno who had escaped prison and joined the Assassin Order. Arno tailed him to the Notre-Dame Church, where Sivert was supposed to meet with fellow templar Duchesneau. While Duchesneau was giving orders to his thugs outside the church, Sivert walked inside the church giving instructions to his guards. Arno then assassinated Duchesneau without being seen and entered a confession booth, where Duchesneau and Sivert were supposed to meet. Posing as Duchesneau, Arno received Sivert's info about his smuggling operation. After Sivert told all that he knew and prepared to leave, Arno broke the confessional window and stabbed Sivert in the neck. Through Sivert's memories, Arno learnt of the Roi de Thunes's involvement in De La Serre's murder. 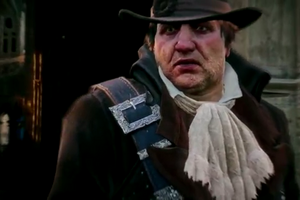 Retrieved from "https://villains.fandom.com/wiki/Charles_Gabriel_Sivert?oldid=4234597"
Community content is available under CC-BY-SA unless otherwise noted.