Torment and kill people he views as filthy and worthless.

He is portrayed by Tahmus Rounds.

Little is known of Charles's background, what is known is that he was born in Missouri and his father owned a meat-packing facility. After his father's death, Charles became obsessed with cleaning the streets of Kansas City of bums and prostitutes. Now owning it, he turned his father's facility into a death maze for his future victims. He bullied and intimidated his friend, Steven Foster, into helping him by abducting victims in the disguise of a social worker. Now with everything he needed, Charles put his plan into motion and claimed over 63 victims. Because his victims were vagrants, nobody, not even the police noticed their disappearance, and Charles was able to continue his murders without any trouble.

In 2007, the obsessive compulsive detective Cal McGee, whom is tasked with keeping an eye on the vagrants of Kansas City, receives a reward for the decrease of crime. Immediately afterwards, Charles writes an anonymous letter to Cal, claiming that he shouldn't be the one getting the credit. Along with the letter and him noticing the alarming amount of missing people, Cal decides to go against his boss's orders and contact the FBI's Behavioral Analysis Unit about the issue. In the cold open, Charles tortures and dismembers an old homeless man named Nate.

At first the BAU aren't able to get the Kansas City police chief to grant jurisdiction to them, but Agent Jennifer Jareau notices that the letter sent from Charles, is from Kansas City, Missouri, officially making it a federal case. The BAU begin profiling the unsub as a house-cleaner, an arrogant type of serial killer that believes they're cleaning up the streets by killing bums, prostitutes, vagrants, basically anyone they view as dirty or a waste of space.

Meanwhile, a prostitute named Maggie is abducted and taken to the facility. Upon waking up, she notices her shoes are missing and proceeds to walk to a big metal door. She tries to pull it open, but it's locked with a chain lock, and it bounces back and bashes her in the nose. Maggie, annoyed, backs up and runs towards the door pushing it open, but also falling in a room filled with broken glass on the floor.

Maggie uses her jacket to sweep away some of the glass and continues over into a white room, where Charles finally begins talking to her from a control room. He explains to her that she has two hours to make it out of the facility or she will be killed.

Despite several obstacles Maggie manages to reach the end of the maze. However, before she can escape Charles closes the door and renders her unconscious using gas. Charles straps her down and prepares to vivisect her, but is interrupted by the arrival of the BAU, who discovered his identity after apprehending Steven. Charles lifts his knife to them but is shot down by agents Derek Morgan, Aaron Hotchner and Emily Prentiss. As he dies, Maggie mockingly tells him that "I won". 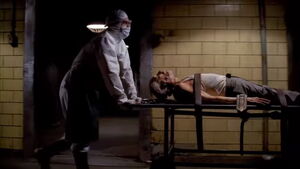 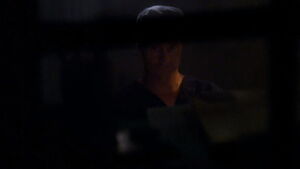 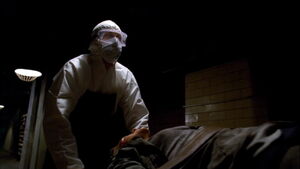 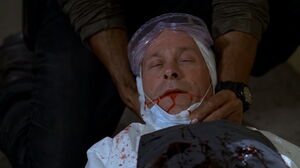