Charles McCulloch is one of the two secondary antagonists of the 1989 slasher film Friday the 13th Part VIII: Jason Takes Manhattan. He is the abusive uncle of Rennie Wickham.

He was portrayed by Peter Mark Richman.

He was cold and harsh to everyone except Rennie and Sean when his father was killed by Jason and Collen and Julius and Sean again whey they got off the S.S. Lazarus and arrived at Manhattan.

After he, Toby, Sean, Rennie, Collen, and Julius are attacked by 2 gangbangers, scares away Toby, and takes Rennie, they split up to search for help and he finds an Irish cop when they all get back together except Toby because he was still somewhere else trying to find them and Julius because he was killed by Jason, they get in the cop's car who agrees to help them, they see Julius' severed head and get attacked by Jason, they were able to escape, but Collen dies when the police car crashed and catches up to Charles, who was shocked to see him and realizes that the cowardly and delusional deck hand was telling the truth and was trying to warn everybody.

He tries to escape Jason but fails, Jason catches up to him, throws him out of window Charles went into, picks him up, then drowns Charles in a barrel of sewage, killing him. 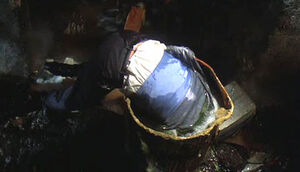