Protect the interests of HHM (abandoned).

One of two co-founders of the prestigious Albuquerque law firm Hamlin, Hamlin & McGill, Chuck was a well renowned lawyer before taking an indefinite leave of absence when he claimed to experience symptoms of electromagnetic hypersensitivity, causing him to become semi-reclusive in his own home. He is the older brother and archenemy of Jimmy McGill, whom he deeply resents for his history as a con man. Despite his reverence for the law, Chuck is far from above committing hateful and immoral acts in the name of keeping his younger brother away from a law profession, inadvertently serving as a catalyst for Jimmy's moral deterioration and transformation into Saul Goodman.

He was portrayed by Michael McKean, who also played Emperor Zing in American Dad!, Sarousch in The Hunchback of Notre Dame II, Horace in 101 Dalmatians: The Series, and Elias Grace in Law & Order.

In stark contrast to his amoral, smooth-talking brother, Chuck is self-serious and scrupulously honest. His loquacious manner of speaking lends itself well to the courtroom, but is mocked as pretentious by some of Chuck’s rivals. In addition to resenting his brother for his wanton rule-breaking, Chuck also envies Jimmy for his ability to charm people and make them laugh. This envy stems from Jimmy being the “favorite child” of both his parents, even though he frequently stole from them. When their mother got sick, Chuck waited on her hand and foot, while Jimmy never visited; nevertheless, her last words were calling out for the absent Jimmy while ignoring Chuck, who was right at her side.

Chuck is prideful and arrogant, particularly when it comes to matters such as morality and the law. He regards the law as sacred, at one point refusing an offer to achieve his goal of forcing Jimmy out of the legal profession because doing so would require him to commit extortion. Despite no risk of being caught, Chuck takes offense at the offer.

He was the co-founder and named partner of Hamlin, Hamlin and McGill (HMM) and elder brother of James Morgan "Jimmy" McGill. When Jimmy is arrested for drunkenly defecating on a rival's car, Chuck reluctantly bails him out of jail and gets him a job in the HMM mail room. He is horrified to discover that Jimmy managed to pass the Bar exam and become a lawyer. Instead of getting over it, Chuck decides to do use his connections to undermine Jimmy's burgeoning law career in any way he can. He believes that Jimmy with a law degree is dangerous and an insult to the legal profession, and rationalizes his conniving and betrayal as serving the greater good. Chuck later hatches a scheme to have his brother disbarred. Jimmy, who for all his flaws is a loving and supportive brother, is completely unaware of Chuck's deception.

Chuck comes to believe that he suffers from a condition known as electromagnetic hypersensitivity (EHS) which causes him extreme pain in the presence of batteries or electrical currents, though this disorder was later proven to be psychosomatic. Nevertheless, he refuses to leave his house, which he keeps completely dark, and shamelessly allows Jimmy to run errands for him, bringing him food and supplies.

Chuck eventually tries to disbar Jimmy after gaining evidence that he tampered with the Mesa Verde documents, nearly getting him arrested but changing his mind. But after being tricked by Jimmy and Kim into proving that his EHS is purely psychosomatic, Chuck goes on an unhinged rant detailing Jimmy's past crimes, thus "proving" to the jury that Chuck engineered the tape to take advantage of his brother.

Chuck's increasingly erratic behavior results in his forced retirement from HHM. Chuck attempts to sue HHM to regain his position, but his former partner Howard Hamlin calls his bluff and pays Chuck off instead. In a fit of misery and rage at the loss of his legal career, Chuck suffers a mental breakdown.

Now with nobody and a empty cold house, Chuck's mental state went unknown to Howard and Jimmy (who last visited him during the beginning of his breakdown). Chuck's EHS symptoms arose one day, and he tears apart his house. Later on in the night, Chuck scatters his legal papers, furniture, books and newspapers, along with the wallpaper from his house and other debris, all along the floor of his home. Each leading into a different room in a 'snake like' pattern. Chuck then sits at his desk, defeated and ruined, and kicks over a gas lantern he has resting on his tabletop. The lantern falls, catches fire and burns the house down with Chuck inside, killing him via incineration and smoke inhalation and causing his house to collapse down on top of him.

The next day, Jimmy, Kim and Howard arrive at Chuck's house to be greeted by the police and a coroner, carrying Chuck's remains away in a body bag. Jimmy looks upon the ruined house, full of guilt, but later relief knowing the man who ruined his life was finally dead. 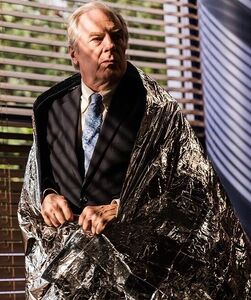 Charles wrapped within his "space blanket", comforting him from his alleged illness.