Discussing about the political system with his henchmen.

Eliminate the Archbishop of Ethiopia (succeeded).

Incriminate Bob Lee Swagger to be a traitor of Ethiopia and later on kill him and his girl Sarah Fenn.
Kill anyone else who gets in his way.
Take over the entire system in order to gain access to the oil departure and gain money through it (all failed).

Senator Charles F. Meachum is the main antagonist of the 2007 movie Shooter. He is the corrupt senator of Montana as well as the head of a consortium of American corporate oil interests.

He was portrayed by the late Ned Beatty, who also played Otis in Superman: The Movie and Superman II, Lots-O' Huggin' Bear in Toy Story 3 and Tortoise John in Rango.

Shortly before the events of the movie, Meachum ordered forces of the US military to kill an entire village in Eritrea because a pipeline was about to be build on the location and the townspeople did not want to move. It was a secret operation led by Colonel Johnson, and the US government was not informed.

When the Archbishop of Ethiopia is killed during the President's speech in Philadelphia, it appears that the assassin named Mikhaylo Sczerbiak had missed the president and accidentally killed the Archbishop. But it soon transpired that the Archbishop was actually the real target, as he wanted to tell the president about the genocide committed on Meachum's order in Eritrea three years ago.

During the raid on Sczerbiak, Swagger is told that Senator Meachum is the puppetter behind Johnson's actions. He thereafter learns that the duo are conspirators for a conglomerate that ruthlessly wipes out any person who stands in their way, as in Eritrea. After Johnson's soldiers fail to kill Swagger, he meets with Meachum to report his failure. When Meachum is told, he states that he is beginning to think that Johnson was the wrong man for the job. During their conversation, Meachum states that there's always someone thinking different and that Swagger has to be eliminated at all costs.

Soon enough, Swagger contacts Johnson to reveal that he has recorded his conversation with Sczerbiak and his proof of both Meachum's perpetuation of the Eritrea incident as well as Johnson's involvement in it. Because Johnson has kidnapped Sarah, they arrange a meeting on a mountain peak. Meachum arrives after Johnson, on board a helicopter. He shows Johnson that he is obviously not happy to be there, this meaning that Swagger found out about his involvement. When a man supposed to be Swagger arrives from a distance, he gets shot by a sniper hidden in the snow. Meachum and Johnson are both relieved, believing Swagger to be dead; but are then proven wrong when Johnson's sniper gets shot himself. The supposed Swagger rises again and is revealed as Nick Memphis, an FBI agent and ally of Swagger who wore a bullet proof west. Swagger then comes out of the Snow and joins the men. Memphis searches the two men and takes their weapons and throws them into the snow. Sarah picks up Meachum's gun and shoots Johnson's henchmen, who raped her previously. Meachum then walks to Swagger and tells him that with his unique skills, he could work for him. When Swagger is clearly appalled, Meachum states that the work is done anyways, it could as well be Swagger who would get paid for it. Swagger then takes out the recording about Eritrea and burns it, as as long as the recording exists, people would die for it and Swagger would not be safe. He states that now he is only a man who lives in the hills with to many guns and gets on his knees as FBI helicopters arrive on the scene. Meachum, clearly satisfied, then walks to his helicopter and leaves the scene.

During Swagger's hearing before the Department of Justice, it is noted that Senator Meachum was not able to attend. Despite Swagger's innocence being proven, both Meachum and Johnson walk out scot-free since their crimes are outside of American jurisdiction; Swagger is left unhappy with the result.

In the night of Swagger's release, Meachum and Johnson celebrate their apparent victory in a secluded hunting lodge - guarded by armed mercenaries - along with Meachum's personal assistant Louis Dobbler. As such, Meachum drunkenly imitates the attorney as he continues to arrogantly boast himself in front of everyone. After finishing his drink, he tells Johnson about their next venture in Ecuador where the latter will once again kill locals who interfere with Meachum's plans; Johnson says that the problem is solvable, just as Meachum states that Johnson is requested to do this for him. Just then, one of the guards gets sniped and he falls dead on the table. Johnson jumps up and deduces that Swagger is here, but Swagger kills Johnson by shooting him behind the throat. As Johnson instantly dies of his injuries, Meachum drops on the floor and orders Dobbler to turn off the lights. He thereupon tells Dobbler to get his car in preparation for his escape, but Swagger blows it up at the same moment. Shortly afterwards, Meachum orders Dobbler to do something; his words prove futile and he could watch in fear as Swagger shoots Dobbler, kills the remaining guarded mercenary, breaks into the lodge, and executes Dobbler as the latter insists that Meachum is solely at fault for his involvement.

With his patience worn out following the deaths of Johnson and all their conspirators, Meachum fearfully tells Swagger to hold for a moment. Meachum gets back in his chair and angrily asks Swagger if he has lost his mind, reminding him that he is still a senator of the United States. Though Swagger agrees with him on this, he shoots Meachum in the face nonetheless - killing him for good. Swagger then creates a gas leak and, with the chimney burning, blows up the entire house; henceforth Meachum's corpse, along with that of Johnson and Dobbler as well as their guards, gets burned as well. 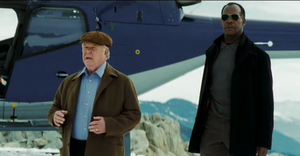 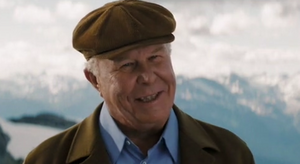 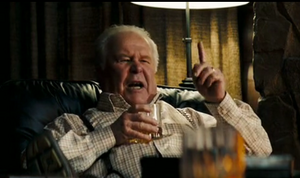 Meachum and Johnson celebrating their victory.

Meachum cowering on the floor as Swagger kills Johnson and the rest of his men.

Meachum's demise as Swagger executes him.