The Rane of Terror

Take over the airplane Flight 163 in order to escape from police custody (succeeded).

Escape from USA.
Keep terrorizing the entire world and to kill John Cutter (all failed).

Charles Rane is the main antagonist in the 1992 action thriller film Passenger 57. He is John Cutter's archenemy and a powerful, deceptive, traitorous, and ruthless terrorist leader whose career has been dubbed as The Rane of Terror.

He was portrayed by English actor Bruce Payne, who also played Damodar in Dungeons & Dragons.

A British aristocrat, Rane's father constantly abused him and his sister during their childhood. He would later kill in a fit of blind vengeful rage. Later in his adult life, Rane became notorious for many high-profile crimes, which extended to acts of terrorism such as bombings in England and Northern Ireland and some airliner bombings and hijackings. This series of incidents caused the media to dub Rane's crimes as 'The Rane of Terror'.

In a Miami hospital, Rane is about to undergo plastic surgery to alter his features so as to evade law enforcement. However, unknown to him and the people inside the building, FBI and local law enforcement have already gathered outside and infiltrated the hospital. Rane then later kills the surgeon and injures several medical workers in his escape but is caught by FBI agents. Authorities later execute their plan to extradite Rane to Los Angeles for trial.

He is put on board an Atlantic International Flight 163 but he manages to get free and take control of the aircraft with the help of his fellow terrorists (who are already on) under disguises of flight attendants and passengers. However, he is thwarted in his attempts to use the passengers as hostages by veteran secret service agent John Cutter, the passenger sat in seat 57.

At one point, Rane releases half the passengers on the plane in exchange for fuel, but while they are leaving Rane takes the opportunity to escape unnoticed. However, Cutter suspects this and chases Rane to a fairground, eventually tackling Rane to the ground and leaving him to be arrested for the second time. Rane informs Cutter that if he is not released, the other terrorists still on the plane will kill the rest of the hostages.

Cutter and his people arrange for Rane to be allowed back on the plane but to have a sniper shoot him just as he's boarding. Unfortunately, one of Rane's men kills the sniper and takes his place, allowing Rane to get back on the plane unharmed. Cutter catches up to it and just manages to get inside before it takes flight.

Inside the plane, Cutter quickly beats the last few terrorists before fighting Rane himself. One of the windows gets shattered which causes depressurization in the cabin, destroying the door in the process. After an intense battle, Cutter manages to kick Rane out of the open doorway where he plummets to his death.

Charles Rane is a textbook sociopath. The sociopathy likely started due to the abuse he and his sister suffered from their father. After killing his father, Rane never hesitated to kill people. He had no remorse for his actions and he mastered his skills in the art of deception. 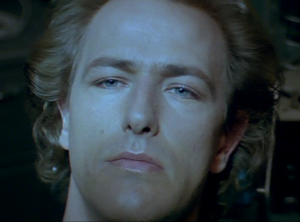 Rane attempting to have plastic surgery. 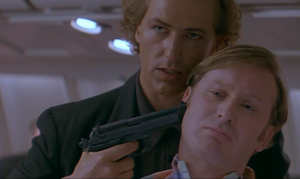 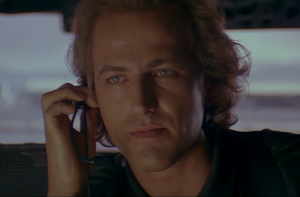 Rane falsely telling ATC that Cutter is an accomplice.

Rane falling to his death.