Aiding and serving the Zec.

Frame James Barr in the incident (both succeeded).
Kill Jack Reacher to end his investigation (failed).

Charlie is the central antagonist of the 2012 film Jack Reacher. He is the right-hand man for The Zec, his own deputy of his gang's direction and an assassin who's responsible for murdering five people.

He was portrayed by Jai Courtney who also portrays Captain Boomerang.

Charlie first appears in a parking lot, gunning down five people using a sniper rifle. James Barr is taken the blame for it, but he later writes a sign saying "GET JACK REACHER". Charlie then appears in a dark alley along with a mysterious shadowy elderly man known as the Zec and is revealed to be the actual shooter of the crime scene. He kills Lindsky for failure and does something with his body later on.

The next scene he appears in, he meets Sandy, one of the people Reacher talked with, outside her apartment building, then Vlad, one of Charlie's men, punches her out and Charlie suffocates her. As Reacher finds Sandy's corpse, Reacher finds the police and a lengthy car chase ensues, in which he finds Charlie and Vlad. However, Charlie and Vlad manage to escape in the middle of the chase.

Later on, Emerson, a detective, is revealed to be working for the Zec and he knocks Helen unconscious with a taser, and Charlie and Vlad kidnap her and take her to the Zec's hideout, a construction site. When Charlie talks to Reacher on the phone, Reacher tells him that he will beat him to death and drink his blood from a boot. Reacher and Cash, a former Marine gunnery sergeant, later storm the hideout and engages the Zec's men in a shootout.

In the ensuing gunfight, Reacher and Cash kill all of the men while Reacher kills Vlad by smashing him with a rock. As it begins to rain Charlie heads out of the office to personally confront Reacher. The two men then engage in a brutal fistfight and eventually, Charlie takes out his knife and attempts to stab Reacher.

Ultimately, Reacher disables Charlie and finishes off the assassin by stomping on his head hard. 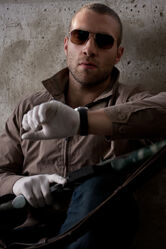 Charlie waiting for the right time to start his assassinations.