To cause deaths of Kerblam! customers via explosive bubble wrap in order to put automatons to be blamed for their deaths and put out of business so humans can have more jobs.

Charlie Duffy is the main antagonist of the Doctor Who episode "Kerblam!".

He was portrayed by Leo Flanagan.

Charlie came from the planet Kandoka and disliked that automatons got 90% of jobs whilst humans only got 10%. Wishing to put an end to automatons and make jobs 100% human, he lied about his applications to get into the Kerblam! warehouse on Kandoka's moon and became the maintenance man so he can have access to everything and nobody would expect him of criminal activity. He also studied cybernetics, explosives and teleportation.

During his time at Kerblam, Charlie developed a crush on a fellow worker named Kira Arlo. Sometime later, Charlie was partnered with Graham O'Brien (who along with The Thirteenth Doctor, Yasmin "Yaz" Khan and Ryan Sinclair were working undercover at Kerblam! to find out who had sent a message saying "Help Me" to the Doctor).

Charlie killed some of his fellow workers by using them as test subjects for his explosive bubble wrap, which caused whoever popped it to disintegrate. He planned to put the bubble wrap into packages to be sent out by Teammate robots to Kerblam's customers who would die when they popped the bubble wrap and that the Teammates would have been blamed for the deaths. However, Kerblam!'s system discovered what Charlie was doing and sent a Teammate to kill him, but it was decapitated by Kerblam!'s head of people Judy Maddox (who was unaware of Charlie's plan).

Later the system, in an attempt to show Charlie what it would be like to lose someone he cared about, sent two Teammates to take Kira to a room where she was given a Kerblam! package containing the deadly bubble wrap. Despite Charlie, Yaz and Ryan's attempts to get to her, Kira popped the bubble wrap and disintegrated, devestating Charlie. Seeing how desperate Charlie was trying to stop Kira from popping the bubble wrap, Yaz and Ryan realised that Charlie knew what was going to happen and went to tell this to the Doctor.

Despite his plan to kill Kerblam! customers failed, Charlie's wish for humans to have more jobs came true when Judy and Jarva promised the Doctor that they would make Kerblam! have more human workers. 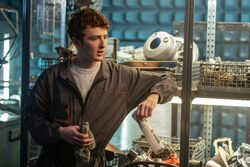 Charlie amongst the Kerblam! Men holding boxes of his explosive bubblewrap