In the original game he was a lonely taxi driver who desired to learn what happened to his son after he ran away. Upon learning of Twisted Metal and how the winner could get one wish he decided to enter in hopes of learning the truth. In the arcade winning he learns how his son became a serial killer known as Sweet Tooth and that ultimately Charlie killed him during the contest. Upon learning this Charlie is shocked and upset by his lose and wonders to himself if he'll enter next year. In the Lost ending instead of looking for his son Charlie is considerably more petty and only asks that he can continue to drive with little to no reaction after being told he killed his own son. When Calypso offers him a potion claiming it will let him live forever, Charlie hesitates but ultimately takes it. Upon drinking it Charlie collapses for just a moment before Calypso says he needs a driver to recruit more contestants every year and offers him the job. As Calypso claims Charlie can then live and drive forever he gladly accepts it.

In the second game Charlie is driving the vehicle Dark Tooth, a gigantic and more powerful version of Sweet Tooth's truck, serving as the final boss. In this game he attacks under the assumption that you just killed his son in the tournament and plans to kill you in retaliation. After blowing up the truck itself it's revealed Charlie was located in the giant clown head as he continues to fight until it's ultimately destroyed. After this the character meets up with Calypso to claim their prize.

In this continuity Charlie is the oldest son of Sweet Tooth is presumed killed until the ending clip where it is revealed he was supposedly spared by his father just in case something ever killed him. Under the belief that he was meant to carry on his father's twisted legacy Charlie decides he will enter the next Twisted Metal and use his prize to avenge his father. 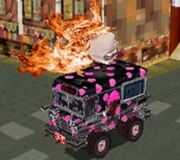