Assisting the gang in their schemes.

Stalking the Waitress.
Cooking.
Taking care of his mother.

Temperamental Dimwit
Charlie Kelly is one of the main characters on It's Always Sunny In Philadelphia. His list of bad things he did are here. Though he is generally less villainous and the nicer than any other member of "The Gang", he has also done some villainous actions. Though he and Dee aren't exactly good friends, he doesn't bully her like the other members do.

He is portrayed by Charlie Day.

Arguably the most unhappy member of the gang, Charlie is a volatile, tempestuous, and temperamental individual who is prone to Al Pacino-styled outbursts.

Like the others, Charlie possesses several self-important, narcissistic, egotistical, and manipulative characteristics. He never admits ignorance on any subject, despite being ignorant of just about everything, and often acts like he knows better than others. He tends to try and demonstrate his knowledge by throwing out terms associated with the subject in question, or simply mirroring what other people are saying, without any really understanding, making himself look like an unintelligent idiot. When called out on his painfully obvious illiteracy and general lack of intelligence, he gets incredibly psychopathic, defensive, and angry. He also has a problem with authority, and often ignores the gang's attempts to control his dysfunctional and unpredictable behavior. Also, whenever the Gang begin a new scheme, he often expects to be placed in a position of authority, such as being Dennis's campaign manager in "The Gang runs for Office" or being captain of the boat in "The Gang buys a Boat", despite being woefully unsuited for them. When denied something he wants, he will usually attempt to get it anyway through deceit and manipulation, never taking responsibility for the havoc he always causes as a result.s

Charlie's delusions of superiority and emotional volatility seem to cover up a deep-seated sense of shame and low self-esteem. His fits of rage often spring up when he senses he is being attacked, wronged or not listened to. The disproportionate amount of anger and the lengths Charlie goes to to revenge himself against slights real and imagined suggest that on a subconscious level, he is miserably aware and ashamed of his failings, and hates to be reminded of it. 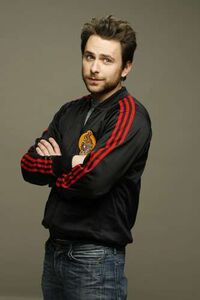 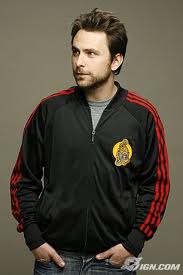 Charlie in his "Greenman" costume. 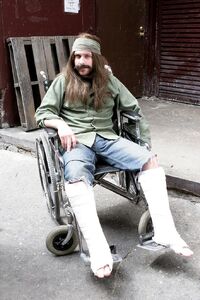 Charlie as Vietnam War veteran Ron Kovic from "Born on the Fourth of July."
Add a photo to this gallery 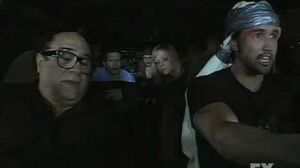 Wildcard Bitches
Add a photo to this gallery
Retrieved from "https://villains.fandom.com/wiki/Charlie_Kelly?oldid=3414819"
Community content is available under CC-BY-SA unless otherwise noted.