Aide to a U.S. Senator

To help Deckert overthrow the President of the United States (failed).

She was portrayed by Sunny Mabrey.

Charlie later met up with Stone and pointed out Deckhert talking to another general. Later, Charlie helped Stone escape when Deckhert's men came after him, taking him to her home. After briefly trying to seduce him, she left him alone to change.

Stone later discovered the general's body and cops approaching the house. Stone realized that Charlie set him up and was involved in Deckert's conspiracy.

Stone later tracked Charlie, now dressed in leather combat gear, to a warship where she, Alabama Cobb and the rest of their unit are preparing for their assault during the President's State of the Union address. He also discovered Charlie had an alive Gibbons captive. He later knocked her out, but not before she alerted the ship of his presence.

With the President as his hostage, Deckert ordered Charlie to escort Gibbons to the area he would frame the latter for the assassination. However, Stone took down her men before she could reach the rendezvous. She pulled her gun on Stone but he knocked her out again. After freeing Gibbons, Stone was held at gunpoint by Charlie again, but Gibbons shoots her down to her death before she could act. 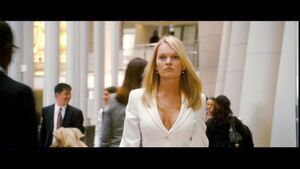 The beautiful Charlie Mayweather.
Add a photo to this gallery

Retrieved from "https://villains.fandom.com/wiki/Charlie_Mayweather?oldid=3289255"
Community content is available under CC-BY-SA unless otherwise noted.