Special Deputy at the US Marshals

Kill the Bondurant brothers and shut down their Prohibition-era moonshine business after Forrest Bondurant did not pay the cops (all failed).

Charles "Charlie" Rakes, also known as Charley Rakes, is the central antagonist of the 2012 film Lawless. He is a corrupt and merciless special deputy at the US Marshal service who enjoys antagonizing and tormenting the Bondurant family.

He was portrayed by Guy Pearce, who also portrayed Aldrich Killian in Iron Man 3, Kendall Duncan in Bedtime Stories, Leonard Shelby in Memento, Fernand Mondego in The Count of Monte Cristo, Dr. Emil Harting in Bloodshot, and Peter Weyland in the Alien franchise.

Charlie Rakes is a special agent sent from Chicago sent to crack down on illegal bootlegging in Franklin County, Virginia during the time of prohibition. The main source of the bootlegging business in Franklin comes from the Bondurant Brothers, Forrest, Howard, and Jack.

Rakes begins by sending the brothers little treats that increase every time and promises the Bondurants protection, provided that they give him money. Rakes soon loses his patience with the Bodurant brothers and visits Jack's friend and soon-to-be partner, Cricket as well as Jack. He suddenly punches Jack and commences to beat him severely, but lets him live, seeing it as a warning to the Bondurants.

The brothers soon respond by sending Rakes the severed testicles of two men who attempted to kill Forrest. Rakes then begins to harass the friends and allies of the Bondurants and tearing down most of Franklin's other bootleggers. He sends the Bondurants another warning, tare and feathering their cousin Spoony.

Finally, Rakes attacks the Bondurants. He leads a group of officers to one of Jack's stills. During the siege, he is cornered by Jack and Howard, the two chose to let him live and leave, not before Jack calls his nemesis a "nance" (a 1930's derogatory term for a gay or effeminate man). Insulted, Rakes seeks revenge and it doesn't take him long to hide it. Not so far, the other officers have apprehended Cricket and Jack's girlfriend, Bertha. He lets Bertha go, but takes Cricket aside and kills him by breaking his neck.

The Bondurants are declared the last bootleggers in Franklin and Rakes now has complete control over the county and plans to shut the bridge and trap the brothers like rats. Jack soon arrives solo, angry, and seeking revenge against the man who killed his friend. His plan comes into full circle when he shoots Jack and Forrest and Howard come to save him.

With victory closing in, it soon falls, when the town folks come to aid the brothers. A shooting soon breaks-out, during which, the Sheriff (who was once friends with the Bondurants and for the course of the film, grown tired of Rakes' ruthlessness and mistreatment of others) draws out his gun and shoots Rakes.

With the Sheriff regaining control over his men and wounded, Rakes is forced to flee. Jack chases after him and during the final confrontation, Rakes is shot by Jake and stabbed by Howard, killing him, freeing Franklin, and avenging Cricket's death.

Rakes is a clean-cut, calm, and intelligent man who spoke with a noticeable Chicago accent, but this was to veil his sadistic nature. It soon became a very thin and inefficient disguise; he is shown to have been a monstrous, ruthless, merciless, and violent man with little regard for ethics. Although he was an agent of the law, his methods for fighting crime and dealing with criminals were often brutal and occasionally even horrific. He was shown to be quick-tempered and extremely aggressive towards those he had perceived to have insulted him. He was shown to have a condescending view of the people of Franklin county, as well as people living in the backwoods in general. He held the people as inferior to him and thought of them as savages.

Charlie Rakes took great pride in his appearance; he was often shown to be wearing a fine, well-prepared suit. He also would apparently wear perfume and pluck his eyebrows to the point where he almost had none. Rakes' care for his appearance often made him subject to ridicule by several locals of Franklin county. The most obvious occasion where someone reveals their disdain for Rakes' appearance is when Jack openly calls Rakes a "nance", thus calling him a homosexual (although it's almost certain that he isn't gay, considering that he appears to have slept with, and possibly raped, a prostitute in the middle of the film, and there's no evidence that he may be bisexual). 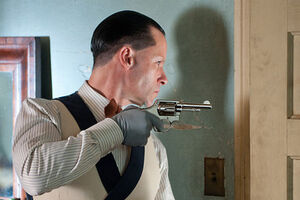 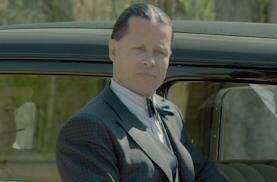 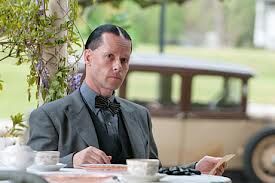 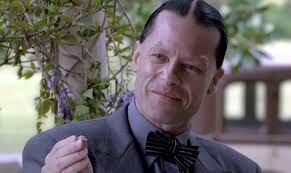 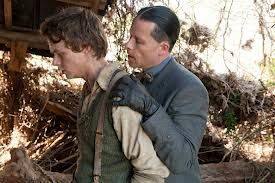 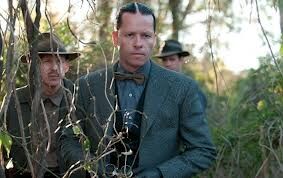 Rakes after being shot and stabbed by Jack and Howard.

Rakes drops dead as he dies from his wounds
Add a photo to this gallery
Retrieved from "https://villains.fandom.com/wiki/Charlie_Rakes?oldid=4077041"
Community content is available under CC-BY-SA unless otherwise noted.