Charlie Venner is the main antagonist in the 1971 film Straw Dogs and its 2011 remake of the same name. He is a ruthless and vicious resident of Wakely Town, who works as an handyman.

Charlie Venner is a resident of Wakely, Cornwall where he works as a handyman. He is the nephew of town drunk Tom Hedden (Peter Vaughn). Several years before the events of the film, Charlie was in love with local girl Amy Sumner (Susan George) before she left for America. It is suggested that Charlie did not treat Amy well when they were together.

At the start of the film, Amy returns to Cornwall with her American husband David Sumner (Dustin Hoffman). David hires Venner and his friends Norman Scutt (Ken Hutchison), Chris Cawsey (Jim Norton) and Phil Riddaway (Donald Webster) to help carry out repairs on the garage. When they first meet, Charlie acts friendly towards David. However, Charlie soon resents David for his timid ways. Also, Charlie is still in love with Amy, who rejects his advances.

Although the men openly harass David, he does nothing to stop them. Amy, who feels neglected by David, flirts with the men. One night, Amy discovers her cat hanging in the closet. She demands that David confronts the men.

Next morning, David makes an attempt to befriend the men, by inviting them in for a drink. He fails to mention their dead cat, and accepts their offer to join in on their hunt the following day. Amy is upset by David's lack of action.

During the hunt, Charlie abandons David and goes to the Sumner house, where Amy is sitting alone. Amy invites him in to question him about the cat. Charlie seduces Amy, who tries to fight him off. This starts a violent rape where Charlie slaps Amy and drags her by the hair onto the sofa. Then he tears off her clothes and proceeds to rape her. During the rape, Amy begins to embrace Charlie. However, Norman Scutt arrives and forces Charlie to hold Amy down while he rapes her too. Amy screams in agony while Charlie looks away in horror.

That night, David returns home to find a withdrawn Amy. She doesn't tell him about the rapes, but David vows to sack the men for betraying him. Next morning, David tells the men they are sacked and to never come to his house again.

David and Amy attend the church social that evening, but Amy is confronted by her attackers and has a mental breakdown. They leave the social. Meanwhile, Venner's cousin Janice (Sally Thomsett) makes off with village idiot Henry Niles (David Warner). Niles is a known pedophile and is despised by most people in the village including Charlie. Janice's brother Bobby (Len Jones) informs his father of Henry accosting Janice. Tom, Charlie and his friends search for Henry and Janice. Hearing the voices of the men, Henry gets scared and accidentally smothers Janice to death. Henry runs away, but gets knocked down by David, who takes him into his house.

David phones the pub to ask for a doctor to see Henry. The barman alerts Tom and his friends of Henry's whereabouts. At the Sumner residence. Charlie, Norman and Chris ask to go in the house while Tom and Phil wait outside. Charlie hits Henry and interrogates him about Janice. David stops the men from hitting Henry and gently questions Henry. David tries to convince the men that Henry is harmless, but they don't believe him as they know what Henry is like. Upon failing to hear about his daughter's whereabouts, Tom attempts to break into David's house. Charlie joins in by throwing bricks through the window. He shouts at David to let them have Niles before someone is hurt. The local magistrate Major Scott (T.P. McKenna) arrives at the scene. He tries to reason with the men, but is shot dead by Tom, who is armed with a shotgun. Knowing that he will be an accomplice to murder, Charlie reasons that they can only continue what he started.

During the siege, Charlie asks Amy to help them, promising not to let the men hurt her. Amy almost favours Charlie over David, but David stops her and forces her to comply. David begins to fight back throwing boiling whiskey over the men, temporary incapacitating them. Charlie's face is burned by the hot liquid. Tom tries to break in, but David knocks his gun out his hand and causes Tom to shot his own foot. Then, David beats Chris to death with a fire poker. Charlie attempts to shoot David, but his alerted by the sound of Amy screaming. David and Charlie are briefly united in trying to stop Norman from raping Amy for the second time. Amy shoots his best friend dead, David fights Charlie and eventually throws a bear-trap over his head, killing him slowly.

His role is pretty much the same in the remake.

In the novel 'The Siege of Trencher's Farm', which Straw Dogs is based on, Charlie was never in love with Amy (named Louise in the novel). Neither is he related to the Heddens, nor does he take part in the siege.

Although Charlie appears pleasant and levelheaded, in reality he is a violent and dangerous man. Charlie is an extremely jealous individual who is still madly in love with his former love Amy Sumner and cannot accept she is married to another man. As such, Charlie hates David Sumner and wishes to kill him so he can have Amy for himself. Although Charlie succeeded in raping Amy, he showed some remorse over the incident. During the siege on Trencher's Farm, Charlie intends to kill David as well as Henry Niles, although he tries to protect Amy from the mob. Charlie is forced to kill his friend Norman who tried to rape Amy for the second time and ends up being killed by David despite the fact that Charlie was trying to save Amy.

Charlie prepares to rape Amy in the original film. 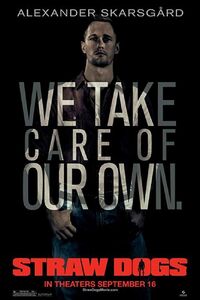 Charlie's character poster in the 2011 film. 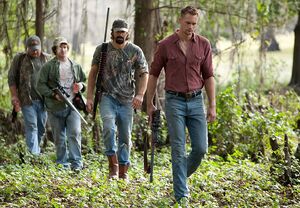 Charlie hunting with his friends in the opening of the 2011 film.

Charlie's death in the 2011 film.
Add a photo to this gallery

Retrieved from "https://villains.fandom.com/wiki/Charlie_Venner?oldid=3546416"
Community content is available under CC-BY-SA unless otherwise noted.