Charlotte Bayes was seemingly a loving mother and wife, and faithful member of the congregation at St Anthony's Episcopal Church in Roxborough, where her husband Mitchell Bayes played the organ. Yet behind the facade Charlotte had a dark side as well.

An alcoholic, when drunk she would yell at her children Ryan Bayes and Tina Bayes for hours, and hit her husband, though he never hit her back. As a result of this, Charlotte and Mitch had separate bedrooms, with Mitch unable to sleep unless his bedroom door was locked with multiple locks. Charlotte favored her son Ryan over her daughter and even her husband. On the night of her husband'sq death in 1990, Ryan had a date to go to his high school dance, and Charlotte insisted on teaching him how to dance before driving him there, while Mitch drove Tina to a sleepover. After Mitch left, the phone rang and Ryan answered it, only to be told in no uncertain terms by the caller, Mr Enright from their church, that Mitch was having an affair with his wife Judy Enright, and that the two were at a motel that very minute. Mr Enright went on to call Mitch a cheating sinner. Afterward, Charlotte guilted Ryan into skipping his date to stay home with her, and proceeded to get drunk. When Mitch returned home, his clothing wet from the rain, he chastised Charlotte for making Ryan miss his date. Charlotte slurred out that apparently they both had had dates. For once, Mitch stood up to Charlotte and offered to drive Ryan to the dance once he changed into dry clothes, stating that no teenage boy wants to stay at home on Saturday night with his mother. This enraged Charlotte, who insisted that Ryan did want to be with her, unlike Mitch who'd rather be sneaking around with 'cheap Christmas trash' like Judy Enright. As Mitch proceeded upstairs to change, Charlotte followed him, hissing the entire time, ordering him not to walk away from her, grabbing at a fireplace poker as she stumbled up the stairs. In a fit of rage, she swung the poker into a large mirror adorning the upstairs hallway, which shattered and startled Mitch, who unsuccessfully attempted to slam the door to his bedroom on her. Charlotte then attacked Mitch with the poker while Ryan watched, slurring out for him to get the van once she was done. With Ryan's help, Charlotte dumped the van and Mitch's body in Kensington, a rough area of town frequented by prostitutes, a fact that Ryan knew from driving around with his friend, Tom Walsh, to look at them. At Charlotte's insistence, Ryan also staged the scene to look like a solicitation gone bad, with his friend Tom's porno magazines scattered through the van along with some discarded crack vials found in the alley. The following morning, a sober Charlotte played the part of the respectful wife on her way to church when Gil Sherman notified the family that Mitch's body had been found, claiming not to understand why he was found in Kensington, and insisting that Mitch didn't use prostitutes. Despite doing a poor job staging the scene, Charlotte wasn't immediately caught, and the case went cold.

Thirteen years later, in late 2003, Charlotte is now an aging woman suffering from Alzheimer's. Estranged from her daughter Tina for many years, she is cared for by her son Ryan, who thinks of her as a burden and frequently lets her wander away. One such time, she is found by a patrolman in the cemetery where Mitch was buried, clutching his obituary in her hand and muttering about him, still in her nightgown. She is taken into custody for 'disturbing the peace', and piques the interest of homicide detective Lilly Rush, who is called down to see her by the patrolman who wants to cover all the bases concerning the murder victim she keeps muttering about. Lilly realizes her memory is fading, and decides to reopen the case while she still has something to offer as a witness, much to Ryan's dismay as he'd rather let the case stay cold. Lilly and the rest of the homicide unit, along with the original assigned detective Gil Sherman slowly put the pieces together, reuniting Tina with her mother and brother along the way. Tina is hopeful to prove that her father wasn't involved with prostitutes, but recoils when she finds out that Ryan is the prime suspect. With her reluctant help, and Lilly's prodding, Charlotte relives shouting at Ryan while staging the scene. Lilly is now convinced that Ryan killed his dad and his doting mom who adored him covered up for him. After his arrest, much to everyone's surprise, Ryan reveals the truth behind the outward appearance of his nice, churchgoing family and confused, scared, invalid mother, stating, "You didn't see her in her prime." Charlotte is arrested and led to the same cell Lilly had earlier released her from, and Ryan and Tina reunite and comfort each other. 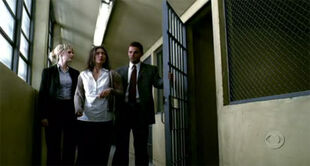 Charlotte arrested
Add a photo to this gallery
Retrieved from "https://villains.fandom.com/wiki/Charlotte_Bayes?oldid=2697006"
Community content is available under CC-BY-SA unless otherwise noted.