20th child and 9th daughter of the Charlotte Family

Charlotte Broyé is a minor antagonist in the Whole Cake Island Arc, from the anime and manga series One Piece. She is the 20th child and ninth daughter of the Charlotte family, the younger twin sister of Brûlée, the officer of the Big Mom Pirates, and as serves to the Totto Land's Minister of Meringue, governing over Milenge Island.

Broyé is the slim woman who had a brown eyes, a black eyebrows and the light pink hair with the four locks. She wears a yellow dress with the long tall princess, a white collar, a light green cape with a pink underside, a white pair of elbow-length gloves and a yellow crown on her head. She has a short, a thin, a waist and a short. Unlike her younger twin sister's dress is yellow who has a cut open, reveal her part of the breasts. She has a bottom of hips who has a white peplum curves downwards. The longer dress who has a pale beige, and it side with three rows of roses. And she holding her sword who has a long-handled with the green, dark yellow and black sheath.

Broyé is unknown about her personality. Later, she is frightened by the Big Mom's crew who was destruction of Mother Carmel's photo. Broyé takes her part to plan it assassinate the Vinsmoke Family, who can be serious loyal to her family and crew.

As a Minister of Meringue, Broyé's authority over the Milenge Island, who has the officer of the Big Mom Pirates, her currently abilities and powers has been unknown, she has a low-ranking members of the crews, and she was presumably strong as the officer of an Emperor-led crew.

Her weapon who wielding the sword on multiple occasions. 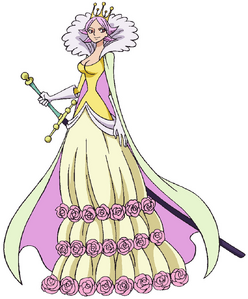 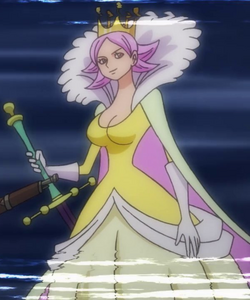 Broyé's concept art from the anime. 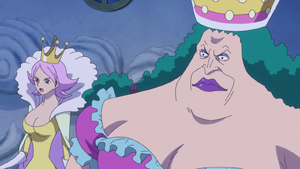 Charlotte Broyé and Charlotte Compote.
Add a photo to this gallery

Retrieved from "https://villains.fandom.com/wiki/Charlotte_Broyé?oldid=4322998"
Community content is available under CC-BY-SA unless otherwise noted.