Guardian of the Vault of the Warrior

Charlotte Flampe is the seventy-seventh child and thirty-sixth daughter of the Charlotte family, and a member of the Big Mom Pirates. She is also the minister of Honey of Rokomitsu Island and the President of the Katakuri Fan Club. Due to her actions, she is a minor antagonist in the Whole Cake Island Arc and Wano Country Arc.

Flampe is obsessiveive girl who admires her older brother Katakuri because of his perfect status. Because of that, she is willing to interrupt his battle against Luffy in order to win his attention. However, her admiration is merely superficial, as she became horrified of Katakuri's fanged mouth. She is also petty and immature, as she mocked Katakuri's mouth and threatened to display it to everyone.

She is arrogant and egotist, as she takes pride of being the Charlotte family favorite younger sister; proclaiming herself as the “King of sisters” She is also sadistic, as she takes enjoyment of torturing her opponents along with her subordinates. Despite her sadism, she seems disgusted by blood, as she derided Luffy for being bloodied during his fight with Katakuri and likewise became angry and disgusted with Katakuri when some of his blood splashed on her face.

As the minister of Honey, Flampe has authority over Rokumitsu Island, furthermore as a member of the Big Mom Pirates, she is able to give commands to low ranking subordinates despite her young age. Flampe is able to hide her presence, as neither Katakuri nor Luffy noticed her, until she revealed herself.

However, she doesn't have a strong will, as she was knocked out by Luffy and Katakuri's Haoshoku haki.

Flampe's main weapon is a blowgun, which she uses to shoot silent needles. She is a skilled sniper, and her needle shots are silent, which allowed her to incapacitate enemies by surprise. Her needles are so silent that not even Luffy or Katakuri, two fighters with Kenbunshoku Haki, noticed her interference. 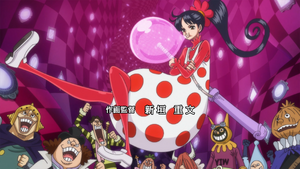 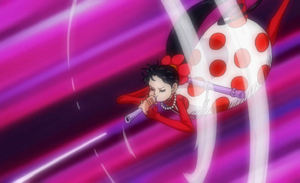 Flampe shoots from her blowgun.