Villains Wiki
Register
Don't have an account?
Sign In
Advertisement
in: One Piece Villains, Female, Anime Villains,
and 22 more

Forty-second child and eighteenth daughter of the Charlotte family

Taking care of her family.

Charlotte Galette is a supporting antagonist in the Whole Cake Island Arc and a minor antagonist in the Wano Country Arc from the manga and anime series One Piece. She is the eighteenth daughter and forty-second child of the Charlotte Family, the older twin sister of Poire, the officer of the Big Mom Pirates, and as serves to the Totto Land's Minister of Butter governing over Margarine Island.

She was voiced by Ai Maeda in Japanese and Brianna Roberts in English.

Galette is the young woman who has a pale skin and shoulder-length fuchsia hair, with the curls at the ends. She had a yellow-eyes and thick eyelashes. She wears a red dress, dark purple feather coat, magenta gloves and a arrow shaped horns on the top of her head.

Galette take cares with her family, while she asked her mother tries not to kill her older brother Moscato, and she saw her older brother Cracker has been defeated by Luffy. She is underestimating and condescending to prone the others, while Galette has to fight Nami who ummoned a large lightning bolt. She is very furious when her younger sister Praline attacked by the Sun Pirates mocking her to kill the Straw Hat Pirates.

She has possesses with the high level of physical strength, while Galette is sending to Luffy and Nami at the army to deal with it. Along with Daifuku and Smoothie, had managing to take down with Luffy, Sanji, and Reiju through out meanwhile is will heavy weak.

She has possessed with stronger will, been unable to stand in the bust at Big Mom's Haoshoku Haki to reclaims conscious for the loud screaming.

She has the Bata Bata no Mi, type of her Devil Fruit of Paramecia which allowed to the creating an control butter. Galette using her sticky butter with immobilize and bind out of the opponents.

This show that she used the mounting guns of Gatling at the Queen Mama Chanter of the attempted with kill down King.

While she developing for craved from croquembouche and through in the rampage went to Sweet City, she and her brother Moscato tries to calm down, now Galette is hosting cowards to him. She, Opera, and Mont-d'Or pleased from not attacking Moscato, now Galette pulling out of Moscato's spin, surprised all of her siblings and their crews at Sweet City. Later, Big Mom sent Jinbe to satiating. However, she ordering at the soldiers with fastest to removing Mascato's bodies. 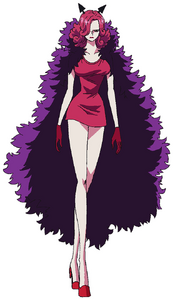 Galette's concept art from the anime.

Galette's color scheme in the manga. 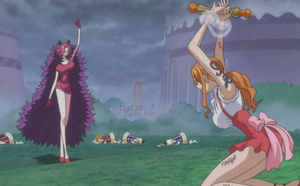 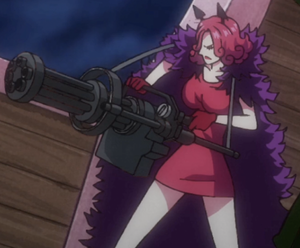 Galette with her Gatling gun. 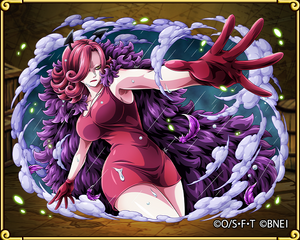 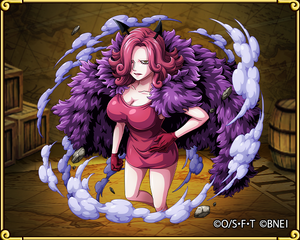 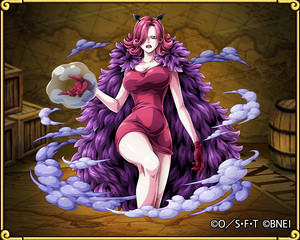 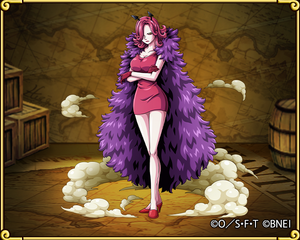