Villains Wiki
Register
Don't have an account?
Sign In
Advertisement
in: One Piece Villains, Manga Villains, Anime Villains,
and 31 more

Serving the Charlotte Family and the Big Mom Pirates.

Kill Luffy for defeating Charlotte Katakuri.
Kill Chiffon for her betrayal (all failed).

Charlotte Oven is a the fourth son and fifth child of the Charlotte Family officer of the Big Mom Pirates, and also the Minister of Browned Food. He is a major antagonist in the Whole Cake Island Arc in One Piece. His bounty is 300,000,000 Berries.

He was voiced by Masafumi Kimura (who also voiced Igniz in The King of Fighters 2001, and Matthai Reese in Toaru Majutsu no Index) in Japanese.

Like most children of the Charlotte Family, Oven is shown to be protective of his mother and his family. He has a great deal of respect for his sister, Charlotte Pudding as he accepted to not intrude her while baking the wedding cake. However, he is ruthless to those who are not a part of his family or those he does not consider to be a part of his family. He take betrayals extremely seriously even though Charlotte Chiffon is one of his siblings, like his mother, Big Mom, he is willing to kill her for being a traitor to the family. He has no concern for his birth father and stepfathers and no longer see them as his family due to their lack of blood relationship with his mother and would take it upon himself to hurt them if they got in his way. He was willing to attack and possibly murder one of his fathers, Pound, when he got in his way. Unlike many members of his family, Oven can become wrathful when things do not go his way and would like to exact revenge when one of his siblings have been defeated.

As an Minister of Browned Food, Oven has control over Yakigashi Island. As one of the Executive officers, Oven has authority to low ranking subordinates. Oven is considered one of the "monsters" who compared his strength to his older brother, Charlotte Katakuri and younger sister, Charlotte Smoothie which make Oven's strength formidable.

Oven has tremendous strength when grab Chopper and later Chiffon with one hand. He has extraordinary durability, endurance and stamina when he withstand Niji's kick to release Chopper and Sanji's kick at his face as well survived from Capone Bege's ship paddles and kept standing even being severely wounded after taking Ichiji's Sparking Valkyrie.

Oven has eaten Netsu Netsu no Mi, a Paramecia-type devil fruit that increasing temperature and heat. He heated Pedro's sword which making it dangerous for anyone to block Oven's attacks. Oven can boil water to burn anyone's ship when attempting to escape. Oven also imbues his heat to his naginata as he severely injures his former stepfather, Pound.

Oven can imbue his body with Busoshoku Haki to damage Devil Fruit Users and bypassing Logias.

Oven has Kenbunshoku Haki as he sense upcoming attacks and dodge with his own speed.

In childhood, Oven, Daifuku and Katakuri eaten Doughnuts. He and Daifuku laughed when Katakuri continue eating doughnuts with his expandable mouth.

Oven first appears when the wedding between Vinsmoke Sanji and Charlotte Pudding was about to start. When the wedding starts and Luffy ends up crashing the wedding, Oven along with his siblings begin attacking Luffy's allies and prevents him from trying to destroy Big Mom's Mother Carmel's photo. Oven gets into a skirmish with Brook and some of Luffy's allies. After Big Mom's scream, Oven and his family tries to corner Luffy and his allies until, the tamatebako box that Du Feld held onto falls causing the castle the wedding was taking place on to fall over. With the castle falling, the group escapes.

Oven and his family mobilizes their units to go after the Straw Hats, the Fire Tank Pirates, and the Vinsmoke Family. Oven appears on Cacao Island where he was looking for any enemies on the island. He comes across one of his father's, Pound, who Oven mocks. When he finds that Chiffon was with Pudding, he attacks her for being a traitor and almost kills her until Sanji saves her. Capone Bege also appears and runs him over with his tank form. Oven tries to prevent Bege, Sanji, Pudding, and Chiffon from leaving Cacao Island but Pound attacks him. Angry that Pound attacks him, Oven gets a large blade heats it up and seemingly decapitates Pound.

Oven later assembles his men and the people of the city to throw away their mirrors or face punishment as he tries to set up a trap for Luffy in case he came out of the Mirror World after fighting Katakuri. When Pekoms helps get Luffy out of the mirror world away from his enemies and Sanji intervenes, Oven and his family tries to attack and corner them but the Vinsmoke Family appears. The Vinsmoke Family appears and distracts them from going after Luffy and Sanji. Oven is furious when he heard that Luffy defeats Katakuri and boils the ocean to prevent him and his allies from leaving Totto Land. Despite trying to hold them back, he is attacked by Ichiji and the Straw Hats are able to get out of Totto Land with help from the Fishman Pirates and Germa Kingdom.

Oven stayed at Totto land with the captives of Vinsmoke Niji and Yonji. He took them to Whole Cake Island and left the brothers to be experimented by Prim, Kato, Brownie and Anana. 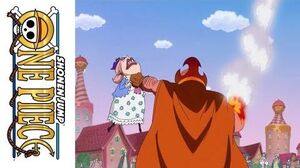 One Piece - Official Clip - It obviously wasn't you