Villains Wiki
Register
Don't have an account?
Sign In
Advertisement
in: One Piece Villains, Manga Villains, Anime Villains,
and 41 more

Brother Peros (by his siblings)

Powers of the Pero Pero no Mi (Lick-Lick Fruit)

Charlotte Perospero is the eldest son and first child of the Charlotte Family, officer of the Big Mom Pirates, Totto Land's Minister of Candy, and a major antagonist in the Whole Cake Island Arc and a supporting antagonist in the Wano Country Arc of One Piece. He has a bounty of 700,000,000 berries, and is the archenemy of Carrot.

He was voiced by Yūya Uchida in Japanese.

Perospero is a very skinny man with a pointed nose and a very large tongue. He wears a long yellow coat reaching down to the bottom of his legs, with the top buttons resembling large pieces of candy. He wears a large striped hat with lollipop-shaped objects on its rim.

After Pedro's suicide explosion, Perospero lost his right arm and used his powers to create a prosthesis.

Perospero is extremely sadistic and cruel who loves tormenting and mocking his enemies such as Vinsmoke Judge when the Big Mom Pirates reveal their treachery toward the Vinsmoke Family.

Perosperos has no qualms of dealing traitors such as Bege who attempted to kill his mother.

Like his mother, Perospero loves sweet mostly candy. He turn his victims into candy to lick them such as Caesar, Chopper and Brook.

Like most of his family, Perospero is afraid of his mother, Big Mom for her eating disorders. He lied to Big Mom of the Straw Hat Pirates has the remaining of the Wedding Cake.

In spite of his cruelty, Perospero cares for his younger siblings. He got along with Charlotte Katakuri since their childhood, convincing his younger brother to hid his mouth to make friends. He is one of the few who doesn't scold Katakuri of his pelican eel-like teeth. He attempted to rescue Brulee from Luffy.

In spite of getting along with his siblings, he called Daifuku as useless for his failure of attacking the Straw Hat Pirates. He agreed with Pudding to create a substitute wedding cake for his mother to save his lifespan.

In his mother's alliance with Kaido, Perospero has trust issues as he will not forget after King pushed Queen Mama Chanter off the waterfall. He is also disapproved of the alliance when he believes the Big Mom Pirates will take all of the glories.

At some point in his life, Perospero was ordered by his mother; Charlotte Linlin to construct a lab identical to Caesar Clown's lab on Punk Hazard. After creating the lab, Perospero reinforced the building in case they wouldn't have to deal with any hazards.

On Whole Cake Island, Big Mom developed a craving for croquembouche, causing her to enter a state of tantrum and eat anything in her path. After Big Mom gave Caesar another chance to complete his gigantification research and revealed that they had built a new lab for him to work in, Perospero appears before Caesar while possessing his heart that he received from Vito. Perospreo then squeezes Caesar's heart in order to cause him pain, Perospero threatened to turn his victim into candy and lick him if he can't complete his research in two weeks.

After Monkey D. Luffy and Nami were defeated by Big Mom's army, Perospero went to the Prisoner Library to watch the captive Straw Hat Pirates on display inside a book, Perospero then laughed at how Luffy had tried to challenge her. His younger brother; Anglais then arrived to inform Perospero and his siblings that the Room of Treasure has been infiltrated by an intruder. On the day of the wedding, Perospero welcomed some of the guests that arrived and made a candy escalator so they can arrive at the wedding venue quickly and handed out lollipops to the children that participated. Perospero then participated in the festivities and celebrated when Sanji and Charlotte Pudding arrived for their wedding. After Luffy began causing chaos at the wedding, Perospero along with several of his siblings witnessed Jinbe resigning from the Big Mom Pirates.

Moments later, despite Brook destroying the picture of Mother Carmel, Perospero proceeded with the plan of killing the Vinsmokes and incapacitates them to their seats with candy. He then began mocking Judge as the commander of Germa 66 cried due to Big Mom's betrayal, but soon became distracted by a call from Capone Bege. As he went after Luffy, Charlotte Katakuri ordered Perospero to kill the Vinsmokes. Moments later, Luffy caused Big Mom to start screaming to the top of her lungs, which incapacitated Perospero and his siblings before they could kill the Vinsmokes. This act allowed Sanji to free his family from their grasp and allowed them to reclaim their raid suits.

Perospero and his siblings were later given mochi earplugs by their brother Katakuri and got back on their feet. They tried once more to kill the Vinsmokes. Perospero marveled at their suits and recalled their famed technology. He attempted to encase them with his candy again but received several punches to the face from Ichiji. Perospero then protected his mother with a wall of candy when Bege tried to kill Big Mom in his fortress. He soon prevented Bege from moving the castle by trapping his legs in his candy. Perospero was then shown with his siblings, awaiting the alliance's next move, saying that it would be suicide if they step out due to being surrounded by the Big Mom Pirates.

As Big Mom assaulted the fortress, her subordinates stood by and prepared to attack. Right after Bege transformed back into human form and the Vinsmoke Family jumped out, the Big Mom Pirates fired a round of bullets at them, but Ichiji and Niji manged to block them. As Caesar tried to fly away with Bege, Perospero created a wall of candy to block their way, but it was destroyed by a combined attack from Ichiji, Niji, and Yonji. Despite this setback, the Big Mom Pirates overwhelmed Luffy, Sanji, and the Vinsmoke Family. However, the Tamatebako dropped to the base of the Whole Cake Chateau and the bomb inside the chest exploded, causing the castle to topple over.

As the castle collapsed, the Big Mom Pirates fell with it. However, they were saved when Streusen used his ability to turn the falling castle into soft cake. Perospero was later alerted by Smoothie that Big Mom was suffering a craving illness for cake and was further alarmed when he heard that Streusen was severely injured from the fall. Perospero managed to buy time for the Big Mom Pirates by telling his mother that the Straw Hats had a spare wedding cake. However, before leaving to go after the Straw Hats, Big Mom threatened to kill Perospero if he lied, leaving him terrified. After Big Mom left, Perospero lamented on how another cake could not be made within a short amount of time but was relieved when Pudding came up with a plan. Perospero joined Brûlée, Daifuku, and 10,000 Chess Soldiers inside the Mirro-World, awaiting further instructions.

Perospero later joined his brother Katakuri on the Thousand Sunny. When he saw a huge explosion at the Seducing Woods, he assumed that Big Mom dealt a fatal blow to the fleeing Straw Hats. Afterwards, he spotted Brook and Chopper as they returned to the Sunny with the Shark Submerge III, Perospero taunted the duo about the possible death of their friends. He did offer them a chance to escape, but the two Straw Hats refused, intent on reclaiming their ship. After Brook and Chopper defeated numerous Chess Soldiers on the Sunny's deck, Perospero simply reminded them of his belief that none of their friends were coming back. He then took direct action against the two Straw Hats, covering them with candy and intending to kill them by turning them into candy. Katakuri then told Perospero that they would soon have company, and Perospero thought it would just be Big Mom, but was shocked as he saw the Straw Hats emerge while still being chased by her. He sent a candy iron maiden that was covered in spikes at the Straw Hats, but Luffy destroyed it with a fiery punch, to his great shock.

Perospero ordered Mont-d'Or through a Den Den Mushi to surround the coast with battleships. While standing on the coast, he trapped the Sunny in candy before the Straw Hats could fly away on the ship with Coup de Burst. Perospero was then attacked by Pedro, but he was able to block the mink's strike before pinning him to the ground. However, he was surprised as Pedro lit some bombs in his jacket, engulfing Perospero in a suicidal blast, which also freed Chopper and Brook from his candy.

Perospero survived the explosion, but was grievously injured and lost his right arm. He got back on his feet but could not stop the Thousand Sunny from escaping the coast with Coup De Burst.

He joined his mother in pursuing the Straw Hats by creating a candy slug that allowed his mother to follow the enemy on water. He was perched on her shoulder and having created a candy arm, he voiced his desire to torture them as revenge for Pedro taking his arm.

As the Straw Hats were fleeing, he contacted Katakuri who was relieved to hear that he survived. Perospero voiced that he was chasing the crew with his mother and planned to get even.

He fought and was defeated by Nekomamushi.

As a minister of candy, Perospero has control over Candy Island. He is one of the monsters who strength is compared to his younger siblings (Charlotte Katakuri and Charlotte Smoothie) which makes him formidable. His bounty of 700,000,000 proven to be a threat for the World Government's operations. Even if the part of the plan of killing Sanji fails, Perospero holds the authority to continue the plan to kill the Vinsmoke Family.

He has immense durability and endurance after got punched by Vinsmoke Ichiji and got exploded by Pedro's dynamites only to lose his right arm.

Perospero eaten a Paramicia devil fruit known as Pero Pero no Mi (Lick-Lick Fruit) and made him the Candy Human. He has the ability to create waves and wall made from candy after licking his candy cane. His candy also be used to trap their enemies and unable them to move such as trapping the Vinsmoke Family despite of the physical strength from modifications. Only flame can break candy such as Luffy's "Red Hawk". His candy can also be used as prosthetic after lost his right arm from the explosion by Pedro.

Perospero can imbued and armored himself with Busoshoku Haki to bypassed Devil Fruit users that includes Logia types.

Perospero can sense the present of individuals and dodge with his own speed. 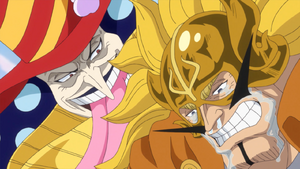 Perospero showing his sadistic side while mocking Judge. 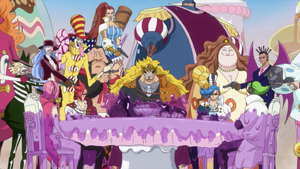 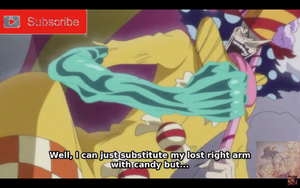 Perospero with a candy arm 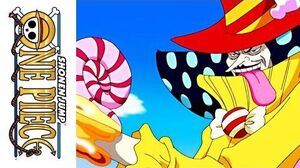