Taking Souls of the condemned across the Infernal River to Limbo

Make sure all the Souls he carries gets to Limbo (both failed).

Charon is the ferryman of the dead who appears as an anthropomorphic boat with a giant ship for a body. His sworn duty is to ferry the souls of the condemned across the infernal River Acheron, to Limbo beyond.

He was voiced by Bart McCarthy, who also voiced Virgil.

Although he is physically incapable of directly attacking people due to his lack of any actual limbs save for the head, Charon is able to summon various Demons to fight Dante. He is later killed after Dante uses an Asterian Beast to tear his head off. His severed head is later shown within the Citadel of Limbo, still repeating the inscription from the Gates of Hell. In the game, when you find his severed head in the citadel, the player can push it off into the Abyss to get the "Burning Eyes" achievement. 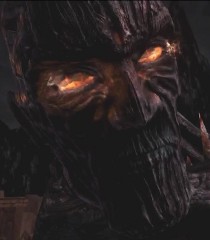 A close-up look at the head of Charon.
Add a photo to this gallery

Retrieved from "https://villains.fandom.com/wiki/Charon_(Dante%27s_Inferno)?oldid=3458908"
Community content is available under CC-BY-SA unless otherwise noted.