Turn Omi to the Heylin Side (briefly succeeded).

He was voiced by Jason Marsden in Xiaolin Showdown and later by David Kaye in Xiaolin Chronicles.

At one time, Chase was on the side of good; however, he was told by Hannibal Roy Bean that he could only achieve his destiny as the greatest warrior on the Heylin side. He was convinced to drink the Lao Mang Long soup, which accentuated his strength at the cost of his soul. The main ingredient in the soup is dragons. This was demonstrated when he tried to eat Dojo Kanojo Cho. However, at times, he does have a taste for humans, as well, as seen by his attempt to devour Raimundo Pedrosa.

Chase has lived for so long he has been around the world. Wherever he went, he defeated great warriors. Whenever he either defeats a warrior or simply gets a warrior to swear loyalty to him, Chase takes control of their chi and their physical form, transforming them into a legion of "Jungle Cats." The Jungle Cats are lions, tigers, and panthers, but on Chase's command, retake their human forms, or other forms such as birds. Chase can give the cats any command by simply snapping his fingers.

Some of Chase's defeated warriors, whom he, using his dark Heylin sorcery, turned into his minions, include:

It is also arguable that Jack Spicer is his on-and-off minion.

Chase can turn into a reptile-like creature before or after drinking the potion. The reptile form stands on two legs, has large claws and teeth, and enhances Chase's abilities.

When in human form, he takes the appearance of a young man in his early twenties, with Asian tinted skin and yellow slitted eyes. His hair rises above his head and is streaked with green. He wears a suit of armor with shoulder guards, pads around his knees and a belt with his insignia on it.

Chase is a very proud character, holding his fighting skills in high regard. He deems most other characters as below himself, showing no respect or even acknowledgment of their abilities (with the potential exception of Hannibal Roy Bean).

This ego affects his modus operandi as well; most of his plans are inherently grand. He spends most of season two turning Omi to evil, and he later resurrects Wuya without the majority of her powers. In addition to his large-scale schemes showcasing his ego, he does have a knack for subtlety (using a spy to gain information on the Xiaolin Monks and manipulating events during season two). He relies on fear to keep his minions in line.

Chase is well-known for his contempt of the notion that Shen Gong Wu are necessary to win battles. Even when fighting showdowns for personal gain, he relies on his martial arts alone. On the few occasions when he does use Shen Gong Wu, he usually uses them for manipulating opponents as part of a larger plan (an excellent example is when he challenged Omi to a conventional Xiaolin Showdown in The New Order. He only did this as a ruse so the other monks would not suspect of an alliance growing between him and Omi).

When Chase was on the side of good, his personality was similar to both Omi's and Raimundo's. His lighthearted appearance and manners easily won over Omi when they first met 1,500 years previously. His quest to be the strongest warrior would eventually lead him to betray his friends.

Though he is evil, Chase does have a strong code of honor and keeps his promises. When he had the monks captured, Monk Guan challenged him to a showdown for their freedom. Chase lost the showdown, and willingly released the monks. Omi also pointed out once that the good in Chase is stronger than he realizes.

Wuya: Chase's most notable relationship is with the Heylin Witch, Wuya. During season two, she left her former partner (Jack) and moved in with him, and it was hinted at some form of partnership. After he returned her to solid form (albeit without her full magical powers out of fear of being overpowered and/or overthrown, which even Wuya admitted was smart and understandable, as she would have done the same thing had their roles been reversed), they worked together on numerous occasions, and Wuya seemed to live with him in his lair. Often, their alliance was somewhat strained due to Wuya's treacherous ways and Chase's ego. He kept her under careful supervision, especially to prevent her from hoarding Shen Gong Wu to rebuild her power. They eventually settled their differences for the benefit of evil.

Jack Spicer: Although he on occasion teamed up with the evil boy genius, Chase held little love or respect for his troublesome fan. At times he was impressed with Spicer's persistence, but he generally regarded him as an inferior insect. The one time Chase commented on Jack's surprising skill was when Kimiko was impersonating Jack.

Hannibal Roy Bean: This is the only character of whom Chase has ever shown any fear, aside from perhaps Wuya. In a way, Hannibal served as a mentor to the Xiaolin-turned-Heylin warrior by turning him to evil and exposing him to the freedom it gave. In many ways, they are similar—both are highly cunning and ruthless in their ways—yet they differ on just as many. They truly hate one another and openly act hostile in each others' presence. Hannibal is the only threat to Chase. Chase proved his fear when he showed his anger when Hannibal was first released. He said that releasing Hannibal was "far worse than the world coming to an end".

Shádow: Chase Young created her from one of his ribs and took her in as his apprentice. Both of them get along very well and maintain a good relationship. It has been hinted that he may be in love with Shadow. In "Laws of Nature", he tells her that she is quite the romantic, and that is what he enjoys most about her. He also told her that she is a pure delight, and that she is his promise, his hopes, and his future. He hopes one day he'll rule the world with Shadow side by side. Shadow eventually defected from Chase and decided to work alone.

Omi: Omi is most likely the only character for whom Chase has any respect, with Chase having spent most of season two turning him to evil like Hannibal did to him 1,500 years ago. In the field and in private, Chase has complimented his martial arts skill and creativity on numerous occasions. It seems he finds a relationship with Omi, acting like he has known Omi for years. He always finds a way to help him, probably trying to convince Omi that the Heylin way is not necessarily the way to hell. In "Chase Lays An Egg," Chase reveals to Omi that they are related.

Kimiko Tohomiko: There have been little to no interactions, but on a couple of occasions, Chase seemed to flirt with her during battles, even knowing that she was under disguise as Jack after the passing of the Heylin Eclipse.

Raimundo Pedrosa: Chase's only significant interaction with him occurs when Raimundo tries to fight him head-on for Omi's freedom in the second-season finale, only to be subdued by him very quickly. Once he has Raimundo in his grasp, he turns into his reptilian form and attempts to eat him (the only time that he attempts to eat a human rather than a dragon). He is foiled, however, when Clay pulls Raimundo out of his clutches just before he can take a bite out of him. Chase respects Raimundo's loyalty and devotion to Omi, but little else.

Clay Bailey: There are no truly important interactions between Chase and Clay, but Clay has made several offhand insults toward Chase whenever he is not around the heroes, indicating his lack of respect for his evil.

Master Monk Guan: Guan and Chase were once comrades-in-arms who fought alongside Grand Master Dashi to defeat Wuya 1,500 years ago. Despite their history together, the two have little contact with one another in the series. Their only interactions were seen during the events of "Master Monk Guan," flashbacks, and the three-episode series finale. From what the viewers can glean, the two were once good friends.

Chase's lair is a volcano that has the shape of an evil face.

Chase's lair is only accessible through flight, as it is high up on a mountain, and has a long runway that seems to resemble the bottom jaw of a monster. His actual mountain is hollowed out and resembles a face. The door to Chase's inner sanctum is impossible to locate on your own, but it will open as a large and imposing stone wall. A recurring joke in the series is Jack getting slammed by the door. The door has two torches to either side of it.

The hallway to get into Chase's inner sanctum is a long and dimly lit one with torches on the sides.

The inner sanctum is a large series of staircases, open rooms, and pools of water. The whole area glows blue and shining white, and there seems to be an endless amount of rooms.

Chase can often be found in his large dining room, eating a large spread of food, usually including a dish or two made from dragons.

This is the room where Chase trains his Jungle Cats and fights Master Monk Guan in the episode Master Monk Guan. It has mirrors that pop up from the ground to confuse opponents, and it also has a fire ring, moving platforms, and a spinning crop blade that can rake across the floor, Jack was the one who turned most of these things on.

Chase's throne room has a large chair and is the main spot for Chase's Jungle Cat minions. In the episode The New Order, it appeared to have changeable ceiling styles, going from the night to sunset, to midnight, to dusk.

The pool is a little area that has a small gleaming pool that gets connected from a little room. Wuya was seen there in the episode Oil in the Family, where she was feeding grapes to a crow. She is often seen sulking near here when she senses a new Shen Gong Wu.

The roof is a small platform that is surrounded by lava, it is only seen in the video game, but it is hinted it exists in the show.

He has numerous enemies from both the Heylin side and the Xiaolin side. These include the Xiaolin monks (i.e. the main characters, but more so Master Monk Guan), Wuya, and Hannibal Roy Bean. Jack Spicer is a fan of his, but in Chase's eyes, he is an insect. He does know about the minor villains, such as Tubbimura, Katnappé, Vlad, and Cyclops, as seen in "Saving Omi." During season two, however, Chase wanted to get Omi on his side, knowing Omi would one day grow strong enough to defeat him.

Chase, although a master of martial arts and sorcery, does have a weak spot. During the Heylin Eclipse, he is weakened, and all of his jungle cats fall into a deep sleep. In the episode 'Hannibal's Revenge', Wuya and Hannibal Bean team up at the time of the eclipse, turning against him to steal his Shen Gong Wu. 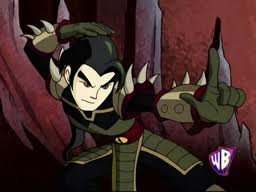 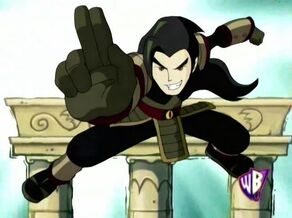 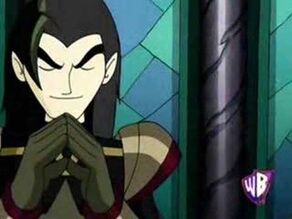 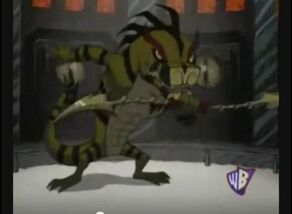 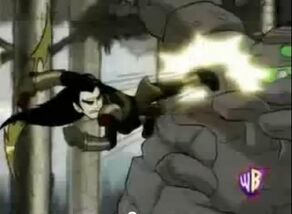 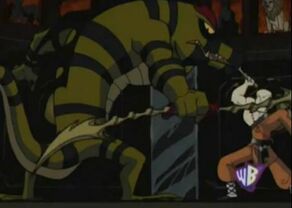 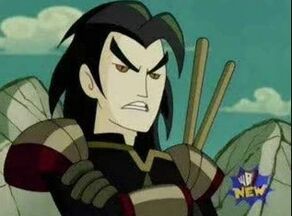 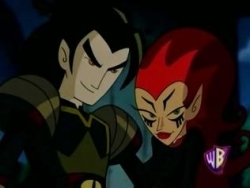 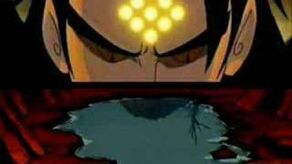 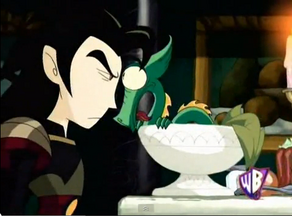 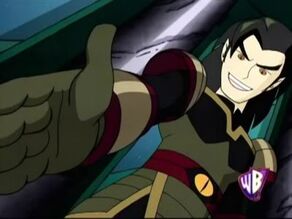 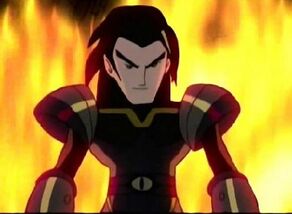 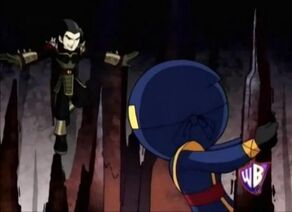 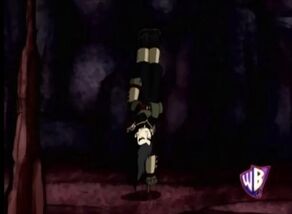 Retrieved from "https://villains.fandom.com/wiki/Chase_Young?oldid=3801136"
Community content is available under CC-BY-SA unless otherwise noted.