Evil Sorceress
Chatana is an ancient winged sorceress who conjured terrible monsters in an attempt to rule Vallestrella, only to be stopped and imprisoned inside a magically-sealed vault. Once freed by Ash and Esteban, she becomes a major antagonist in the third season of the Disney Junior TV show Elena of Avalor.

She is voiced by Gina Torres.

Chatana has long black hair with blue highlights that she keeps in a ponytail with braids on top of her head along with brown eyes and olive skin. On her eyelids is green eyeshadow. She wears a green robe, large gold earrings, and on her back are huge blue feathered wings.

Chatana is an evil and power-hungry sorceress who’d use her powers to conjure terrible monsters in an attempt to take over Vallestrella, not caring that they nearly destroyed it and Maru. Her uncaring nature extends to the monsters she creates, as while she does briefly mourn Chiki-Chiki’s loss, when Pili points out that she can simply make another one, she quickly gets over the fact that he got captured. She thrives on being evil, so much so that it is Pili confirming that Ash and Esteban are both evil that convinces her to join them. She is also clever as she thought to use Chiki-Chiki to distract Elena, Mateo, and Skylar so that she could escape her imprisonment without them seeing her.

A long time ago, Chatana would conjure terrible creatures in an attempt to conquer Vallestrella, only to be stopped by the Maruvians. She was imprisoned inside a magically-sealed vault and her golden diadem, the source of her powers, was taken from her.

In "The Last Laugh", Ash and Esteban attempt to free her from her prison in order to have her join their evil alliance only to discover that the vault she is kept inside of is boobytrapped. Regardless, Elena and Mateo end up unintentionally freeing her when they read the inscription on the wall, so she sends her Chiki-Chiki to distract them while she and her pet Pili search for her golden diadem, the source of all her powers. The Chiki-Chiki ends up getting captured by Elena, Mateo, and Naomi, and while Chatana does mourn his loss for a moment, she gets over it once Pili points out that she can simply make another one. She is then met by Ash and Esteban, who introduce themselves and explain why they freed her. Chatana is at first reluctant to help them, but Ash shows her that she has her diadem and promises to give it back to her once they’ve succeeded. Chatana asks Pili what he thinks, and after he confirms that both Ash and Esteban are evil, she agrees.

In “Giant Steps”, Chatana, Pili, Ash, Esteban go to Vallestrella, which they are able to enter thanks to the help of their new ally Tziloco. They plan to recruit Kizin, one of Chatana’s most powerful giants, as a part of their alliance. On the way there, Tziloco detects that someone is using magic to locate them and Esteban quickly deduces that it must be Elena, so Ash uses a cloaking spell. However, Chatana realizes that they still might be found, so she conjures several aranaguilitas as a diversion. Eventually the villains reach the mountain where Kizin is imprisoned and Ash frees him with a spell. Kizin is at first delighted to see Chatana but then becomes upset because she didn’t come for him sooner. Chatana tries to explain that she was imprisoned and pleads for him to help her and her allies, but Kizin refuses and nearly steps on the villains, forcing them to abandon the giant. While leaving Vallestrella, Chatana shows sadness over the fact that they’re leaving without Kizin and becomes visibly angry when Pili claims he never liked him anyways, though Ash promises that the next allies they recruit will be far more powerful.

In the series finale "Coronation Day" Chatana and the others travel to Nueva Vista to search for the Shadow Gateway, the barrier keeping the Shadows of the Night out of the EverRealm. Chatana finds a clue that reveals the Gateway is under the sea. A moment after reaching the Gateway, Elena's group arrives and attacks Ash's army. During the battle, Chatana blasts Mateo with her magic then conjures a giant flying jellyfish monster. Gabe, Naomi and the Jaquins fight hard against it but without success. But then, Isabel shoots the jellyfish with one of the potion-holding arrows she invented and the spell shrinks it until it's very small much to Chatana's horror. Mateo then hits Pili with a freezing spell. Furious, Chatana prepares to conjure another monster, but before she can finish the spell, Princess Marisa slams her to the ground knocking her diadem off and Gabe grabs it up. Before she can attempt to get it back, Migs grabs her and fly's her to Naomi who quickly imprisons Chatana in her Milagro. Antonia then takes her, and the frozen Pili and Tziloco back to Avalor Palace and locks them up in the dungeon. 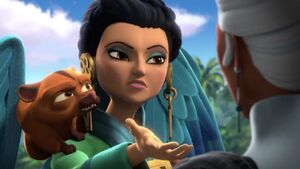 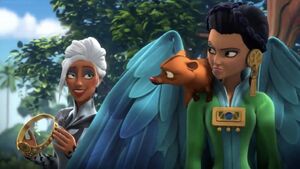 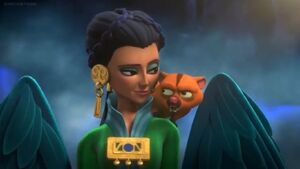 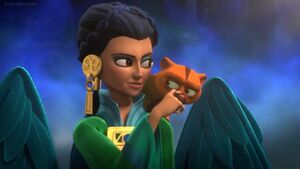 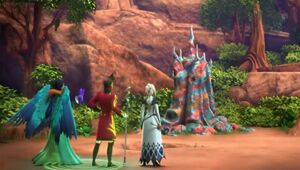 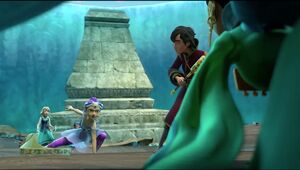 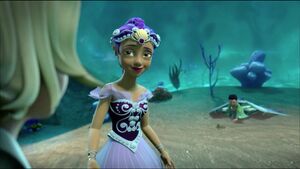 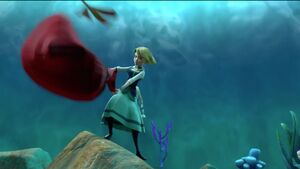 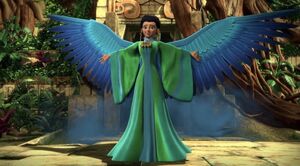 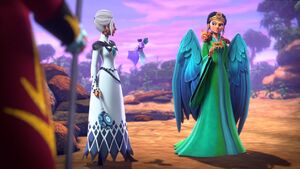 "It's only a matter of time before they find us... 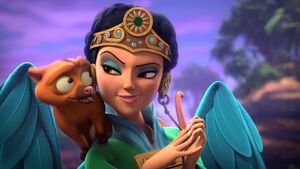 unless I create a diversion." 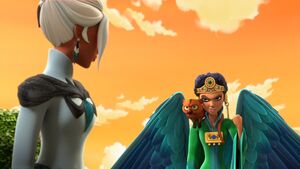 "It won't matter once we release my most powerful creature." 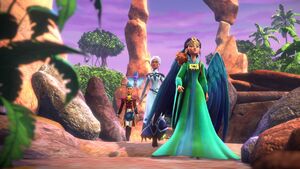 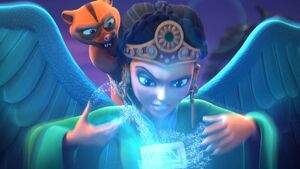 "Legs of a spider Black as the night 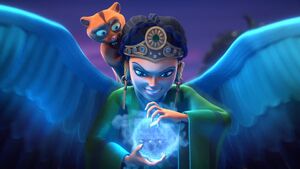 Wings of an eagle A web woven tight 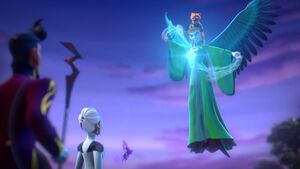 Fast as the wind Sharp as a bite 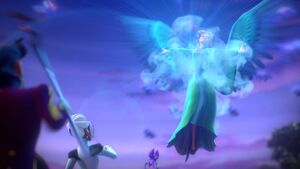 Conjure a creature to give them a fright! 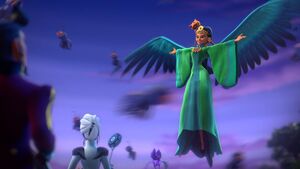 Retrieved from "https://villains.fandom.com/wiki/Chatana?oldid=3984498"
Community content is available under CC-BY-SA unless otherwise noted.