Splitting off into multiple copies, speed

Cheech the Pentipede is a centipede and the main antagonist of the 1995 game Apeiron X, a remake of the 1980s arcade game Centipede. He is essentially a vermin that attacks the player with his fellow vermin like Groucho the Flick and Larry the Scobster.

Cheech starts at the top of the screen and works his way through the mushrooms to reach the player. If he reaches the bottom, several clones will appear to overwhelm the player. If shot in the body, the back segment will grow a head and become another Cheech. If Cheech touches the player, it is an instant kill.

Cheech is the only enemy in the game that is affected by Gordon the Gecko's poison mushrooms. If he touches one, his whole body will plummet towards the bottom of the screen in a straight line.

Cheech appears in-game as a green centipede with round body fragments. He has a small head with two large eyes and antennae.

In the game-over screens and the logo, Cheech is seen with many hands and a yellow mouth with teeth. He has a large dark green nose and wears a red bow tie and hat. He sits on top of a blue mushroom smoking hookah. 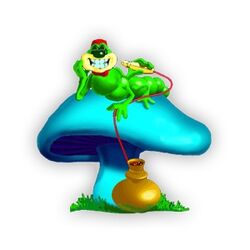 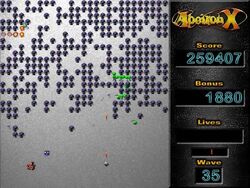 Cheech during gameplay
Add a photo to this gallery

Retrieved from "https://villains.fandom.com/wiki/Cheech_the_Pentipede?oldid=3458909"
Community content is available under CC-BY-SA unless otherwise noted.