Barbara Minerva, also known as Cheetah, is a major antagonist of the Injustice series. She serves as a supporting antagonist in Injustice 2 and in the comic series of the same name.

She is voiced by Erica Luttrell, who also portrayed Laura Washington in the CW tv series, Arrow.

Barbara Minerva appearance is that of a Cheetah. Her fur is almost none making her mostly nude but her body is somewhat covered with dark spots and her hair is long and red. She also has more muscles and actual claws.

Barbara Ann Minerva was the ambitious, selfish, and spoiled archaeologist who claimed the powers of a god, unaware that she would be cursed for life by transforming her into the supervillain Cheetah. Now, Cheetah uses her primal powers to exact revenge on Wonder Woman, pulling her out of hiding in hopes of causing her doom.

After the fall of Superman's Regime, Cheetah joined the League of Assassins in their goal to protect nature by causing a mass human genocide. This plan was partially stopped by Batman and his allies by destroying the League's base in the Amazon Rainforest, but they failed to stop the League from drowning Washington, D.C. with an inescapable tidal wave.

Later, Cheetah was offered a spot on Gorrila Grodd's team: The Society, where her reward would be to kill Wonder Woman, her long time enemy.

She is first seen at Gorilla City as a member of the organization named The Society led by Gorilla Grodd for the sole purpose of dominating the world after the defeat of Superman and his regime. Grodd later sends her to Atlantis where she confronts Green Lantern, a former member of the regime to whom she asks where Wonder Woman is hiding, to which the hero replies that he does not know but she does not believe him and the two are only beat for Cheetah to be beaten. Later in Metropolis, Cheetah confronts Supergirl and beats her with her magic claws that can hurt the Kryptonians. As she tortures the young woman, Wonder Woman attacks her from behind, dislocating her shoulder as he passes. After putting his shoulder back in place, Cheetah admits to joining the Society only to kill the Amazon but defeated by his rival. Wonder Woman catches her by the blow and gets ready to finish until Harley Quinn stops her, Cheetah is not reviewed after that.

Barbara had superhuman strength and speed, durability, retractable claws, and heightened senses. While not quite at Wonder Woman's level, she is more than capable of handling her in hand-to-hand combat. Cheetah is also an expert martial artist; using her strength and natural fighting skills to hold her own against Wonder Woman, and Hal Jordon. 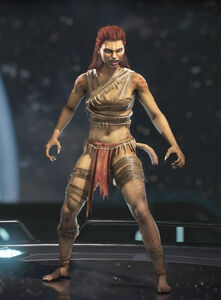 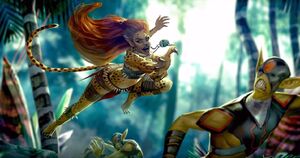 Cheetah in the epilogue. 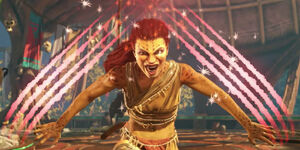