To find every Troll and take them back to Bergen town for the Bergens and King Gristle to eat and feel happiness, so she can overthrow King Gristle and rule as queen (failed).

Chef is the main antagonist of DreamWorks's 33rd full-length animated feature film, Trolls. She is the head chef of the Bergen castle. 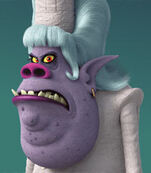 Retrieved from "https://villains.fandom.com/wiki/Chef_(Trolls)?oldid=2194439"
Community content is available under CC-BY-SA unless otherwise noted.